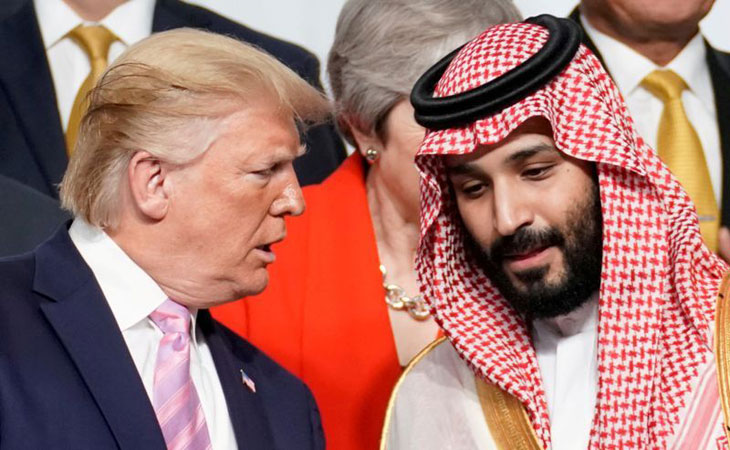 In an April 2 phone call, Trump told Saudi Crown Prince Mohammed bin Salman that unless the Organization of the Petroleum Exporting Countries (OPEC) started cutting oil production, he would be powerless to stop lawmakers from passing legislation to withdraw U.S. troops from the kingdom, four sources familiar with the matter told Reuters.

The threat to upend a 75-year strategic alliance, which has not been previously reported, was central to the U.S. pressure campaign that led to a landmark global deal to slash oil supply as demand collapsed in the coronavirus pandemic – scoring a diplomatic victory for the White House.

Trump delivered the message to the crown prince 10 days before the announcement of production cuts. The kingdom’s de facto leader was so taken aback by the threat that he ordered his aides out of the room so he could continue the discussion in private, according to a U.S. source who was briefed on the discussion by senior administration officials.

The effort illustrated Trump’s strong desire to protect the U.S. oil industry from a historic price meltdown as governments shut down economies worldwide to fight the virus. It also reflected a telling reversal of Trump’s longstanding criticism of the oil cartel, which he has blasted for raising energy costs for Americans with supply cuts that usually lead to higher gasoline prices. Now, Trump was asking OPEC to slash output.

A senior U.S. official told Reuters that the administration notified Saudi leaders that, without production cuts, “there would be no way to stop the U.S. Congress from imposing restrictions that could lead to a withdrawal of U.S. forces.” The official summed up the argument, made through various diplomatic channels, as telling Saudi leaders: “We are defending your industry while you’re destroying ours.”

Reuters asked Trump about the talks in an interview Wednesday evening at the White House, at which the president addressed a range of topics involving the pandemic. Asked if he told the crown prince that the U.S. might pull forces out of Saudi Arabia, Trump said, “I didn’t have to tell him.”

“I thought he and President Putin, Vladimir Putin, were very reasonable,” Trump said. “They knew they had a problem, and then this happened.” Asked what he told the Crown Prince Mohammed, Trump said: “They were having a hard time making a deal. And I met telephonically with him, and we were able to reach a deal” for production cuts, Trump said.

Saudi Arabia’s government media office did not respond to a request for comment. A Saudi official who asked not to be named stressed that the agreement represented the will of all countries in the so-called OPEC+ group of oil-producing nations, which includes OPEC plus a coalition led by Russia.

“Saudi Arabia, the United States and Russia have played an important role in the OPEC+ oil cut agreement, but without the cooperation of the 23 countries who took part in the agreement, it would not have happened,” said the Saudi official, who declined to comment on the discussions between U.S. and Saudi leaders. The week before Trump’s phone call with Crown Prince Mohammed, U.S. Republican Senators Kevin Cramer and Dan Sullivan had introduced legislation to remove all U.S. troops, Patriot missiles and anti-missile defense systems from the kingdom unless Saudi Arabia cut oil output. Support for the measure was gaining momentum amid Congressional anger over the ill-timed Saudi-Russia oil price war. The kingdom had opened up the taps in April, unleashing a flood of crude into the global supply after Russia refused to deepen production cuts in line with an earlier OPEC supply pact.

On April 12, under pressure from Trump, the world’s biggest oil-producing nations outside the United States agreed to the largest production cut ever negotiated. OPEC, Russia and other allied producers slashed production by 9.7 million barrels per day (bpd), or about 10% of global output. Half that volume came from cuts of 2.5 million bpd each by Saudi Arabia and Russia, whose budgets depend on high oil-and-gas revenues. Despite the agreement to cut a tenth of global production, oil prices continued to fall to historic lows. U.S. oil futures dropped below $0 last week as sellers paid buyers to avoid taking delivery of oil they had no place to store. Brent futures, the global oil benchmark, fell towards $15 per barrel – a level not seen since the 1999 oil price crash – from as high as $70 at the start of the year.