India will always get a ‘befitting response’ to LoC violations: COAS 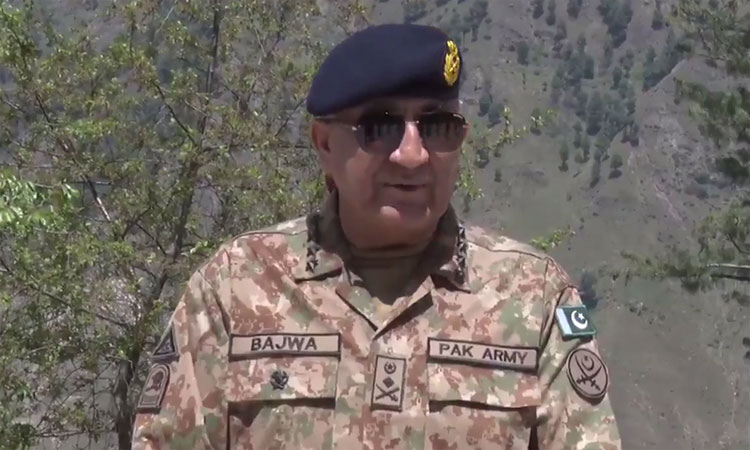 Chief of Army Staff (COAS) General Qamar Javed Bajwa on Wednesday said the Indian Army will always get a ‘befitting response’ to ceasefire violations along the Line of Control (LoC).

According to a statement issued by the Inter-Services Public Relations (ISPR), the army chief’s remarks came during a visit to the LoC where he was received by Corps Commander Rawalpindi Corps Lieutenant General Azhar Abbas. Gen Bajwa was briefed about the latest violations by Indian forces ‘deliberately targeting innocent civilians along LOC’ and the army’s response, said the statement.

“Blatant atrocities by Indian occupation forces on innocent Kashmiris and unethical targeting of civil population in [Azad Jammu and Kashmir] is unacceptable,” Gen Bajwa said, adding that such provocations by Indian forces are ‘a threat to regional peace and stability’ and that the Indian army ‘shall always get a befitting response’ to ceasefire violations. “Pakistan Army shall protect innocent civilians along LoC and defend honour, dignity and territorial integrity of motherland at all costs,” said the army chief.

Gen Bajwa noted with appreciation the operational preparedness and high morale of troops, said the ISPR statement, adding that the officers were lauded for their continued vigilance and professionalism. The army chief also acknowledged the strict adherence to Covid-19 protocols and the proactive assistance provided by troops to the AJK government in its fight against the disease. “Army will continue to support the national effort against the pandemic,” he added.

Meanwhile, a senior Indian diplomat was summoned to the Foreign Office on Wednesday to register Pakistan’s strong protest over the ceasefire violations by the Indian occupation forces along the Line of Control (LoC) on April 28, resulting in serious injuries to civilians.

“Condemning the deplorable targeting of innocent civilians by the Indian occupation forces, it was underscored that such senseless acts are a violation of the 2003 Ceasefire Understanding between the two sides, and are against all established humanitarian norms and professional military conduct,” the Foreign Office said in a statement issued here. The statement added that Indian occupation forces along the LoC and the Working Boundary (WB) continuously target civilian populated areas with artillery fire, heavy-caliber mortars and automatic weapons and this year alone, it committed 913 ceasefire violations. “These egregious violations of international law reflect consistent Indian attempts to escalate the situation along the LoC and are a threat to regional peace and security,” it said.

It was stressed that by raising tensions along the LoC and the WB, India cannot divert attention from the grave human rights situation in the occupied valley of Kashmir. Indian side was called upon to respect the 2003 Ceasefire Understanding; investigate this and other such incidents of deliberate ceasefire violations and maintain peace along the LoC and the WB. The Indian side was also urged to allow the United Nations Military Observer Group in India and Pakistan (UNMOGIP) to play its mandated role as per the United Nations Security Council (UNSC) Resolutions. Meanwhile, Indian troops, in their fresh act of state terrorism, martyred two more Kashmiri youth in Indian-held Kashmir on Wednesday. The Indian occupation forces martyred the youth during a cordon-and-search operation at Melhora in Zainapora area of Shopian district. The killing of the youth triggered massive anti-India demonstrations in the area. Indian troops fired pellets and teargas shells to disperse the protesters, triggering clashes between the demonstrators and Indian forces. One youth suffered pellet injuries and was shifted to a local hospital in Srinagar for treatment.