China’s rise and the US — the possible outcomes

Unquestionably, China has emerged as a rising power, becoming “America’s Achilles Heel”. The US has been suggested by foreign policy analysts to accommodate China peacefully, otherwise, the war might happen between the two. Also, China is alarmed not to resist the US everywhere and rise steadily. Offensive Realist John Mearsheimer in his book The Tragedy of Great Power Politics argues that China is not offensive as compared to the US. Washington is passing buck to states hostile to Beijing to disturb it. The motive is to prevent China from rising as regional hegemon or in narrow terms a global power. Thus, for US, China’s rise might be unsafe for its strategic interests. Apart from attacking China, an alternate and viable option for the US is to block China economically which seems also difficult. China’s soft power strategy is thriving across the world. For these angles, China’s journey to global power is a feasible dream.

Although the current world seems unbalanced multipolar world, the US has enough time to think how it will be destructive in case it tries to ignore China’s military and economic prowess

In Accommodating Rising Powers by TV Paul many suggestions were extended to the US for accommodating China peacefully. Importance of morality and avoiding an arms race were highlighted. Steven Lobell argues that China should avoid a blue water navy capability. Lobell notes that in case China managed to balance the US’ grand strategy “Command of Commons” (land, sea, air, and space) that might provoke the US and is a sign of instability. Also, Lobell suggested the US to focus on the “target balancing” and “specific threats” against China. I understand that the “target balancing” of the US against China might result in the alliance of Russia and China to tame the US. The better solution is to accept China as an emerging global power.

Mearsheimer argues that unbalanced multipolar world is dangerous for world peace. Also, Mearsheimer glorifies offensive deterrent force based on mutually assured destruction between the belligerent states. Essentializing World War II as an example, states engaged in warfare tried to defeat their opponents with conventional weaponry and hence, superiority in military and economic affairs would determine their victory. However, in the context of nuclear world, the case is dissimilar. Kenneth Waltz, defensive realist argues that few nuclear weapons based on fear and second-strike capability might deter any mighty nuclear state. Although China’s nuclear force is asymmetrical to the US, its nuclear force is invulnerable to attack. Therefore, this provides Beijing second-strike capability to retaliate in case US might think to cross the nuclear Rubicon. Beijing also has supersonic missiles which might penetrate any defence system including the US. Although the current world seems unbalanced multipolar world, the US have enough time to think how it will be destructive in case it tries to ignore China’s military and economic prowess. 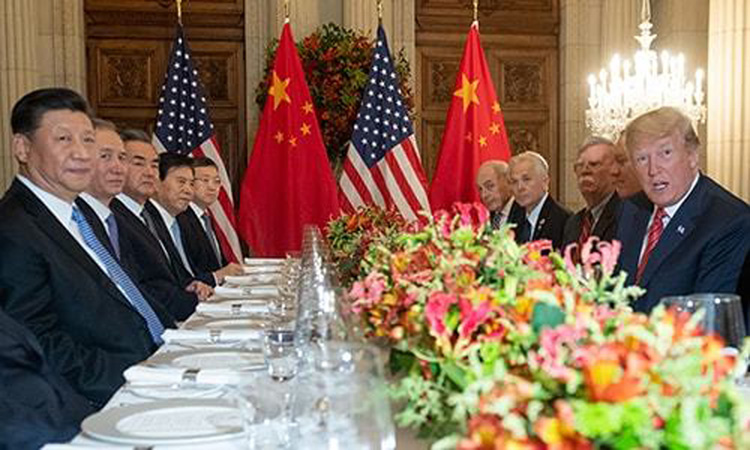 Mearsheimer argues China’s economic prowess will help it to dominate Asia the way the US dominates the Western Hemisphere. However, the US will attempt everything to prevent China from achieving regional hegemony. The US’ interests in South China sea induces it to support India, Japan, Singapore, South Korea, Vietnam and even Russia to contain China’s power in Asia. The question arises, why these states will join the US to contain China in case it rises peacefully?

Historically, the US used several elements like military intervention, use of force and economic sanctions to both coerce and dominate the world politics. In comparison, China is less aggressive than the US and might rise peacefully in case Washington allows it to do so. As I mentioned above, China possesses sufficient nuclear force to destroy the US, thus, Washington should ignore pre-emptive strikes on nuclear facilities in China. Nuclear war is a suicide and nobody wins a suicide pact. Thus, it is in interest of the US to accommodate China peacefully.

Although China is the second largest trading partner of the US after Canada, Washington is viewing China as a threat by dominating Asia-Pacific. Under the Donald Trump administration, the US has imposed heavy tariff on Chinese goods which eventually culminated into a trade war between them. It is logical for the US to resist China from rising economically which is primary element for improving its military strength.

China has shown potential to take the world by its soft power capabilities including economic and military prowess. Also, Covid-19 crisis had indicated that US no longer remained a dominant power and China might have surpassed the US quite earlier as several studies have concluded that china might surpass the US in a decade. The way China is responding the Covid-19 crisis is praiseworthy and states which got severely affected by the virus received much needed help from China. Expectation was on the US, but it miserably failed to deliver its capabilities in the current scenario. The United Kingdom, France and Germany ignored the US sanctions by supplying necessary medical equipment to Iran to combat Covid-19. Although Donald Trump is hesitating to acknowledge its weaknesses to fight the Covid-19 in his country, the US have received medical help from its opponents like Russia and China. It is not easy for a dominant power to accommodate its enemy or allow it to take the world. Thus, the chances of war are also likely when one state challenges the dominant position of other superior power.

The US’ flawed foreign policies like its war on Iraq and Afghanistan has exposed its potentiality of dominating the world. Raymond Hinnebusch argues that the US’ invasion on Iraq was the most controversial and momentous foreign policy decision in recent memory. Thus, the US paved the price by showing its weaknesses to handle the worst hit areas. The Covid-19 crisis has also exposed US’ weaknesses to guide the world. China’s peaceful rise can be expected because it is less violent than the US. China has not improved its nuclear force. Its nuclear force is sufficient for secure deterrence and also invulnerable to attack. Thus, the US should accept the reality and accommodate China peacefully before any miscalculation might happen.

Rameez Raja is a Kashmiri researcher. He has completed his PhD in Political Science from the Department of Political Science, Jamia Millia Islamia, New Delhi. His area of interest includes international politics, security studies and nuclear policy issues. His articles have previously appeared in many journals, blogs and newspapers. He can be reached at [email protected]