Digital blockade in Kashmir: Another tool in the tyranny’s toolbox

Among the many great ideas that have changed the world, the information revolution occupies a preeminent position. Initially, the information superhighway or the Internet promised to transform time-and-space dimensions as never before. It inspired disruption of the traditional social, cultural, and political barriers, presaging the democratization of even those societies that do not possess an open and democratic social order or political culture.

As potential tools to empower citizens, the Internet and mobile phones aspired to transcend boundaries and create opportunities to form individual connections on the global scale and create new cosmopolitan communities. In effect, these platforms collectively held out lofty promises to give voice to voiceless and emancipate those suppressed.

Well, not so fast!

It turns out that the euphoria was short-lived. Generally, these technologies have lived up to end-user expectations but not so much in empowering the socially or politically disenfranchised. This is because the world’s tyrants had other ideas. Instead of empowering citizens, the Internet and cell phones are increasingly used as tools of political repression.

People everywhere depend on the Internet for not only the news but also for education, healthcare, commerce, employment, and a variety of other civic engagement activities. India’s net neutrality rules allow for equal treatment of all content without privileging selective content, or gatekeeping websites through such “practices like blocking, degrading, slowing down or granting preferential speeds or treatment to any content”.

That brings us to digital repression in Kashmir, where the BJP government is following a policy of political suppression through digital exclusion, informed by their settler-colonial agenda. A Kashmiri’s lived experience flies in the face of the empty rhetoric of the shape shifter prime minster who has boasted of a “Digital India where access to information knows no barriers.” 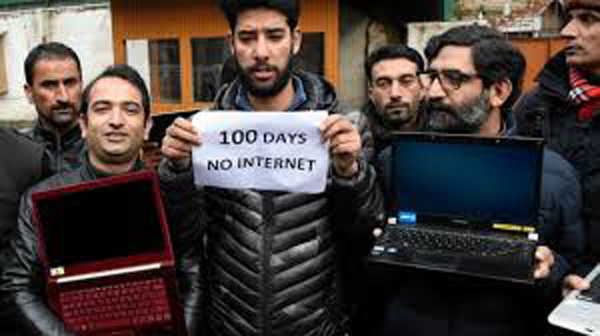 India has learned from other occupying regimes that digital blockade works. A benefactor of India, Israel, is one of the worlds’ leading sources of vicious digital surveillance and Artificial Intelligence-based-software that have been battle-tested against the Palestinians. India has learned from the Israelis how to leverage digital technologies to carry out repression and perpetuate the occupation.

Their tools of the repression include but are not limited to censoring, filtering, and monitoring all forms of web and cell phone usage. This through completely shutting down or slowing down of internet speeds from 4G to 2G, tapping of landlines and cell phones, monitoring of social media and other forms of web activity, tracking emails of individuals and groups, and closing internet café’s, etc.

The singular goal of these anti-Kashmir measures is to prevent mass mobilization by the disaffected populace, more importantly, by the youth.

Like all other occupying forces, they aim to prevent people from communicating, organizing and broadcasting their messages of resistance. By laying a digital veil on their activities, the Indian state seeks to perpetuate its occupation of a restive people who want a divorce from a manufactured consent. My apologies to Shelly, who said, “… Truth be veiled, but still it burneth …”

Through various tactics, the Indian rulers have tried for decades to outlaw political dissent and supplant the resistance narrative with alternative political realities through implanted rulers, armed government mercenaries, and paid journalists. The digital blockade and crippling restrictions on political and civil liberties are used in tandem with, and invariably precede, viciously militarized crackdowns. The rampant use of pellet guns, deliberately targeting protesters’ heads, has made thousands of children, and young boys and girls wholly or partially blind.

Camillo Pasquarelli of the Time magazine has captured the plight of these hapless victims of pellet guns with her heartrending photographs. A joint physicians for Human Rights/INCLO expose on pellet guns has noted that these ‘lethal in disguise’ devices, also known as Kinetic Impact Projectiles, disfigure and kill in equal measure. The daily Indian Express has quoted an Indian ophthalmologist, who treated some of the victims, as saying, “Pellet guns shouldn’t be used here [Kashmir] or anywhere,” and that such “such injuries” are seen only during the war.

Any attempts by the local news media to highlight the human costs of use of excessive force or the consequences of frequent communication blockades on people’s health, education, tourism, and commerce are put down with sledgehammer tactics. The repressive state deploys internet trolls who resort with impunity to harassment of journalists through indirect threats of death and rape. The state machinery financially constrains local media houses by apportioning lucrative government advertisements to favored media outlets that toe the government line.

Recently, some Kashmir-based journalists have been imprisoned and slapped with dubious terrorism-related charges for writing stories perceived by the state as adverse to the interests of the occupation. When the journalists defy the state’s crackdown on them, persisting with reporting the true nature of the protests against the Indian rule, they are charge-sheeted for spreading “fake news,” and booked for anti-national activities.

After visiting a local hospital where several victims of pellet guns had been admitted, Pamela Philipose of The Wire told Deutsche Welle, “[w]hen journalists challenge the official narrative and expose the truth, it rubs the authorities up the wrong way.”

As a measure of adaptation in a police state, the captive people become accustomed and make behavioral adjustments to escape the state’s wrath. Recently, after an artificial pause in protests – obtained through the use of concertina wires, curfews, and communication blockades – a group of Europe’s right-wing politicians was given a guided tour of the ‘calm and peaceful Kashmir’ to legitimize the unpopular actions of the government.

A Deutsche Welle post recently noted, “[w]hat is being shown is a picture of normalcy, to create an impression that life for Kashmiris was back on track while downplaying the critical reports in some international outlets and a handful of Indian news portals about unrest in the region.” What these for-sale

politicians willfully turn a blind eye to is that the people of Kashmir have been given the choice of silence through tyranny or the peace of the graveyard.

Many things have changed in Kashmir over the decades, but one thing hasn’t: For more than 72 years, the state has attempted to suppress the resistance movement using all tools in their anti-insurgency toolkit, and for an equal number of years, they have failed to do so. The means and methods of repression have evolved and become more sophisticated, but there has not been any change in public perception of India as an occupier.

The repressive state’s propaganda machinery has not been able to manipulate the information environment to turn people away from the liberation sentiment. And today, the relentless suppression by New Delhi is matched only by complete and irreversible alienation of the Kashmiris. And it is New Delhi that is to blame.

Lately, scapegoating Pakistan has been bringing diminishing returns. False-flagging and lambasting Pakistan and invoking national security to curb citizen’s right to information through unhindered access to the Internet is no substitute for resolving a festering political dispute that has lingered no matter the methods or the scale of state repression.

The international community has a role to play to bring an end to the misery of voiceless people in all occupied territories. Just as the occupying powers everywhere seek to suppress self-determination movements with brute force, so too must the free and open democratic societies and international agencies develop effective countermeasures to forestall the spread of the pandemic of political exclusion through digital repression.

Or else the much-hyped potential of the Internet to democratize and liberate societies will soon degenerate into humankind’s worst nightmare. The manipulation and control of the Internet run the danger of turning into a blunt tool for enforcing the state’s ruthless power. At risk is the freedom and lives of millions of repressed, voiceless, and subjugated people across the globe. Kashmir and Palestine top this list.

Tariq Ahmed is a North America- based freelance writer