Since his rise to power, Narendra Modi has propelled India into the throes of venomous Hindu nationalism that had remained submerged for decades. The ongoing Hindutva crusade is deviously bankrolled by wealthy expatriates in the West and elsewhere.

Madhav Golwalkar and Vinayak Savarkar were the most preeminent fountainheads of Hindutva project. While the former de-emphasized the religious dimension of Hinduism, putting a higher premium on Hinduism as an ethnic, cultural, and political identity, the latter was a proponent of the religious and cultural dominance of Hindus over non-Hindus.

Hindutva ideology remained the overarching themes of their speeches and writings. And, their zeal for Hindu nationalism was matched only by their dislike of Muslims and Christians. The duo drew inspiration from Italian fascist ultra-nationalists, Mussolini, and Mazzini, for whom the combined forces of masculinity, race, culture, and nationalism were the tools to be used against ‘others.’

Both admired German fascist Hitler, for his treatment of Jews and conceived his model as befitting for Hindu treatment of Muslims and other minorities in India. The beliefs and preaching of Savarkar and Gowalkar inform the politics of the ruling elites of the BJP today. His intense disdain for Muslims and Christians has earned Golwalkar the moniker of ‘guru of hate’.

To foster a singular religious, national identity amongst the Hindus, Golwalkar sought to unify Hindus in India and enable the creation of Hindutva networks among the diaspora in the West through a strategy of ‘long-distance nationalism.’ Since the beginning, the Hindutva has sought to emphasize the Hindu pride and assertiveness globally. To accomplish this, they have embodied the modus operandi of European fascism. 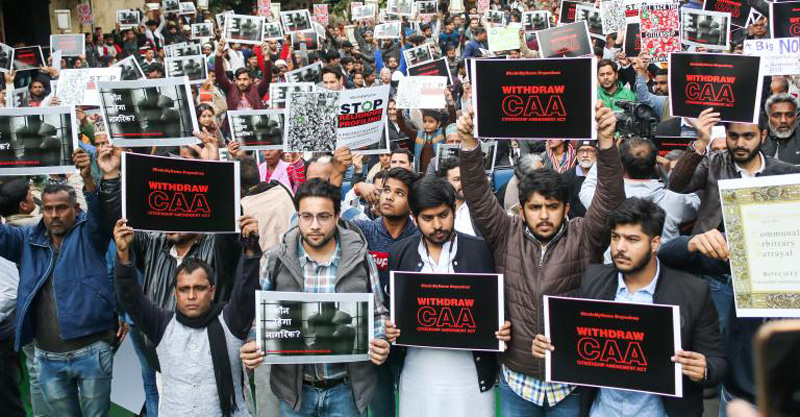 There are striking parallels between the twin 20th-century European fascist and Hindu nationalist ideologies, and the insidious ideology that informs and permeates the cadres of the ISIS in the 21st century. The ISIS espoused a Pan-Arab ultra-nationalism through the phraseology of Islam. Hindutva forces conflate Hindutva with Hinduism and appropriate latter’s percepts to subjugate India’s religious and other minorities.

The Hindu caste system resonates with the fascist belief in that the hierarchical inequality among people is both essential for and beneficial to human civilization. Thus, a rightwing interpretation of the ‘class collaboration’ principle espouses a social hierarchy based on low and high classes. A voluntary or even forced collaboration of all classes of people is necessary to achieve national security, stability, and prosperity.

The vision of the Sangh Parivar is to, one, organize and consolidate the Hindu society, and, two, serve and protect the Hindu dharma (religion). The Parivar aims at establishing a transnational/global network of Hindutva communities that will foster Hindu religious and cultural nationalism on a worldwide scale.

In Savarkar’s own words, ‘foreign races’ (Indian Muslims, Christians, Zoroastrians, Jews, and Sikhs) must be necessarily subordinated to Hindu nationalism, and they must ‘adopt the Hindu culture and language…respect and hold in reverence Hindu religion, [and]… entertain no ideas but those of the glorification of Hindu race and culture.’ These foreign races must subsume into the Hindu system of life and culture or perish.

Currently, a lot of social and political capital is spent in seeking recognition of Hinduism as one of the ‘American’ religions, alongside Christianity, Judaism, and Islam. Leveraging the Western liberal democracies’ ethos of diversity inclusion and multiculturalism, they seek to project Hinduism as a rational and tolerant religion deserving of recognition as one of the major religions in the West.

This message has particularly resonated with many Hindu immigrants to North America who, by being a racial, religious, and cultural minority, are challenged with the Christian perception of Hinduism as an outlandish and a ‘satanic religion.’ Thus, for the diaspora, the Hindutva camaraderie not only evokes a sense of belonging but also provides a social and political rallying point. After 9/11, Hindutva activists in the US, Canada and Australia have attempted, sometimes successfully, to portray a contrast between the ‘virtues of Hinduism’ with the ‘vices of Islam.’

As one research scholar notes, ‘organizations like the VHP appropriate the space of ‘cultural diversity’ for their exclusionary agendas.’ Hindutva forces contend that Hindus can be loyal to countries where they work and to India at the same time. These forces emphasize compatibility between the concept of karmabhumi (place of work) as a diasporic community and mathrubhumi (motherland) as Hindu nationalists. Noteworthy is the fact that these ultranationalists clamor for space on the progressive platforms invoking the West’s cultural diversity, pluralism, and tolerance, while at the same time, they violently deny the same to their minorities in India.

Some of the Hindutva communities seek legitimization by camouflaging as ‘do-good, feel-good,’ non-political charity organizations fostering civic and educational activities in India. It bears mentioning that the Hindu communities in India or the West are not monolithic. Hindutva forces confoundingly portray Hindu ultranationalism as synonymous with being a good Indian. They entrap some of their secular or otherwise unsuspecting supporters and donors through social and cultural booby traps.

This tuning in by many vocal, diasporic Hindus to the Hindutva ideology in North America, Australia, and elsewhere has engendered both moral and financial support to their parent organizations in India. Fundraising events are held regularly under the patronage of some local politicians who then unwittingly become the enablers of atrocities against Muslims and Christian in India. These events are cloaked in the soft power of exotic cultural festivals of fun: food, wine, and musical and dancing performances to Bollywood tunes.

The funds are then channeled to their networks in India and used both for their purported and sinister anti-minority activities. A group of Ohio State University researchers has noted that “the immigrants are sometimes unaware of the consequences of their ‘little help,’ which they believe is used by local organizations in India for good community works….[and] rarely do these Indian-Americans come to notice the real usage of their fat checks.” They further note that “it holds true that only a small fraction of the Indian immigrants in the US actually support the activities of organizations that openly endorse paramilitary violence” in India.

The Hindutva brigade in India, through their rank and file, has used their financial prowess in their anti-conversion, re-conversion (‘gharwapsi’), anti-Muslim and anti-Christian field operations. These vigilante operations, patronized by the Sangh Parivar at the local and national level, are marked by intimidation and unspeakable violence against the Christian and Muslim communities.

Recent testimony by a scholar of South Asia has cataloged some of the repressive strategies deployed by Hindutva forces. They have used verbal intimidation, physical torture, ransacking and looting of businesses and residential properties, molestation and gangrape of women, mob lynching and burning of dead bodies, burning and destruction of places of worship, and educational institutions, etc. The perpetrators — the angry young men and women of Sangh Parivar– take pride in describing themselves as ‘warriors of the Hindutva revolution’ and symbols of ‘authentic Indianness.’

Rarely have the perpetrators been arrested, or the victims handed justice. Some reports by Indian researchers and others have documented that during Gujarat pogrom in 2002, when Modi was leading Gujrat, the Muslim communities were the victims of ‘unimaginable acts of cruelty and violence as large mobs of Hindu nationalist cadre roamed the streets and systematically massacred the Muslim community.’

Reports by Human Rights Watch and Citizens Tribunal have revealed that large-scale violence was not any random acts of rage. Under Modi’s patronage, these acts of brutality were meticulously planned to target Muslims selectively. Ashis Nandy, a clinical psychologist, after an interview with Modi, has described Modi as “a fascist in every sense.” Nandy explained: “I don’t mean this as a term of abuse. It’s a diagnostic category (disease).” Accusing him of complicity, the US Department of State denied Narendra Modi’s visa for entry into the USA for being ‘responsible for or directly [carrying] out… particularly severe violations of religious freedom.’

It is high time for Western democracies, including the USA, to enact or enforce legislation such as Global Magnitsky Act, which empowers the U.S. Treasury Department to sanction individuals or entities involved in or enabling human rights abuses. If America must regain its moral authority in the world– from which it has woefully retreated in recent years–it must lead as an exemplar of respect for democracy, human rights, and the rule of law. The presumptive Democratic presidential nominee for 2020, Joe Biden, has opined recently that ‘as a nation, we have to prove to the world that the United States is prepared to lead…not just with the example of our power but also with the power of our example.’

It is time to call out and stop the global enablers of Hindutva fascism in India as everywhere. The time for America to lead is now.

Tariq Ahmed is a freelance writer based in North America