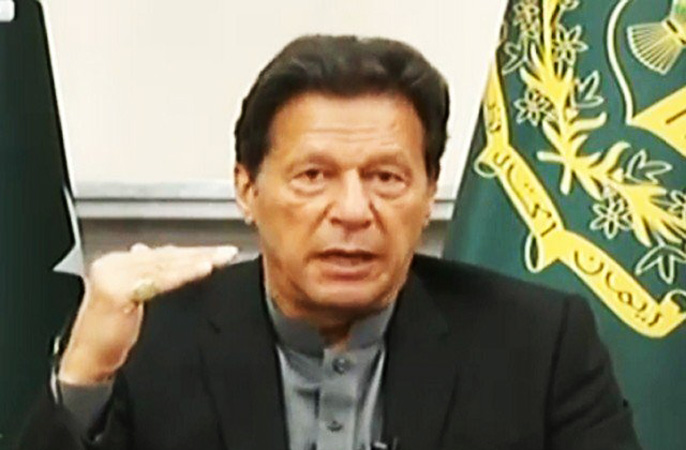 Prime Minister Imran Khan Tuesday said unlike the rich countries, including the United States and European states, which have been hectically trying to save their economies from the debilitating effects of coronavirus, his government faces a greater challenge of saving the poor population from dying due to looming hunger.

The prime minister, in a televised address to the nation, recounted how the Covid-19 is wreaking havoc with the world economy, and said nobody can predict how long the challenge will persist. Different countries are now opting to ease the lockdown. “The poor segments of society in the country have been facing hard times,” he added.

About prayers and congregations during the holy month of Ramazan, Imran Khan said in different Muslims countries, decisions have been made to keep the mosques closed to contain the spread of coronavirus. “We are a sovereign country and I get a bad feeling when I watch the police force resorting to baton charging during the lockdown. Ramazan is a period of praying and offering obligations, and nobody wants to close the mosques. In an independent society, the people are involved for taking decisions over the national issues with independent minds,” he added.

He said the fight against the coronavirus can be won only through collective efforts and full participation of the public as the virus does not discriminate among different strata of the society. He said with complete consultation of the country’s leading ulema, President Arif Alvi succeeded in developing a consensus leading to adoption of 20-point guidelines, which will be implemented strictly during the holy month. He also urged the nation to prefer offering religious obligations at homes and in case, they want to visit mosques, they should strictly follow the guidelines. However, he added that the government will be forced to review its decision and take action in case the virus infection spreads in any area. The factories and the construction sector have also been opened conditionally and the owners are bound to fully implement certain SOPs.

He said the Ehsaas Rashan Portal will provide succour to the poor, needy and deserving people after completion of their data. Deflating the opposition’s criticism with regard to Tiger Force, he maintained that it is a volunteer force which will not seek any monetary benefits. Its volunteers are out on the streets due to their sheer passion for humanity to collect relevant data. They will post the data of the deserving and philanthropists on the portal, he added.

The portal is a donor-beneficiary linking system for food distribution and has been set up to enable the private sector to reach the most vulnerable.

The prime minister said even the United Kingdom has shored up a volunteer force to face the situation. He said if need arose in the future, the government will also involve all other institutions.

About the return of expatriates, the prime minister said the provinces fear that it can spread the coronavirus for the moment as the health system is grappling with the existing cases. He said it is not possible to shut 220 million people or to get all of them tested, however they are learning from the global experiences. The isolation of infected persons is the key to overcome the pandemic, he added.

The prime minister observed that trials and tribulations always lead to test a nation’s resolve. Throughout the world, different affected countries are combating the pandemic, but once the threat subsides, it will be espied how a country managed to overcome the challenge.

He also reiterated his resolve to bring the hoarders and profiteers to book through the relevant laws, saying he considers such elements as ‘national culprits’ who want to take undue benefits by creating difficulties for the general public.

Earlier, the prime minister formally launched Ehsaas Rashan Portal, which is a donor-beneficiary linking system for ration distribution and set up to enable the private sector to reach the most vulnerable.

Meanwhile, Prime Minister Imran Khan has said demonstrations in various parts of the world are taking place against lockdown and perhaps now international community can understand sufferings of Kashmiris in the occupied valley facing brutal oppression by the Indian Forces. In a tweet, the prime minister said an inhumane politico-military lockdown is continuing in Indian-held Kashmir for over eight months now without any provision of medical, financial, communication or food assistance. He said in fact the racist Hindutva supremacist Modi government has ensured that Kashmiris are deprived of all basic amenities during lockdown.