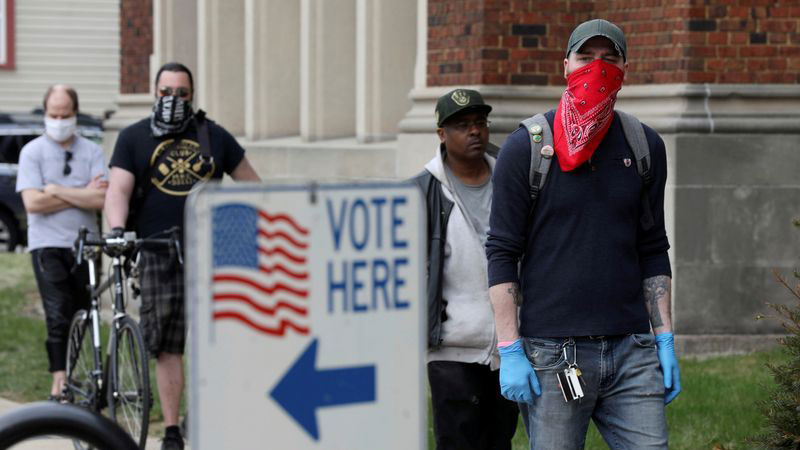 Congress is scrambling for ways to safeguard the Nov. 3 US elections amid the coronavirus pandemic, with a partisan fight shaping up over a Democratic proposal to require states to offer the option of voting by mail.

President Donald Trump, seeking re-election this year, and some of his fellow Republicans have voiced opposition to expanded voting by mail, citing concern over ballot fraud – a worry that Democrats dispute.

Democrats have said election procedures will need to change this year because many voters will be reluctant to stand in long lines or enter crowded polling sites for fear of infection. In recent years, Democrats also have accused Republicans of pursuing policies in some states to make voting more difficult in a bid to disenfranchise Democratic-leaning voters.

Congressional Democrats are pushing for additional funding for election aid to states in the next round of coronavirus-response legislation expected to be crafted by lawmakers in the coming weeks.

Democrats control the House of Representatives while Republicans control the Senate. House Speaker Nancy Pelosi has proposed seeking $2 billion to $4 billion in fresh election-related aid to states. Republicans have said they are open to considering some additional emergency funding if the $400 million in such aid approved in legislation passed on March 27 proves inadequate.

The focus of Democrats is on providing money so states can establish or expand existing “vote-by-mail” options under legislation requiring them to offer the option of mail-in ballots as an alternative to voting in person.

Wisconsin’s April 7 Democratic presidential primary was marred by numerous polling sites being closed due to staffing shortages caused by the pandemic while long lines of voters dressed in makeshift protective gear waited for hours to cast ballots. The state carried out the election after Republican legislators successfully sued to block the Democratic governor’s plan to postpone the voting for public health reasons.

Democratic US Senator Amy Klobuchar, spearheading the vote-by-mail effort along with House Administration Committee Chairwoman Zoe Lofgren, also a Democrat, dismissed Republican charges that they are trying to run the 50 states’ elections from Washington.

“We’re trying to make the elections safe, that’s all we’re doing,” Klobuchar said in a telephone interview, referring to the pandemic.

There has been a “sea change,” Klobuchar said, in attitudes outside of Washington toward voting by mail. Klobuchar noted that Republican Governor Chris Sununu of New Hampshire has announced mail-in voting in his state in November if coronavirus remains a threat.

Any election mandate from Washington sparks controversy in an American democracy in which a patchwork of state voting procedures are the hallmark of elections.

“You can’t use a crisis like this … to push the nationalization of elections,” said Representative Rodney Davis, the senior Republican on the House Administration Committee, which oversees federal aid to states on election security.

“What may work in an urban area may not work in an rural area,” Davis said in a telephone interview.

Trump during an April 7 coronavirus briefing said that “mail ballots are a very dangerous thing for this country.” He acknowledged he cast an absentee ballot by mail last month in Florida’s Republican primary.

“They’re fraudulent in many cases,” Trump added, without offering evidence.

A Reuters/Ipsos poll this month found that 72% of US adults, including 79% of Democrats and 65% of Republicans, supported a requirement for mail-in ballots as a way to protect voters in case of a continued spread of the coronavirus.

Democrats have said experience shows that mail-in voting has not generated significant fraud and Republicans can fare as well as Democrats in such elections.

The Bipartisan Policy Center, a Washington-based think tank, estimated the cost for boosting vote-by-mail capabilities at $1.5 billion. The nonpartisan Brennan Center for Justice at New York University Law School estimated it at closer to $2 billion.

In the 2016 presidential election, around 130 million votes were cast. Turnout this year could exceed that, according to some forecasts. In addition to the presidential race, a third of US Senate seats and all of the House seats are up for grabs, along with various state and local contests.

A national expansion of voting by mail would require states to procure millions of mail-in ballots and machinery to handle the returned ballots, pay for postage and train workers in just a few months, a House Democratic aide said.