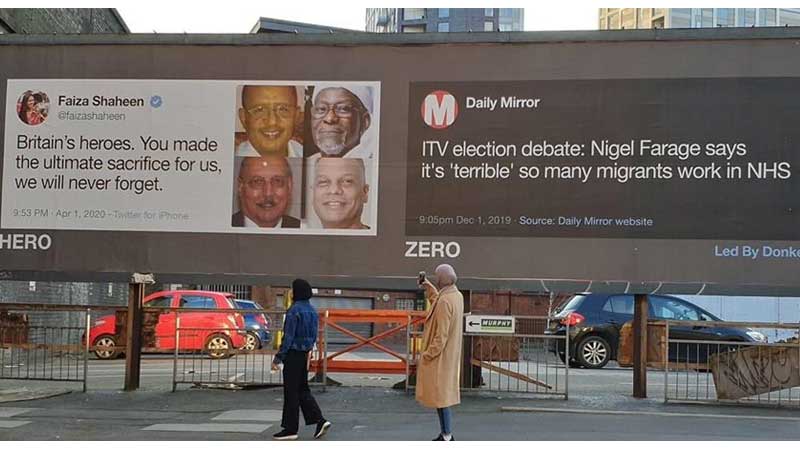 A strong and unified response by the British nation to fight the COVID-19 pandemic has exposed the anti-non-white migrants and Muslim rhetoric of the UK’s far right parties. British National Party (BNP), English Defence League (EDL) and their leaders including Nigel Farage and Tommy Robinson have been targeting immigrants and Muslims throughout their campaigns for years.

These right-wing extremists have been calling for an end to migration into the UK and non-white Britons to be stripped of their British citizenship. Similarly, they have been allegedly blaming British Muslims for all the problems in the UK ranging from crime to terrorism. Even the EDL launched a nationwide campaign “No New Mosques” in UK and wanted to remove all the Muslims from the country.

However, campaigners says the exemplary role of the foreign NHS workers and various religious communities coming together across the country in national war against coronavirus has defeated these right wing ideas of hatred and divisions among the British society.

Khadim Al’Hassan a voice of reason in the sea of rhetoric stated ‘the contributions of immigrants on front line NHS who have given their lives helping to treat British Citizens reveals what we have always known namely if it was not for their contribution the National Health system would falter and fail’. He said that the very people the far right have wanted out are now working without proper PPE’s or equipment’s putting their own lives at risk and even losing.

Khadim questioned where the voice of the right wing was now. He further said the reason they are silent is that they know if they get COVID-19 or become seriously ill there is a high probability they are going to come face to face with the person who they had wanted ‘out’. He said time has finally come for the far right and for the citizens of the UK to acknowledge the value and benefit ethnic minorities bring to the NHS and to society as a whole.

Khadim Al’Hassan who is a leading Barrister, further stated, “No one would argue that those individuals who commit crime should be treated like any other non-law-abiding individual who should face the wrath of the law. However to confuse crime and race is fundamentally wrong both legally and morally”.

Throughout the UK various groups have started campaigns social media questioning “where are the likes of Katie Hopkins and Tommy Robinson now? Saving our Great Britain.” One Facebook post by Becky Smith said the same Muslims that they’ve been alienating for all these years are now giving their lives for our country in NHS. She further said “I hope everyone that ever shared their crap and spouted hatred will hang their hands in shame now!!!.”

Muddassir Ali, brother of one of the victims of COVID-19 spoke to Daily Times, he said though he is heartbroken for losing his brother and thousands of people to the deadly virus. However, he said coronavirus has also dispelled the myths about the allegiance of British Muslims to this country. With tears rolling downs from eyes, Ali believes the only silver lining in the virus crisis is this has proved that we would live and die in this country.

According to figures, the first 10 UK doctors died during the pandemic catching the virus while on duty were foreign born, this also prompting the UK Health Secretary Matt Hancock to saying in a tribute “They came to this country to make a difference and they did. They made the ultimate sacrifice, we salute them”.

Similarly, to help authorities deal with the rising cases of deadly virus, mosques are being converted into makeshift hospitals and temporary morgues across the country. According to Dr Salman Waqar of British Islamic Medical Association (BIMA), a Bolton based mosque Masjid E Ghosia has been transformed into a 55-bed hospice for coronavirus patients.

Likewise, a mosque in Birmingham has turned its car park into a temporary mortuary which will store up to 70 bodies. The central Jamia Mosque Ghamkol Sharif in Golden Hillock Road will have five specialist refrigerated units. They will be used to cope with the expected increase in coronavirus deaths.

Furthermore, Muslim Hands UK leading charity and Fareshare (UK’s food redistribution charity) have joined hands to provide 4,000 meals everyday across the country during the virus pandemic. They said meals will reach those most vulnerable and will consist of nutritional food items to ensure that disadvantaged communities throughout the UK are being fed.

British Muslim scholar Dr Musharraf Hussain OBE said that during the current crisis period a national response to the coronavirus pandemic is going on, this is a time of unity and loyalty to our country. He said that our remarkable NHS members are doing a staff job. “Sadly our Prime Minister Boris Johnson has also fallen ill.” He urged all the British Muslims to pray for him and the country.