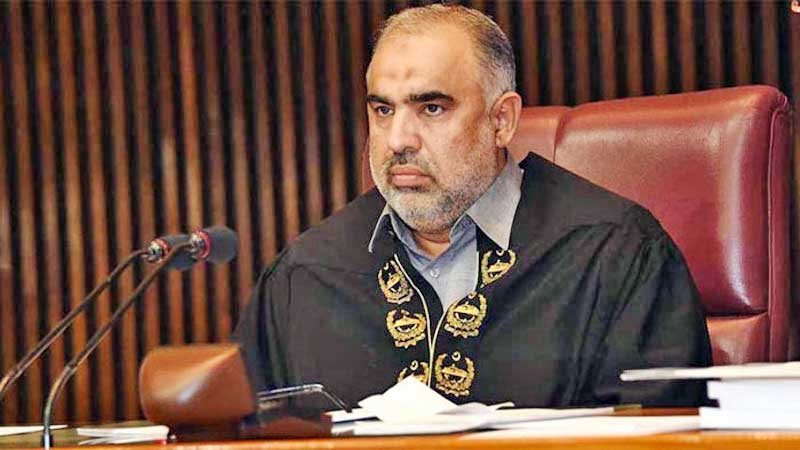 National Assembly Speaker Asad Qaisar Saturday said Parliament has done record legislation during the ongoing parliamentary year, adding that this is the toughest assembly so far to handle as the opposition and the treasury have very strong presence in the Lower House.

“It’s good to see the opposition supporting the government on key legislation, which is a good omen,” the speaker said in an interview with Daily Times here. “Being custodian of the House, the treasury and the opposition benches are equal for me. I am running the affairs in line with the rules and procedures,” he said, when asked how he has been able to strike a ‘fine balance’ between the opposition and the treasury benches. “It’s our responsibility to help frame new laws and rules which benefit the people. We have an understating we can’t politicise the legislation process,” he added.

Asked about the upcoming annual budget amid coronavirus outbreak, he said the National Assembly Secretariat has evolved a contingency plan for the upcoming budget session and in case the disease doesn’t die down by then, the plan will be implemented in consultation with the political leadership to get through with the budget session.

He outrightly dismissed the impression that the parliamentary business has been suspended due to the disease, saying the parliament’s special committee on coronavirus is in session and working to monitor the government’s action to contain the epidemic and providing relief to the masses. “The situation is under control so far, and we hope to commence the National Assembly session well before June. I have been briefed that hopefully we’ll be able to get over it,” he said.

Asked how much the disease will affect the overall parliamentary business this year, the speaker said that parliament’s business has been partially suspended. “Instead, we are holding regular meetings. We hope to overcome the epidemic,” he said, adding, “We have already done with the National Assembly business of 72 days out of the total 130 days. So we have around 58 days left and we will make it.”

The speaker said he has formed a parliamentary committee comprising leaders of major political parties, adding that the committee is monitoring the government’s response to counter the epidemic. “The government presents progress report to the committee which comes up with innovative ideas on how to take more effective steps to handle the situation,” he added.

He said Prime Minister Imran Khan has directed him to help facilitate the return of Zaireen, Tablighi Jamaat members and overseas Pakistanis stranded abroad. “I have formed another committee which includes key ministers and parliamentarians to help facilitate immediate return of Pakistanis stranded abroad. We have formed a subcommittee led by Safron Minister Shehryar Afridi which is doing a wonderful job and all religious parties are on board to facilitate Tablighi Jamaat members who are stuck abroad or within the country,” he said.

Asad Qaiser urged the US and the EU to lift sanctions on Iran on humanitarian grounds as the pandemic has hit the neighbouring Muslim country hard.

Asked about reaching out to the parliamentarians of the world who have contracted coronavirus and are currently hospitalized, Asad Qaisar said he has written letters to ailing Iranian Speaker Ali Larijani besides his counterparts from EU countries to express solidarity with all the leaders who have been hospitalized due to the epidemic. He also showed concern for ailing Prime Minister of United Kingdom Boris Johnson and wished him well.