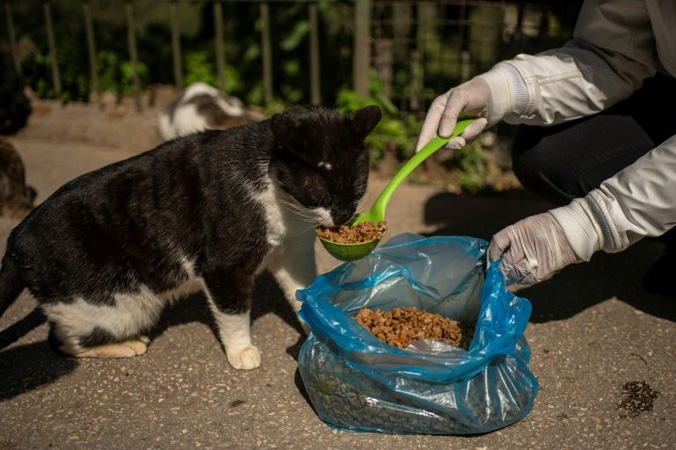 As coronavirus forces billions of people around the world into lockdown, another sizeable population has also been hard hit — stray animals.

While pet owners in many countries are still allowed to walk their dogs, thousands of other animals — the exact numbers are unknown — are starving and turning feral.

The mass closure of restaurants has also deprived hungry animals of leftover meals, forcing them to take greater risks.

For many, the restrictions are tantamount to a death sentence.

“We are seeing an increase in the numbers of cats in areas where we feed, some appear to have been abandoned, while others have roamed far from their usual spots in search of food,” says Cordelia Madden-Kanellopoulou, a co-founder of Nine Lives Greece, a network of volunteers dedicated to reducing the overpopulation of stray cats in Athens and other cities.

According to the municipality, the stray dog population in Athens is put at hundreds while the cats run into the thousands.

“It is a huge worry to us that strays could be exposed to more cruelty and poisoning, being more visible and hungrier now, and thus more likely to trust and approach people,” said Madden-Kanellopoulou.

Greek officials over the weekend said an online platform had been created for food donations and veterinary services for strays and pets whose owners are unable to care for them.

“During the lockdown, we make sure that all dogs have enough food so that they don’t become aggressive. This week we will also start installing feeders in different areas of the city making sure that dogs and cats are fed regularly,” said Serafina Avramidou, city of Athens councillor for animal welfare.

Avramidou said she has also already signed more than 350 permits for volunteers to visit feeding areas without getting fined.

In neighbouring Turkey, authorities in Istanbul distribute around a tonne of food for street cats and dogs every day.

‘We’ll care for your friends’

“We were taking care of strays even before the coronavirus,” Tayfun Koc, an Istanbul municipal feeding worker, told AFP.

“I say this to all our citizens, stay at home, we will take care of our little friends,” he said.

Authorities elsewhere in Europe are gradually realising that allowances must be made for stray populations.

After Spain went into a nationwide lockdown on March 14, Madrid officials closed down 125-hectare Retiro park in the city centre where around 270 cats live in 19 different colonies.

For days, volunteers were not able to enter. City hall authorities eventually allowed them to give food to park gardeners to distribute.

A single volunteer may also enter the park three times a week, for an hour at a time, to check on the health of the cats.

Mercedes Hervas, the president of the Association of Friends of the Cats of Retiro, says this was not enough time to check on them all and look after those in need of medical care.

On March 30, a park employee found dead a female cat that the group had been treating with antibiotics. Hervas predicted other cats would also die.

“You have to go from colony to colony and wait for the cat to come out. Maybe Olympic athletes can do it in one hour, we can’t,” she says.

Elsewhere in the Balkans, provision is more ad hoc.

In Serbia, where there is no state-organised effort to feed and shelter stray animals, people in several cities and towns have organised help locally.

A similar effort is under way in North Macedonia where NGOs are calling on people to leave food on the street for the estimated 10,000 stray dogs in Skopje.

In Croatia, about 40 animal shelters which had to close their doors for visitors are imploring citizens not to abandon their pets.

In Albania, locked-down citizens say it is impossible to secure permission to walk a dog, let alone feed strays, so people go out in secret.

“These measures taken for humans are effectively a death sentence for dogs and cats,” says Indrit Osmani who heads the Animal Rescue Albania volunteer group.

In Bulgaria, veterinary clinics ran an information campaign after pets were increasingly found on the street because their owners thought they may transmit the virus.

There was a similar campaign in Beirut, where Lebanese animal rights groups have reported an increase in abandoned pets.

The group, Beirut for the Ethical Treatment of Animals, last week said it had received “countless” calls concerning poisonings across the country, mainly around the capital.

Last month, it said that the number of abandoned pets had “at least tripled in recent weeks because of the panic” caused by the virus. But in a time of heightened health concerns, pets are not entirely safe even at home.

French veterinarians last week warned owners against attempting to disinfect their dogs and cats with detergent or alcohol gel.

The move came after images online showed dogs whose legs had been burned by disinfectants.

Not only are dogs and cats unable to digest alcohol properly, but these products can also cause respiratory irritation and skin reactions, Debove said.