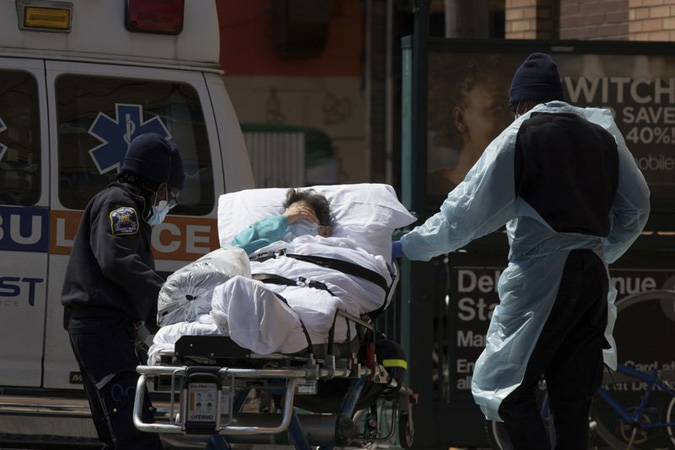 One medical worker called it “insane,” another said it induces paranoia – the speed with which patients are declining and dying from the novel coronavirus is shocking even veteran doctors and nurses as they scramble to determine how to stop such sudden deterioration.

Patients “look fine, feel fine, then you turn around and they’re unresponsive,” said Diana Torres, a nurse at Mount Sinai Hospital in New York, the epicenter of the pandemic in the United States, where the virus has infected more than 415,000 people. “I’m paranoid, scared to walk out of their room.”

It isn’t just elderly or patients with underlying health conditions who can be fine one minute and at death’s door the next. It can happen for the young and healthy, too, health professionals told Reuters.

A young woman died unexpectedly while nurse Laurie Douglas was on duty at Our Lady of the Lake Hospital in Baton Rouge, Louisiana. After 34 years on the job, Douglas said she normally has “an intuition of who is going to fade and who may improve.”

“But these people are throwing that out the window,” Douglas said. “Last week, she was planning her wedding. This week, her family is planning her funeral,” she said, referring to the deceased patient.

Patients might enter the hospital with strong oxygen levels and be engaged in happy conversation, said a resident emergency doctor at New York-Presbyterian Hospital, only to be “gasping for breath” and intubated a few hours later. “The scary thing is there are no rules to it,” said the resident, who spoke on condition of anonymity. These scenes are playing out everywhere as COVID-19, the respiratory disease caused by the new coronavirus, has infected more than 1.4 million worldwide and killed more than 83,400 as of Wednesday. Click https://tmsnrt.rs/3aIRuz7 in a separate browser for a GRAPHIC tracking coronavirus globally.

The quick turns for the worse are likely products of an “overly exuberant” reaction by the immune system as it fights the virus, said Dr. Otto Yang, an infectious disease specialist at the UCLA Medical Center in Los Angeles.

“I had a meltdown that night,” she said. “I cried to my boyfriend.”

In the case of COVID-19 patients, intubation refers to inserting a tube into the mouth and through the airway of a patient struggling to breathe, so they can be hooked to a mechanical ventilator.

Associated Press journalist Anick Jesdanun, who was in good health and had run 83 marathons, died last week from COVID-19, according to a post on Facebook by his cousin, Prinda Mulpramook.

Jesdanun, who was 51, at first didn’t need hospitalization, according to the post. He had begun to recover and showed clear lungs and strong vital signs during a doctor’s visit in late March. But “a sudden setback” sent him to the emergency room on April 1, and “13 hours later we lost him,” Mulpramook wrote.

A nurse at Mount Sinai’s intensive care unit recalled watching patients’ kidneys quickly shut down, adding that many require intravenous drips of the blood thinner Heparin. “It’s insane how sick they get, how quickly,” the nurse said. “We’re really trying hard to figure out how to treat them.”

Doctors say they are having limited success saving patients that require intubation.