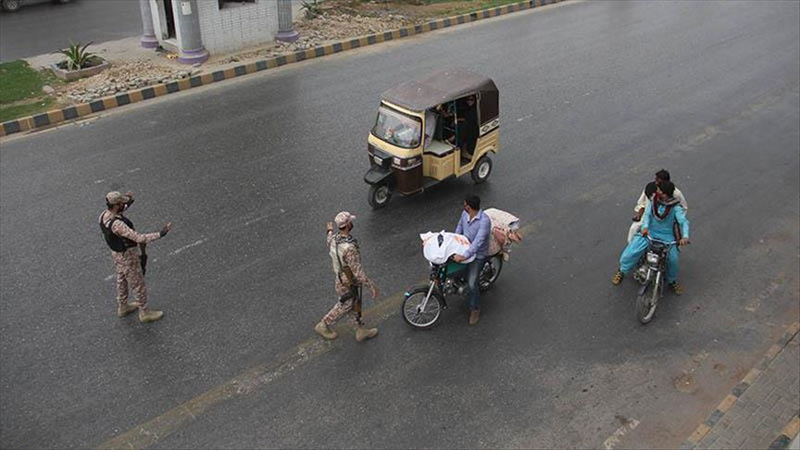 “We cannot afford an indefinite lockdown,” he told a news conference along with Special Assistant to Prime Minister on Information and Broadcasting Dr Firdous Ashiq Awan. “We will have to keep our essential services functioning as well,” he said.

Maj Gen Iftikhar thanked media for reporting objectively on the coronavirus pandemic, saying that he has no hesitation in admitting that the state will require cooperation from the media to battle the virus. He also paid tribute to the doctors, health workers and medical staff who are at the forefront in the battle against the coronavirus. “I pay special tribute to doctors, paramedics, security personnel, on the frontlines of the battle against COVID-19 virus. I also thank ulema for their role,” he said.

The DG ISPR briefed media about the NCOC, saying that it is headed by Federal Minister for Planning, Development and Special Initiatives Asad Umar. He said the NCOC serves as a nerve centre ‘to collate and analyse information received from provinces, after which recommendations are made to National Command Centre so that the country’s top political leadership can take timely decisions’.

He said the NCOC is a ‘one-window operation’ where under one roof, important ministries and provinces have representation. “Here, all sorts of information is received and is forwarded,” he said.

Dr Firdous Ashiq Awan said the nation’s protection and safety from the coronavirus pandemic is the first priority of Prime Minister Imran Khan. She said the NCOC will review the implementation of decisions taken to curb the spread of coronavirus in the country. The NCOC, which was inaugurated by the prime minister as a nerve center earlier in the day, will provide a platform to all the stakeholders to perform their assigned functions smoothly, she added.

Dr Firdous praised Chief of Army Staff General Qamar Javed Bajwa and his team for providing an unprecedented support to the government in the toughest time. The federal and provincial governments, in coordination with all the institutions, are making joint efforts to defeat the unseen enemy, she added.

She said Director General Operations and Planning NCOC Major General Asif Mehmood Goraya briefed the prime minister in detail about the global as well as local situation of the coronavirus pandemic and the national strategy devised with the help of provinces to combat the contagion. He presented a roadmap to the prime minister to address the challenges of economic fallout.

Dr Firdous said focal person on COVID-19 Dr Faisal Sultan presented epidemiology based analysis to the prime minister regarding the coronavirus. He also apprised the PM of the implementation of decisions taken by the federal as well as provincial governments to stop the transmission of deadly virus.

Dr Faisal emphasized that sharing of accurate information and data at grassroots level is need of the hour for national security strategy. The provincial governments must record all positive cases in the central databank to make a comprehensive strategy, she stressed.

She said the prime minister, in his concluding speech, appreciated the efforts of NCOC and directed to create a balance between the ‘lockdown and the hunger’. The PM directed to form a think tank consisting of representatives of ministries of health and finance, and other stakeholders to evaluate and share working plan with the NCOC, she added.

Dr Firdous said the prime minister expressed concern about hoarding and smuggling, and directed the related departments to take stern actions against hoarders whereas the law enforcement agencies must come into action against smugglers with zero tolerance. She said the prime minister also directed the provinces and relevant departments to ensure that there should not be long queues of goods transport vehicles at entry and exit points. The prime minister, she said, tasked the minster for food to take essential steps about wheat cropping in different provinces and collect data on day to day basis to ensure its procurement and supply into the market. She said Prime Minister Imran Khan directed the National Disaster Management Authority chief and Dr Faisal Sultan to devise a strategy by April 15 to meet the challenge. He also called for preparing a roadmap regarding training, capacity building, motivation and counseling of doctors and paramedic staff, directing his health advisor to ensure the implementation of decision to give a one-month additional salary as bonus to them, she added. The SAPM said it was decided in the meeting of NCOC that the ISPR and the Ministry of Information and Broadcasting will jointly provide accurate information based on facts to the media and create a close coordination mechanism.