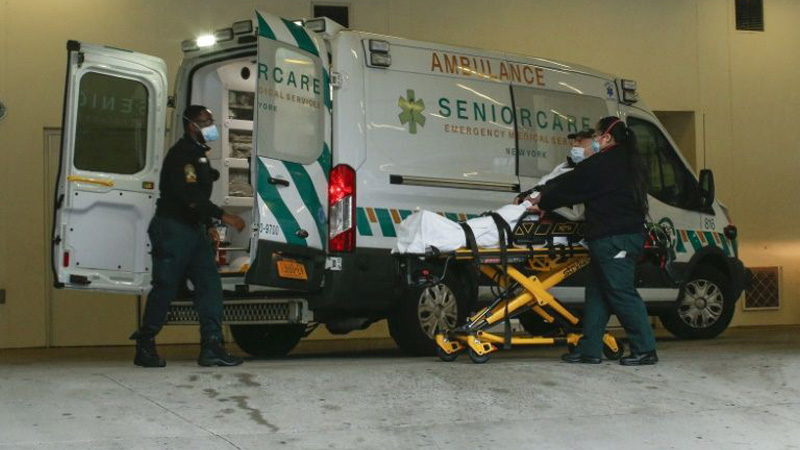 With the rapid rise of hospitalizations and a health system nearly at capacity, New York doctor Shamit Patel is preparing for the worst over the next few days, all while hoping he won’t have to start choosing which coronavirus patients to treat.

Just 10 days ago, only half of the 46-year-old internist’s patients at Beth Israel — one of the Mount Sinai hospitals in Manhattan — were suffering from COVID-19.

Last week 85 to 90 percent of his patients had the disease.

“We’ve stopped seeing the regular patients,” he told AFP via videoconference. “The hospital is full of coronavirus patients.” “We’re not over capacity yet, but we’re planning for it to go over capacity,” he said, adding he thinks the hospital has “planned well.”

The wave of virus patients at Beth Israel corresponds to the one inundating New York City, which shot from 463 confirmed cases two weeks ago to 36,000 on Monday. “At the rate that I’m seeing, the peak could be anywhere from end of this week to sometime next week,” said Patel.

Under extreme pressure for the past two weeks, he is preparing for the worst, even if “it’s something that we hope we don’t have to see.” For Patel, the worst would be a situation similar to that in certain regions of Italy, where the health system is so overwhelmed that it can no longer take care of all patients. “You’re gonna have to be a little quicker in seeing and assessing and getting the treatment plan for each patient,” Patel predicted, noting they “may have to double or triple the number of patients you’re seeing.” But, he added worriedly, “you can’t really go more than triple the number of patients you’re seeing in a day and provide effective treatment.”

In addition to the limitations of healthcare personnel, Patel is worried about a potential shortage of equipment, particularly of ventilators. New York governor Andrew Cuomo and New York City mayor Bill de Blasio talk daily about the need for the machines.

“If you get a surge of patients coming in, and you only have a limited number of ventilators, you can’t necessarily ventilate patients,” Patel said. “And then you have to start picking and choosing.”

Outside of the hospital, Patel is also worried about transmitting the virus to his family. He lives with his 80-year-old father, who suffers from Parkinson’s, and his aunt, who has cancer.

“I don’t want to come back here and actually give it to them because I don’t think they would do well at all,” he said.

He maintains the minimum two meter (six-foot) distance and uses antibacterial wipes generously, while ensuring his relatives have enough food.

“I stay pretty much in my room,” Patel explained, “and then I’ll go out there and periodically check on them.”

But stress and anxiety are ever-present, both at work and at home for Patel and his colleagues, who are running a marathon, as governor Cuomo put it.

“If it’s something that kicks in, then it goes down after it peaks, then we can sustain it for a little while,” Patel said. “But all hands on deck for months on end is something that’s hard to sustain.”

“This is going to be a long and drawn out battle.”