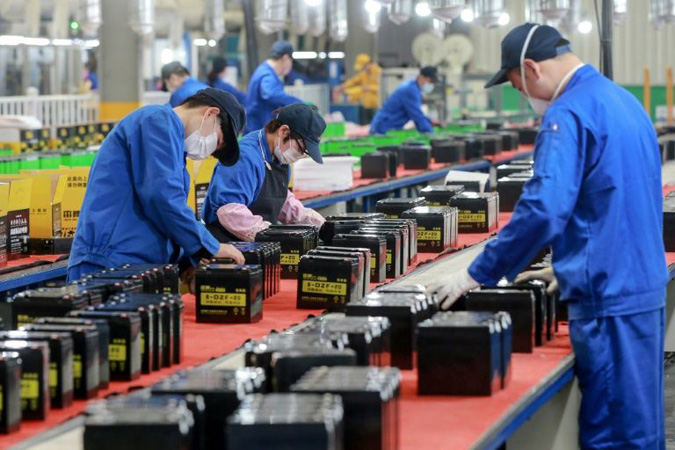 Asian equities enjoyed a strong start to Tuesday following another rally on Wall Street, while oil bounced, with traders welcoming a surprise jump in Chinese factory activity, though analysts cautioned that the road ahead remained rocky for the global economy.

The World Bank also warned that fallout from the coronavirus pandemic could bring China’s growth to a standstill, with even a best-case scenario seeing expansion slow to 2.3 percent from 6.1 percent in 2019.

Trillions of dollars pledged to offset the economic impact of the deadly virus have provided a semblance of stability to world markets, which were initially pummelled by the rapid spread of the disease, which has forced swathes of the planet — and the economy — into lockdown. While the number of infections and deaths continues to rise, observers said traders appear to be getting used to the new normal, with some suggesting the sell-off in stocks may have seen its worst. “Certainly we are seeing bottoming in the equity market,” Jun Bei Liu of Tribeca Investment Partners told Bloomberg TV. But she added it was “very hard to see equities rally away, on the basis that the infections are still getting worse and the employment numbers continue to track lower”.

After another rally on Wall Street, which saw all three main indexes jump more than three percent, Asia picked up the baton.

Tokyo went into the break 0.8 percent better off, while Hong Kong and Taipei added more than one percent. Sydney, which soared seven percent Monday on its best day in history, added another two percent, while Seoul was up a similar amount. Singapore, Manila, Jakarta and Wellington all rose more than two percent, while Shanghai added 0.7 percent.

“Stock market price action suggests that investors are comfortable with the ‘whatever it takes, whatever is necessary’ policymakers’ response so far into a deep economic recession,” said AxiCorp’s Stephen Innes. “At a minimum, the massive monetary and fiscal stimulus gives investors some breathing room with fingers crossed for a health care solution.” He added that market players were now turning their attention to the implementation of government stimulus measures.

“This is positive in its own right as it suggests investors are already getting their shopping list ready for the bounce back when government policy tries to raise GDP,” he said.

Adding to the more positive mood on trading floors was data showing China’s manufacturing sector saw surprise growth in March, having been mauled in February as the country went into lockdown to tackle the virus.

China’s Purchasing Managers’ Index, a key gauge of factory activity, jumped to 52.0 from a record low 35.7 the month before. Anything above 50 is considered growth.

The National Bureau of Statistics said the number “reflects that over half of surveyed companies had improvements in their resumption of work and production from the month before”. But it stressed “it does not represent that our country’s economic operations have returned to normal levels”. And while the news out of Beijing is good, there were warnings of a wave of desperately bad figures to come from around the world and Gorilla Trades strategist Ken Berman said stock markets continued to be hostage to uncertainty. “The Volatility Index (VIX) has been closely tracking the major indices throughout the bounce, and without a meaningful decline in the ‘fear gauge’, the rally remains vulnerable,” he said in a note, adding that US jobs data this week would be more closely watched than usual.

Crude surged — with WTI up more than seven percent — following another battering Monday that saw the commodity hit an 18-year low after major producer Saudi Arabia said it would ramp up exports to a record 10.6 million barrels per day in May. There was some relief after Donald Trump and Russian counterpart Vladimir Putin held talks on the crude crisis, which has been fuelled by the hit to demand by the coronavirus and a price war between Moscow and Riyadh. Innes said Trump’s call may have been an “attempt to get Russia to pull up a chair to the negotiating table with Saudi Arabia, or maybe even (looking at) loosening sanctions on Russia, as desperate times call for drastic solutions”.

He said any sign of Moscow and Riyadh putting aside their differences would be positive but added that the market “is not entirely buying into it”.