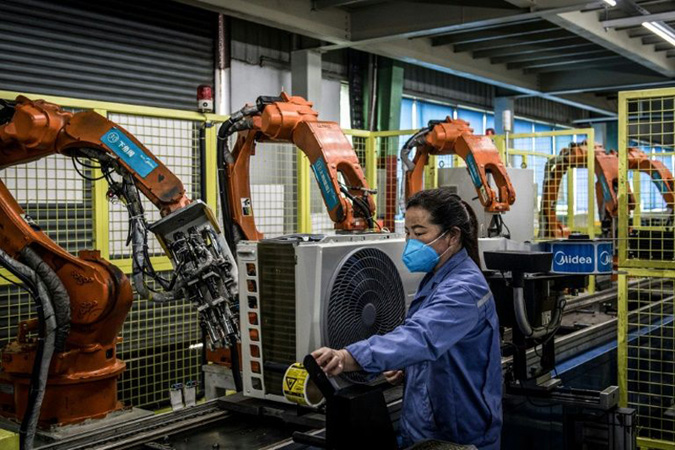 Chinese factory activity saw surprise growth in March as businesses grind back to work following a lengthy shutdown but analysts said the economy faces a challenging recovery as external demand is devastated by coronavirus, while the World Bank warned growth could screech to a halt. China is slowly returning to life after months of tough restrictions aimed at containing the deadly COVID-19, which put millions of people into virtual house arrest and brought economic activity to a near standstill.

The strict measures saw a closely watched gauge of manufacturing plunge to its lowest level on record in February while industrial production contracted for the first time in 30 years as the country essentially shut up shop. But on Tuesday, the Purchasing Managers’ Index (PMI) came in well above expectations, hitting 52.0 for March, according to the National Bureau of Statistics (NBS). That is well above the 35.7 from the month before and beat forecasts of 44.8 in a Bloomberg survey. Anything above 50 is considered expansion.

The NBS said the number “reflects that over half of surveyed companies had improvements in their resumption of work and production from the month before”. However it added that “it does not represent that our country’s economic operations have returned to normal levels”. Non-manufacturing PMI came in at 52.3, also well above analyst predictions.

NBS senior statistician Zhao Qinghe said despite the rebound in the manufacturing PMI “there remains relatively large pressure on enterprises’ production and operations”. A larger proportion of firms face tight funding and insufficient market demand this month, Zhao added, with “new severe challenges” ahead as the virus sweeps the planet, dragging down trade growth. Analysts expect the PMI to fall back into contraction territory next month.

The World Bank cautioned Tuesday that the global economic fallout could see China’s economic growth slump to 2.3 percent this year, from 6.1 percent in 2019.

Meanwhile, an official at China’s central bank told media he recommends that Beijing should not set an economic growth target this year given the huge uncertainties it faces. Ma Jun, a member of the People’s Bank of China’s monetary policy committee, said it would be hard to hit a six percent growth target given the virus impact, adding that setting a goal could also limit the country’s policy response, reported the Economic Daily state media outlet.

Tommy Xie, head of Greater China Research at OCBC Bank, warned: “We shouldn’t read too much into this sharp rebound.

“February was really a bad month for China… (Manufacturers) had a huge supply disruption because of shutdowns of factories and movement controls,” Xie told AFP. “Any recovery from February… was kind of a done deal.”

China is likely to see the impact of a “demand shock” in April, which could be a more significant indicator, he added, as global demand dwindles and factories abroad suspend operations.

“I think people have already forgotten… that even if the coronavirus subsides in the US, there could be a high chance the technology war and trade war return,” said Pang, referring to lingering trade tensions between China and the US. The last time China’s PMI hovered above the 52.0 mark was in September 2017, before the trade war kicked in.

How long the weakness persists this time will depend on how quickly countries recover from the virus pandemic as well, said the economists. Analysts have also cautioned that other economic data in March may be less rosy. Nomura analysts Lu Ting, Wang Lisheng and Wang Jing said in a note ahead of the PMI data release that they expect “deeply negative growth for almost all activity data in March”, given the relatively slow business resumption rate and slump in external demand.

The pandemic has now left more than a third of the world’s population confined to their homes, with economists predicting the most violent recession in recent history to follow.