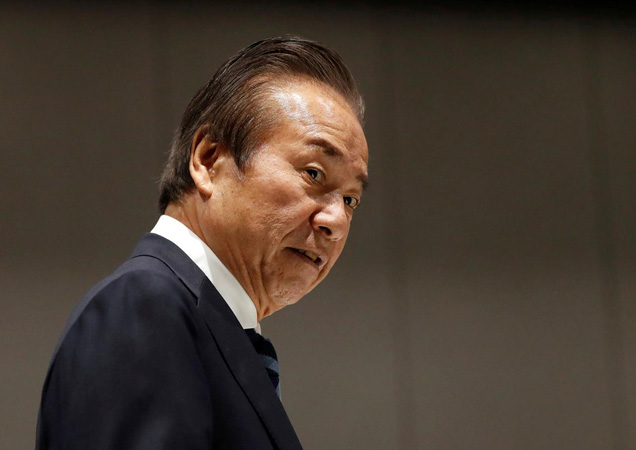 A businessman who received millions of dollars for his work on Tokyo’s successful campaign to host the 2020 Olympics, which was postponed last week due to the coronavirus, said he played a key role in securing the support of a former Olympics powerbroker suspected by French prosecutors of taking bribes to help Japan’s bid. Haruyuki Takahashi, a former executive at the advertising agency Dentsu Inc, was paid $8.2 million (£6.66 million) by the committee that spearheaded Tokyo’s bid for the 2020 Games, according to financial records reviewed by Reuters. Takahashi told Reuters his work included lobbying International Olympic Committee members like Lamine Diack, the ex-Olympics powerbroker, and that he gave Diack gifts, including digital cameras and a Seiko watch.

“They’re cheap,” he said. The payments made Takahashi the single largest recipient of money from the Tokyo bid committee, which was mostly funded by Japanese companies. After his involvement in Tokyo’s successful campaign, Takahashi was named to the board of the Tokyo 2020 organizing committee, a group tasked with running the summer Games after it was awarded to Japan. Takahashi acknowledged receiving the payments but declined to give a full accounting of how he used the money. He said he urged Diack to support the Tokyo bid and denied any impropriety in those dealings. He said it was normal to provide gifts as a way of currying good relations with important officials like Diack. He said there was nothing improper with the payments he received or with the way he used the money. “You don’t go empty-handed. That’s common sense,” Takahashi told Reuters, referring to the gifts he gave Diack. Banking records from the Tokyo 2020 bid committee show it paid around $46,500 to Seiko Watch. A senior official at the bid said “good” watches were handed out at parties organized as part of Tokyo’s campaign to win the Olympics, although he did not specify the brand. International Olympic Committee (IOC) regulations allowed for the giving of gifts of nominal value at the time of the 2020 bid, but didn’t stipulate a specific amount. A day before the 2013 vote on the host city, Diack informed a meeting of African Olympic representatives that he planned to support Tokyo on merit, a lawyer for the influential Senegalese sports figure told Reuters. But he didn’t instruct anyone how to vote, the lawyer said.

The Tokyo bid committee also paid $1.3 million to a little-known non-profit institute run by former Japanese Prime Minister Yoshiro Mori, a powerful figure in Japanese sports and the head of the Tokyo Olympics organizing committee. The payments to Takahashi’s company and Mori’s non-profit are enumerated in banking records from the Tokyo 2020 bid committee examined by Reuters. The payments were first reported by Japanese magazine Facta. French investigators have not questioned anyone about the payments to the Japanese recipients. The banking records were provided to French prosecutors by Japan’s government as part of France’s investigation into whether Tokyo’s bid committee paid $2.3 million through a Singaporean consultant to win Diack’s support for Japan to host the 2020 Games. Diack, 86, has consistently denied any wrongdoing. His lawyer said Diack “denies all allegations of bribery.”

The French are also investigating Diack’s son, Papa Massata Diack, on suspicion that he received the bulk of the money paid to the Singaporean consultant, and passed money on to his father to secure votes for Tokyo. Diack’s son has also denied any wrongdoing and said via email that he would “deliver my version in courts!!!” Mori did not respond to questions. A representative of Mori’s non-profit said the entity was paid by the bid committee to “mainly analyze international information.”

Nobumoto Higuchi, the secretary general of the bid committee, said Takahashi earned commissions on the corporate sponsorships he collected for the bid. “Takahashi has connections,” Higuchi said. “We needed someone who understands the business world.” The International Olympic Committee said it would not have been made aware of payments between private parties or gifts given to IOC members.

French investigation: Olympic preparations have cost Japanese taxpayers some $13 billion, and the delay of the Games has rattled corporate sponsors, who had paid a record $3 billion to be affiliated with the Olympics as of June last year. Mori and Takahashi were central to Tokyo’s bid to win the Olympics, a campaign that began in 2011 and became a national priority under Prime Minister Shinzo Abe. Mori has publicly recounted how he lobbied a key International Olympic Committee official ahead of the vote. Since 2015, French prosecutors have been investigating Diack, formerly the head of the international body governing track and field. Diack has also been accused of taking a separate $2 million bribe to corral votes for Rio de Janeiro in that city’s successful bid to hold the Olympics in 2016. He has been under house arrest in France since charges of corruption linked to sports doping – when he headed the International Association of Athletics Federations – were brought against him in 2015. Diack’s lawyer said his client “did not receive any money from anyone relating to the Olympic Games in Tokyo or Rio de Janeiro.”

Tsunekazu Takeda, who headed Tokyo’s bid committee, is also under investigation by the French on suspicion of authorizing the payments from the bid committee to the Singaporean consultant that investigators suspect acted as an intermediary to get money to Diack. Takeda resigned from both the Japanese Olympic Committee and the International Olympic Committee last year and has denied wrongdoing, saying he believed the payments were for legitimate lobbying efforts.

A 2016 investigation into the payments made by the Tokyo bid committee, which was conducted by a third-party panel convened by the Japanese Olympic Committee (JOC), found no evidence of wrongdoing. The JOC probe was criticized by an outside group of legal and compliance experts for not being thorough enough. The report that resulted from the JOC probe did not examine payments to Takahashi or the Jigoro Kano Memorial International Sport Institute, the non-profit sports institute run by Mori. The JOC said it was separate from the bid committee and had no knowledge of payments made to Takahashi’s company and Mori’s non-profit. In a series of interviews, Takahashi, 75, described how he became involved in the Tokyo bid. He said he was brought on as a consultant by bid-committee chief Takeda. Takahashi said one of his main assets was the connections he had built to Diack and other powerful figures in international sports during a career developing Dentsu’s sports marketing business. Takahashi said he was paid through his company, Commons Inc, by the Tokyo bid committee for “wining and dining” people who could further Tokyo’s bid, and for marketing and other activities related to Tokyo’s Olympic campaign. The payments were in part “a commission fee” for his role in gathering sponsors to fund Tokyo’s bid, he said. “I didn’t pay any money to anybody. This is my profit.”