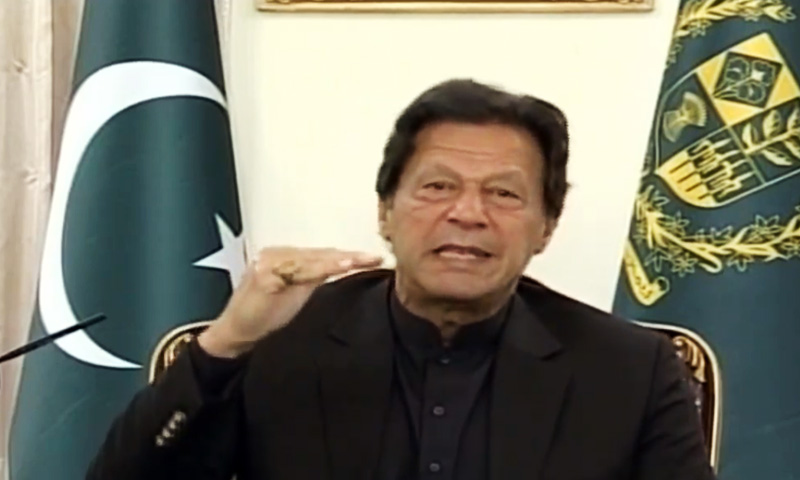 Stressing on the need to fight war against coronavirus with unity and sagacity, Prime Minister Imran Khan on Monday announced to set up ‘PM’s Relief Fund for COVID-19’ and a youth force to effectively tackle the situation arising out of the deadly contagion which has so far killed over 30,000 people across the world.

Addressing the nation over radio and television, he urged people including the overseas Pakistanis to contribute generously to the relief fund. He said those contributing to the fund will not be asked any questions about the source of their funds, rather they will be given tax incentives. He said the money raised through this fund will be used for giving financial assistance to the poor people hit by coronavirus through Ehsas Programme. The prime minister also announced setting up the ‘Corona Tiger Force’ to help government and institutions reach out to the poor people affected by the lockdown and provide them with food and other essential items. “God forbid, if coronavirus spreads, this youth force in coordination with army and administration will reach out to the poor people,” he said, and added that this force, besides supplying food and other essential items to the poor, will also help create awareness among people about self-quarantine and other safety measures.

The prime minister said the youth from all segments of society including young doctors, nurses and others can join the Corona Tiger Force. The whole operation of the force will be organized and coordinated by a data cell at the PM Office.

He said the State Bank of Pakistan has decided to offer soft loans to those industries and factories who will not lay off their employees and labourers in this situation. He said the philanthropists engaged in the charity work in the wake of coronavirus should get themselves registered at Ehsas programme, so that a coordinated effort could be made without any duplication and neglecting any segment.

Prime Minister Imran that the whole world is fighting the war against the coronavirus but China has emerged as the most successful country in containing the pandemic. He said that China had locked down Wuhan to contain the virus. “Had Pakistan’s situation been similar to China’s, I would have ordered a lockdown in our cities as well,” he said.

The prime minister said that 25% of Pakistan’s population are the poor who cannot afford even two meals a day. He said that if the government was unable to look after the unemployed, then the lockdown will not be successful. “This disease does not differentiate between the poor and the rich,” he said, citing the example of British Prime Minister Boris Johnson who contracted the infection as well.

The prime minister said that merely resources are not enough to win the war against the pandemic. “India decided to impose a countrywide lockdown. Today, their prime minister issued an apology to the nation for ordering a lockdown without proper planning,” he added.

The prime minister said that when people hoard products, their prices increase and as a result, the poor are left out. He warned people against increasing prices artificially to earn profit. “Those who want to make money from the hunger of the poor, the state will take strict action against you. The state will make an example out of you,” he added.

He cited the example of the Ansar and Muhajireen from Islamic history and urged masses to unite to “defeat hoarders and create the spirit that will win the war against the coronavirus.”

Imran Khan also urged the people to demonstrate responsibility by practicing social distancing. “Remember, if you are not careful, you are putting the lives of others in danger as well as your own,” he said.