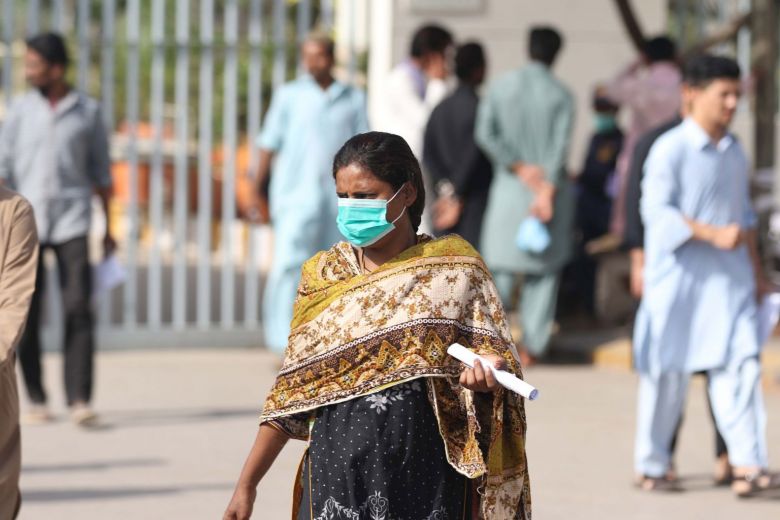 Pakistan’s tally of confirmed coronavirus cases neared 1,542 on Sunday, with 15 people have died from the disease so far.

Punjab has the most number of cases out of all provinces, with numbers reaching 557 on Saturday, of which 207 were confirmed in Dera Ghazi Khan, four in Mandi Bahauddin, 75 in Multan, one in Narowal, 119 in Lahore, one in Rahim Yar Khan, 51 in Gujrat, two in Sargodha, 10 in Gujranwala, one in Attock, 19 in Jhelum, one in Bahawalnagar, 15 in Rawalpindi, two in Mianwali, nine in Faisalabad, two in Nankana Sahib and one in Khushab.

A doctor working in the District Headquarters Hospital Rawalpindi was tested positive for Covid-19, Deputy Commissioner Capt (r) Anwarul Haq has confirmed. He added that the doctor is being kept in the isolation ward of the hospital.

Twelve new cases were reported in Islamabad on Saturday.

Adviser to the Khyber Pakhtunkhwa Chief Minister on Information Ajmal Wazir has confirmed the fourth death from coronavirus in the province. The deceased woman belonged to the Lower Dir area and had recently returned from Umrah. Her village has been put under quarantine.

Hyderabad police has, meanwhile, sealed the headquarters of the Tableeghi Jamaat in the city after one of its members tested positive for the coronavirus. SSP Hyderabad Adeel Chandio confirmed that the mosque where the headquarters is located has been placed under quarantine and that no one is allowed to come out as a precautionary measure to stop the spread of Covid-19.

Sindh Chief Minister Murad Ali Shah Saturday noted that 25 per cent of the total coronavirus cases detected in Sindh are cases of local transmission. “The local transmission ratio is worrisome and needs to be contained further,” he said during a meeting of the provincial taskforce on Covid-19. He directed the provincial health department to establish 14 Critical Care Units across Sindh, including one in Karachi. He said the facilities must be equipped with ventilators, monitors, pulse oximeter, suction machines, defibrillator and compressors.

As the lockdown enters its second week in Sindh, it’s important to remember that the provincial government has barred employers from laying off employees and bound them to pay workers their full salaries during the closure. A notification issued by the government has directed employers to consider the period of lockdown as paid leave for employees.

Police in Karachi on Saturday registered 88 first information reports (FIRs) and detained at least 38 prayer leaders and mosque staff members across the city for violating the Sindh government’s restrictions on congregational prayers. The FIRs were registered under Sections 186 (obstructing public servant in discharge of public functions), 188 (omission to assist public servant when bound by law to give assistance) and 269 (negligent act likely to spread infection of disease dangerous to life) of the Pakistan Penal Code and Section 4 of the Sindh Epidemic Disease Act, 2014.

Four prayer leaders were also arrested by law enforcement agencies and police on violation of Friday prayers code at Gakhar Mandi. The Punjab government had directed all the mosques to be locked for Friday prayers and congregational prayers except only for five people, including the caller for prayer (muezzin) and prayer leader (imam), who would be allowed to perform prayers.

Meanwhile, a contingent of seven buses carrying 204 pilgrims, who had been under quarantine at the Taftan border, Saturday left to take the pilgrims back to their homes. Of the 204 pilgrims, 77 are from Balochistan, 63 from Punjab, 59 from Sindh and 5 from Khyber Pakhtunkhwa.

On the international front, Saudi Arabia reported 99 new coronavirus cases in the last 24 hours, reported Saudi Gazette, while the number of virus-related deaths rose in the Kingdom rose to four.

The total number of cases in Saudi Arabia is 1,203.

Out of the 99 new cases, 10 are related to travel and were quarantined upon their arrival, while 89 cases are of individuals who had direct contact with previously infected people.

Around 1,704 new cases of coronavirus were confirmed in Turkey in the last 24 hours, while 16 more people died, Health Minister Fahrettin Koca said Saturday. The country’s total caseload of COVID-19 reached 7,402 and the death toll now stands at 108, the minister said. At least 7,641 tests have been conducted in the last 24 hours, Koca said.