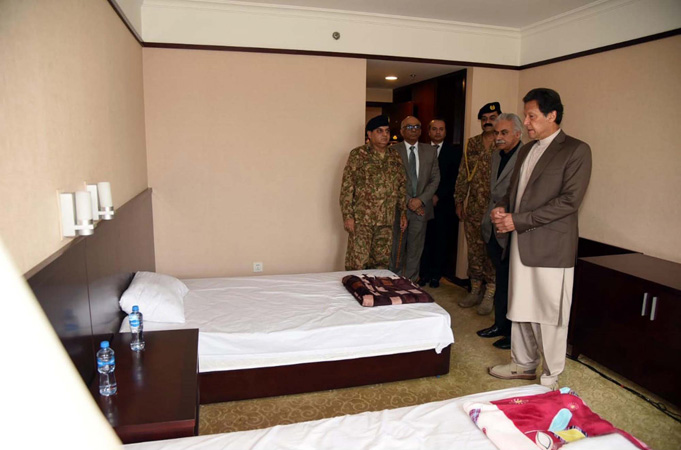 Prime Minister Imran Khan Thursday broke ground for the construction of a 250-bed Isolation Hospital and Infectious Disease Centre in the federal capital.

The isolation hospital will be constructed by the Frontier Works Organization near National Institute of Health over 40 kanals of land using the pre-fabricated light-gauge steel structure. The hospital is expected to complete by May 10 this year. The Chinese government will fund the construction of the facility which has already extended the assistance of $4 million.

The project consists of seven patients blocks – four male and three female – a laboratory and diagnostics block and another for accommodation of doctors and paramedics. It will be developed as fully air-tight facility with all doors to be operated through sensors to avoid any human contact.

Speaking on the occasion, the NDMA chairman apprised the prime minister about the logistics arrangements being made to cope with the growing needs of the medical equipment across the country including the ventilators, PCR equipment, masks and others.

The city administration has already started disinfection operation in Islamabad, starting from PIMS hospital, Bara Kahu, Fruit and Vegetable Market and other areas. Two localities of Bhara Kahu and Shahzad Town of Islamabad have been sealed where multiple number of Covid-19 patients have been detected.

Meanwhile, Prime Minister Imran Khan has said that protection of homeless people is responsibility of the state and the government is committed to provide food and health facilities to them at shelter homes.

The prime minister was talking to focal person for shelter homes Nasim ur Rehman, who called on him at the PM Office.