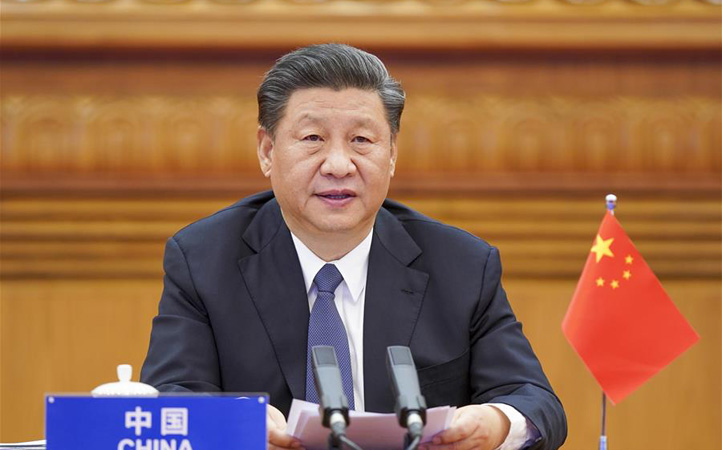 Chinese President Xi Jinping Thursday called for a resolute all-out global war against the COVID-19 outbreak as leaders of the Group of 20 (G20) convened an extraordinary summit to coordinate multilateral response to the pandemic.

The summit came as the global death toll from the COVID-19, an illness caused by novel coronavirus, has climbed over 21,000 and the number of infections has surpassed 480,000 as of Thursday, according to a count by Johns Hopkins University.

This is the first time for the leaders of the world’s 20 major economies to hold a summit online since the mechanism, which used to only gather finance ministers and central bankers, was elevated to be the world’s premier platform for international economic cooperation in 2008.

Stressing the outbreak is spreading worldwide and the situation is disturbing and unsettling, Xi called on countries to move swiftly to stem the spread of the virus. He proposed that a G20 health ministers’ meeting be convened as quick as possible to improve information sharing, strengthen cooperation on drugs, vaccines and epidemic control, and cut off cross-border infections. He also proposed a G20 COVID-19 assistance initiative for better information sharing and policy and action coordination with the support of the World Health Organization (WHO). Guided by the vision of building a community with a shared future for mankind, China will be more than ready to share its good practices and provide assistance in its capacity to countries hit by the growing outbreak, he said.

Xi called on countries to make a collective response for control and treatment at the international level. China has set up its online COVID-19 knowledge center that is open to all countries, he said, adding that it is imperative that countries pool their strengths and speed up research and development of drugs, vaccines and testing capabilities in the hope to achieve early breakthrough to the benefit of all.

The summit was chaired by Saudi Arabia’s King Salman bin Abdulaziz Al Saud. The kingdom, which holds the presidency of the G20 this year, said it organized the extraordinary meeting to advance global efforts to tackle the pandemic and its economic implications. The leaders of G20 members were joined by their counterparts from some invited countries, including Spain, Jordan, Singapore and Switzerland, as well as the United Nations, the World Bank and other international organizations, and the chairing states of some regional organizations.

At the summit, G20 nations pledged a ‘united front’ in the fight against coronavirus, saying they are injecting $5 trillion into the global economy to counter the pandemic amid forecasts of a deep recession.

US President Donald Trump and Russian President Vladimir Putin also joined the emergency videoconference. The talks come amid criticism that the G20 has been slow to address the COVID-19 pandemic, which has left more than 21,000 dead worldwide and triggered financial shock waves as more than three billion people are locked down. “We are strongly committed to presenting a united front against this common threat,” the leaders said in a joint statement after the summit. “We are injecting over $5 trillion into the global economy, as part of targeted fiscal policy, economic measures, and guarantee schemes to counteract the social, economic and financial impacts of the pandemic.”

The figure was a sum total of the fiscal stimulus packages adopted by individual G20 states, the Chinese foreign ministry said, adding that Beijing’s share amounted to $344 billion.

As concerns mount for poorer countries without access to capital markets or adequate health facilities, G20 leaders also pledged to work with bodies such as the International Monetary Fund to deploy a ‘robust’ financial package to support developing nations. “It is our responsibility to extend a helping hand to developing countries and (the) least developed countries,” King Salman said.

Putin called for a ‘moratorium’ on sanctions during the pandemic, telling G20 leaders it was a matter ‘of life and death’. He did not specify which countries should be earmarked for sanctions relief.

The world’s 20 most industrialised countries are scrambling to defend their virus-wracked economies amid forecasts they will likely plunge into a recession. On Wednesday, the financial ratings agency Moody’s estimated the G20’s overall gross domestic product would contract by 0.5 percent this year, with the US economy shrinking by 2.0 percent and the eurozone by 2.2 percent.

“The G20 declaration on the Covid-19 pandemic is a document of global resolve,” said Markus Engels, from the Global Solutions Initiative, a network of think tanks. “The lesson the G20 leaders take away from their meeting should be that social and international solidarity must once again be acknowledged as the most important instrument for combating the crisis.”