Abbreviated as PKM Global, the initiative is an extension of Police Khidmat Markaz, an ICT intervention of the Punjab Police to reform and further enhance police public services. With six major services, including National Status Verification provided within only 32 days, QR Coded globally verifiable certificates and verification documents, PKM Global is an attempt to cater to the Pakistani diaspora in developed and developing nations alike.

PITB, recognised for painting the ICT canvas of Punjab, has played an important role in enhancing public facilitation services through ICT interventions and bridging the communication gap between the government departments and the masses. IT initiatives such as e-Pay Punjab is a noteworthy example that, since its launch in October 2019, has ensured transparency in tax related transactions for 13 kind of taxes/levies and five departments. Similarly, initiatives implemented in the fields of health and education have not only made life easier for citizens but also increased transparency and accountability. PITB’s successful association with Punjab Police has led to a range of citizen centric initiatives from Crime Mapping to Hotel Eye and digitization of police stations. PKM Global successfully builds on the great legacy of citizen facilitation by extending the scope of services available for locals to overseas Pakistanis.

Police Khidmat Markaz (PKM), launched prior to PKM Global, is currently offering fourteen services under the umbrella of Punjab Police with an overall estimate of 4.02 million people served to date. Under this PITB powered flagship venture, PKM is offering the following services with guaranteed turnaround times:

Footprint of PKM is widespread across 36 districts of Punjab with 71 PKM desks, 36 Mobile PKM and119 PKC (Police Khidmat Counter) available 24/7. After successfully reaching this milestone, through PKM Global, Punjab Police working in close association with Ministry of Foreign Affairs and the Ministry of Interiors aims at reaching out to a population of about 8.8 million overseas Pakistanis with 27 countries on list to begin with.

Given the fact that overseas Pakistanis, including dual nationals, require assistance of police and public service departments every now and then, PKM Global would go a long way in helping overseas Pakistanis. Typically, Pakistani expats wishing to avail these police services, often fell prey to corrupt practices, delays and a host of other challenges in acquiring police related documents. They also had no visibility of application status besides undefined turnaround times.

Enabling and equipping the embassies of host countries in Pakistan with a reliable system, the ICT assistance by PITB also involves trainings for embassy representatives and monitoring the system on regular basis. QR Coded, PKM Global is restructuring the entire mechanism as follows: 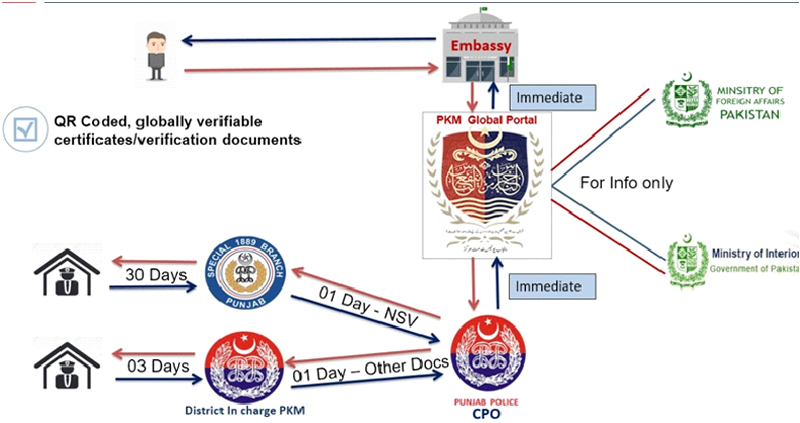 Pakistan has the 6th largest diaspora in the world. Overseas Pakistanis are widely present in at least 35 countries world over with Saudi Arabia, UK, UAE, USA, France and Canada in the lead respectively. During the present political regime, a significant demographic of overseas Pakistanis have come forward to contribute towards progress and stable future of Pakistan with Saudi Arabia as the largest source of remittances. As of December 2019, remittances flow to Pakistan touched a seven-month high at $2.09 billion. The importance of overseas Pakistanis, therefore, can hardly be exaggerated.

The present government is fully committed to Pakistanis both inside and outside the country and realizes the critical role of remittances in shaping Pakistan’s economy. PKM Global is yet another step towards strengthening government’s ties with Pakistani expats that promises to foster much needed fraternity.