Battle against deforestation by Pakistan Navy 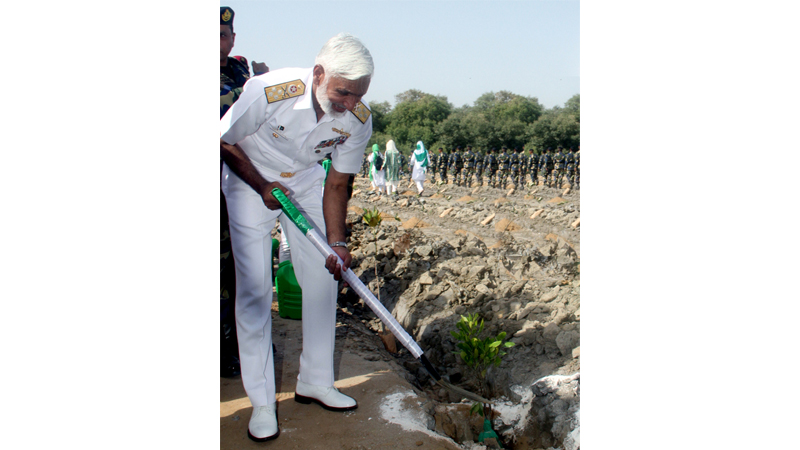 Plants play a pinnacle role in many of the Earth’s ecosystems so their presence is important to ensure wildlife and ecosystem health.

Despite the many benefits that plants provide, one of the environmental issues we face is environmental degradation. The Earth’s ecosystems are subject to deforestation, development and resource extraction. Because of the many ways plants help humans and the environment, ecosystems and plants need to be protected. During this time of environmental uncertainty, it’s important that we don’t take their presence for granted.

Pakistan Navy has taken initiative and contributed towards clean and green Pakistan and will plant 1.41 Brachychiton and 03 million Mangroves countrywide.

The genus Brachychiton is in family Malvaceae in the major group Angiosperms (flowering plants). They grow to 4 – 30m tall, and some are dry-season deciduous.

Several species are pachycaul plants with a very stout stem for their overall size, used to store water during periods of drought. The leaves show intraspecific variation and generally range from entire to deeply palmately lobed with long slender leaflet-like lobes joined only right at the base. Their sizes range from 4 – 20 cm long and wide. Native populations on agricultural land are often retained to provide dense shade and drought fodder. Leaves lopped from branches are nutritious and desirable to stock, however consumption of the fruit may cause illness. The deep rooting trees have minimal impacts on cropping and also support honey production. Ground-up seeds can be brewed into a coffee substitute or added to bread. The swollen, carrot-like taproot is a nutritious and agreeable vegetable and the gum exudate is also edible. Kurrajong fibre taken from the stem has been used in twine and netting manufacture. While sapling growth is often very slow, great improvements are possible through soil cultivation, watering and care. Plants have numerous pests and diseases but show resilience to defoliation. Internal infections are best avoided by application of anti-fungal treatments to open wounds. Brachychiton species in cultivation include Brachychiton populneus, B. acerifoliu (Flame Tree), B. discolor (Lacebark), B. rupestris (Bottle Tree) and B. gregorii (Desert Kurrajong) etc.

Pakistan is fortunate with rich and varied natural reserves, mangrove ecosystem is one of them. Mangroves forests of Pakistan in Indus delta and along Arabian Sea coastal areas of Sindh and Balochistan. The mangrove swamps of the Sindh coastal zone are extensive, covering 243,000 hectares (ha) compared with 7,400 ha along the Balochistan coast. At times, over 600,000 hectares of Pakistan’s coastline was under mangrove forestation. But today, as per estimates, mangroves are 129,000 hectors in the Indus delta, and over 3,000 hectors in Miani Hor, Kalmat Khor and Gwadar bay areas; probably the tenth largest in the world. Mangroves protect shorelines from damaging storm and hurricane winds, waves, and floods. Mangroves also help prevent erosion by stabilizing sediments with their tangled root systems. They maintain water quality and clarity, filtering pollutants and trapping sediments originating from land.

Mangroves cover an area around 600,000 hectares in Sindh. These forests consist of four mangrove species which include Avicennia marina, Rhizopora mucronata, Ceriops tagal and Aegiceras corniculatum. The most abundant species is Avicennia marina which constitutes up to 90% of the total mangrove population in the province.

The main rationale of mangrove restoration in Indus Delta and along Baluchistan coastal line by Pakistan Navy is to maintain a contribution to national economy. The Pakistan Navy has also undertaken similar campaigns in the past. The mission of these campaigns is to rejuvenate the mangroves ecosystem of Pakistan through mangroves forestation and awareness campaigns for the protection of the environment and for boosting economic sustenance and growth of Pakistan. The Pakistan Navy, besides its role of safeguarding maritime frontiers, pledges its full support in environmental sustainability and conducts beach/ harbour cleaning and mangroves plantations campaigns ranging from Margalla Hills in the North to the coastline in the South, on a regular basis.

To contribute to the healthy environment and in line with the Government’s initiative of ‘Plant for Pakistan’, Pakistan Navy has planted four million mangroves in the coastal belt and 700,000 trees in PN Units/ setups spread across Pakistan in the last three years. In continuation to the same, The Chief of Naval Staff formally commenced the Spring Tree Plantation Campaign 2020 in Pakistan Navy. During this campaign, all units of Pakistan Navy shall plant thousands of saplings as our contribution towards ‘Greener Pakistan’.