Six-wheeled suspension skateboard is made to carve 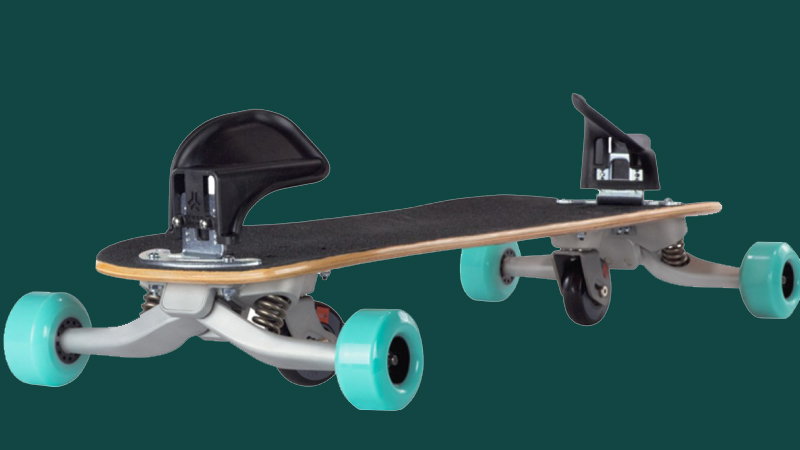 Although several groups have developed skateboards that “carve” like snowboards, Freebord was among the first. The San Francisco-based company’s new 5-X takes things further, with independent suspension for four of the six wheels.

Yeah, that’s right – whereas most skateboards have four wheels, the Freebord 5-X has six. There are the usual two sets of polyurethane wheels in the front and back, along with two center-line-mounted swivelling caster wheels located behind and in front of those, respectively.

Because the casters stick down a little farther, they’re what’s mainly in contact with the road while travelling in a straight line. When turning to either side, however, the two outer wheels on that side also make contact.

This setup allows riders to carve into turns by applying weight to the inside edge of the board, just like they would on a snowboard. On the other hand, by shifting their weight back towards the base, they’re able to slide sideways. In this way, it’s possible to execute tricks such as 180’s and 360’s. The unsuccessfully-Kickstarted Leif electric skateboard utilized much the same strategy.

While Freebord’s original boards featured rigid trucks on the non-caster wheels, the 5-X incorporates spring-suspended hanger arms. These let each wheel move up and down independently, in response to either road bumps or weight being applied from above.

As a result, the ride is not only smoother, but the turning radius is also tighter, making for better carving. Users can swap in springs of different stiffnesses, depending on how much plushness and/or responsiveness they desire. Simple snowboard-like bindings keep the rider’s feet in place on the deck.

Should you be interested, the Freebord 5-X is presently the subject of an Indiegogo campaign. A pledge of US$276 will get you one, when and if they reach production.