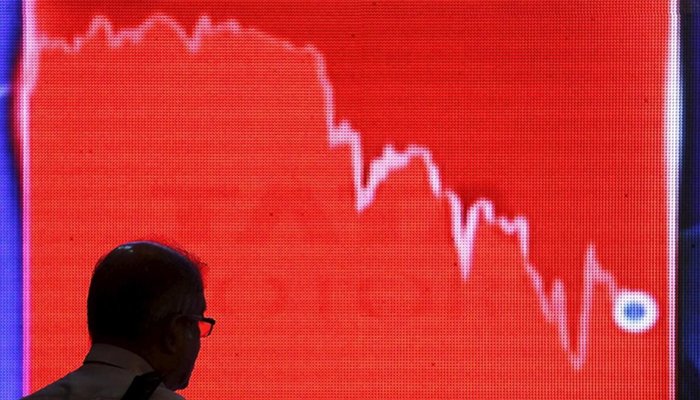 LONDON: Panic over the spread of coronavirus has stock markets around the world on Friday, paving way for the worst week since the 2008 financial crisis and equities on course for the largest weekly drop.

International oil prices tanked significantly amid fears that the coronavirus could devastate the world economy.

Frankfurt headed the losses in Europe, diving more than 5% at one point in the morning deals. Leading European stock markets have tumbled around 12% in just a week, while London’s FTSE 100 is back at levels seen in late 2018.

“Stock markets are well on their way to their worst week since the global financial crisis,” said Craig Erlam, a senior market analyst at Oanda trading group.

Stock markets in Shanghai, Sydney, and Tokyo all closed down 3%, while Jakarta shed more than 4%.

On Wall Street, the Dow on Thursday suffered its biggest points loss on record, shedding almost 1,200 points, while its 4.4% drop marked the worst performance in two years.

The S&P 500 and Nasdaq also slid more than 4%, while the VIX “fear” index is now at its highest level since the European debt crisis erupted in 2011.

“The panic mode is full on,” said Ipek Ozkardeskaya, a senior analyst at Swissquote Bank.

“The coronavirus outbreak has certainly hit businesses, and it might have a longer-than-expected negative impact on company earnings and global growth,” she added.

Elsewhere Friday, the Japanese yen continue to benefit from its status as a haven investment in times of economic unrest, making solid gains against the dollar.

Concern that global crude demand will crash meanwhile sent oil prices to their lowest levels in more than one year after diving more than 4%.

Investors were meanwhile keeping an eye on central banks, particularly the US Federal Reserve, in the hope of monetary easing measures, while governments are faced pressure to provide support.

“However, beyond helping to alleviate the current stock market collapse, there is little any central bank could do to alleviate the potential repercussions of a global pandemic,” noted Joshua Mahony, a senior market analyst at IG.

Indeed, Bank of England governor Mark Carney on Friday told Sky News that at this early stage it was “hard to be precise about the magnitude” of the virus and its economic impact.

“We would expect world growth would be lower than it otherwise would be,” he concluded.

The virus has proliferated around the globe over the past week, emerging in every continent except Antarctica, and prompting many governments and businesses to try to stop people travelling or gathering in crowded places.

The Geneva International Motor Show was the latest major event to be cancelled Friday after Switzerland banned large gatherings.

The virus has killed more than 2,800 people and infected more than 83,000 worldwide — the vast majority in China — since it emerged apparently from an animal market in a central Chinese city in late December.

On Friday, Nigeria reported the first new coronavirus case in sub-Saharan Africa, as the World Health Organization (WHO) warned against the “fatal mistake” of complacency.