An invitation card to a Muslim wedding in Meerut broke the internet as it featured a photograph of Hindu god Ganesh and Radha-Krishna and also says “Chand Mubarak” alongside. 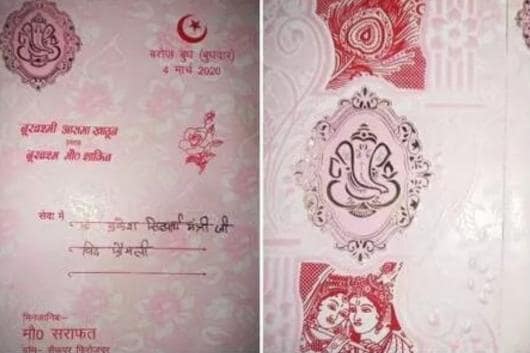 This unique card was printed by Muhammad Sharafat in Hastinapur area for his daughter Asma Khatoon’s wedding on March 4.

“I thought it would be a good idea to showcase the Hindu-Muslim amity, especially when communal hatred is gaining ground. My friends have reacted very positively to the initiative,” said Sharafat.

However, for his relatives and Muslim friends, he has printed another wedding card in Urdu.

“Many of my relatives cannot read Hindi and for them I have printed cards in Urdu as well,” he added.

Being human is the greatest form of religion and thankfully some humans haven’t forgotten the same amidst tough times.