It is time for our industry to adapt to the OTT age: Amar 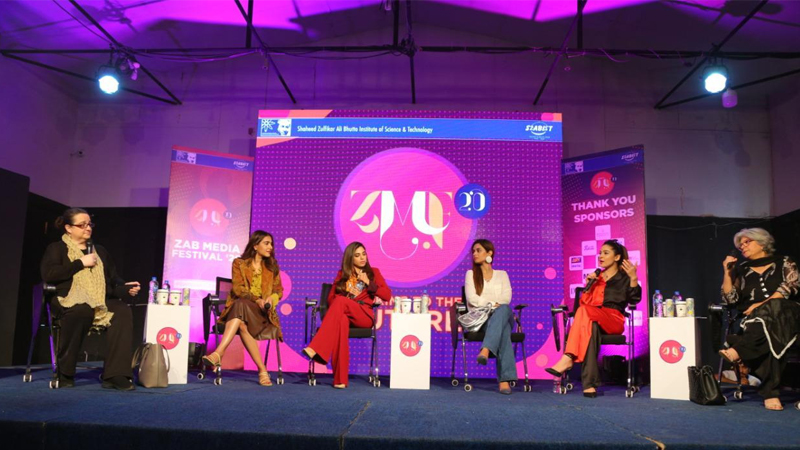 On the second day, we saw ‘Act In Actress,’ a discussion among female celebrities like Marina Khan, Ayesha Omar, Amar Khan, Mansha Pasha, and Sonya Hussyn, being moderated by journalist Fifi Haroon. These critically acclaimed actresses talked about the work culture in the industry, changing the narratives of stories, and presented an overall perspective of being a woman working in the industry. The discussion took place in front of an eager audience of Szabist’s film school students.

Actress Amar Khan, who is all set to make her film debut with ‘Dum Mastam’ later in the year, discussed how junior artists and on-set crew needs to be protected more.

“I am doing my first feature film. Onset, I am the only girl amongst 60 men. We have travelled across Pakistan and I have felt safest on set. As someone who joined the industry from a film school, at times, I feel it is the crew who don’t feel safe enough on set from us actors. They are intimidated. Actor araha hai, sub chezain saf hon, make up room saf ho, aray actor araha hai crocodile to nahe araha. Such attitudes need to change,” she said.

As the discussion veered towards content creation and consumption, she added that filmmakers and actors have to adapt because the audience’s horizon has already broadened, all thanks to OTT platforms.

“The perceptions are changing. I don’t feel that people are now going to watch women dancing in saris and their hair blowing in the wind. Look at what Mansha did with Laal Kabootar. It was an organic form of storytelling. So with more people viewing content on OTT platforms, we see that masala films are no longer the major hits, rather content-driven films are doing well. So that means that the audience wants a change. It is us; we have to adapt.” the Bela Pur ki Dayan star emphasized. 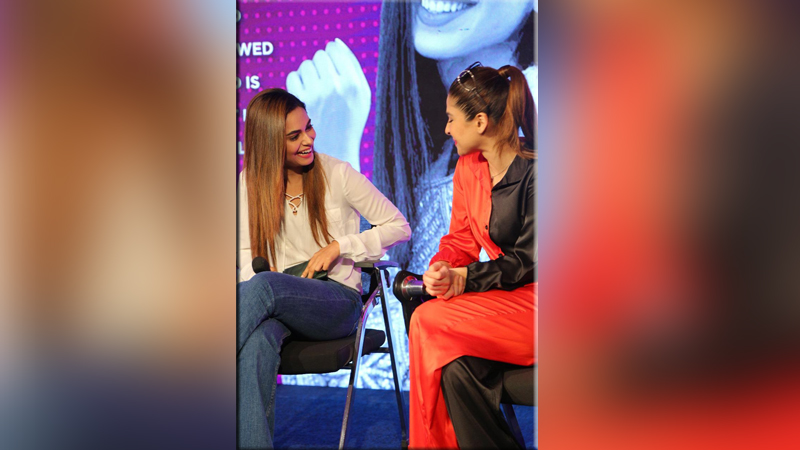 Being a film school graduate, she stressed that the next generation needs formal education to be able to take the industry in the right direction.

“When people ask me how important education in acting and film making is, I don’t know if they are ridiculing me or are serious.”

“We need to learn and get a formal education. I have written my 1st feature film. If I can do it, everyone can do it. Look to follow your dreams. You have to be a bit stubborn. As a child, I used to dance in my room with music on full volume, and I didn’t need an audience or money. It was my passion. That determination is necessary, and fire has to be enacted. So when you become a professional or go for an education, you explore different avenues, but the inner drive is what moves you”, she told all the aspiring students in the audience.

In the last part of the discussion, she was asked about the worst and the best thing about working in the Pakistani industry.

“The worst part is that you have to presentable at all times. You can’t repeat clothes, and you have to look a certain way, whatever the occasion. That is a challenge. However, at the same time, I feel that it makes me powerful. This is something important to me. We talk about the need for women to be empowered. But God has given women the power to continue our civilization. So we don’t need to be empowered. We already have the power. So yes, being an actor makes me feel powerful in a way,” she added.

With this question and rousing applause, the panel discussion came to an end. Amar Khan has not only been famous for her performances, but also for her views that perfectly fall in line with the contemporary times in the industry. There is definitely a lot more to learn from the actress.