Death toll from communal violence in Delhi rises to 23 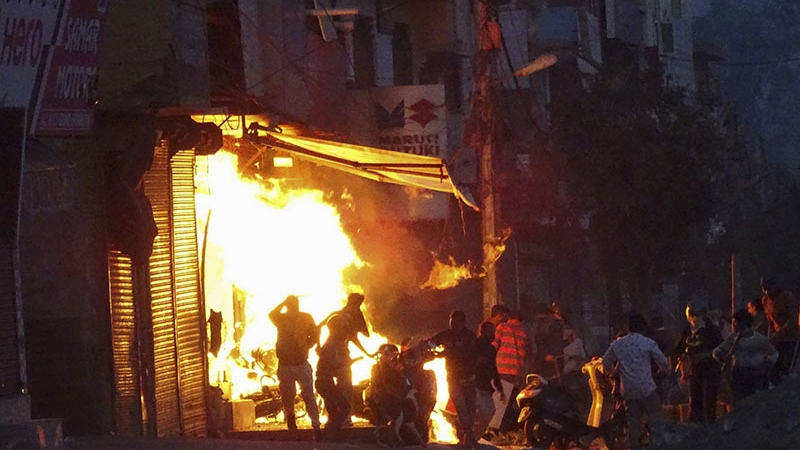 The death toll from deadly communal violence in New Delhi rose to 23 on Wednesday, Times of India reported.

Protests against a contentious citizenship law began on a smaller scale on Sunday but escalated on Monday and Tuesday into running battles between Hindus and Muslims in New Delhi’s north-east, where rioters armed with stones, swords and even guns were out in force.

Breaking his silence on the violence in the capital, Indian Prime Minister Narendra Modi on Wednesday afternoon appealed for calm.

India’s Supreme Court termed the clashes as “unfortunate” while refusing to entertain pleas on them saying that it was for a high court to take note of the matter, The Print reported, quoting PTI.

Meanwhile, the Delhi High Court heard a plea on the communal violence and said it cannot let “another 1984” happen on its “watch”, reported BBC. In 1984, more than 3,000 Sikhs were killed in anti-Sikh riots in the city, the publication added.

Meanwhile, the capital’s Chief Minister Arvind Kejriwal said the army should be called in and a curfew should also be imposed in the rest of the affected areas.

Additionally, the report added that a shoot-at-sight order was issued on Tuesday evening in the clash-hit areas.

On Wednesday, parts of the riot-hit areas were deserted, and a Reuters witness saw paramilitary and police forces deployed in much greater numbers. Reuters reported that there were no immediate reports of any fighting on Wednesday.

Police characterised the situation as tense but under control. Schools remained closed, and a ban on assembly continued.

However, Hindustan Times reported that fresh rounds of violence erupted in two localities of East Delhi on Wednesday morning.

“The situation is relatively better than yesterday in the violence hit areas,” the director of the Delhi fire department Atul Garg told Reuters on Wednesday, adding that the fire department had stationed additional vehicles in the area and senior officials are camping there.

“There are no rioters on the streets and our vehicles have been able to reach the area,” he said.

All Metro stations in the city have been reopened. At least 20 people died and nearly 200 others were wounded in the first two days of violence, the director of the hospital where people were taken, told AFP on Wednesday. Sixty people had suffered gunshot wounds, according to the director, Sunil Kumar.

United Nations Secretary General Antonio Guterres is closely following the situation in New Delhi, First Post reported. His spokesperson Stephane Dujarric said the UN chief had stressed that demonstrators should be allowed to demonstrate peacefully and security forces should show restraint. “I think it’s very important that demonstrators be allowed to demonstrate peacefully and that security forces show restraint. This is the SG’s constant position,” he said, adding that they were “obviously” following the situation closely.

Reuters witnesses saw mobs wielding sticks, pipes and stones walking down streets in parts of northeast Delhi on Tuesday, amid incidents of arson, looting and stone-throwing. Clouds of black smoke billowed from a tyre market that had been set alight in the area, as fire trucks rushed to control the blaze. The riots coincided with the visit of US President Donald Trump, who held bilateral meetings with Prime Minister Narendra Modi elsewhere in the vast metropolis on Tuesday.

After his talks with Modi, Trump told reporters he had heard about the violence but did not discuss it with the Indian prime minister.

As Air Force One flew President Trump and his delegation out of New Delhi late on Tuesday, Muslim families huddled in a mosque in a northeast corner of the city, praying Hindu mobs wouldn’t burn it down.

Police on Tuesday imposed a restriction on large gatherings in the area as the violence continued, with reports of stone pelting and more structures set ablaze. Media reports said police fired tear gas in an effort to disperse the rioters.

Kejriwal, who visited the Guru Teg Bahadur Hospital, earlier pleaded for the “madness to stop”, according to PTI. Delhi Police spokesman Mandeep Randhawa called on locals “not to take the law in their own hands”. National Home Minister Amit Shah, whose ministry controls law and order in the capital region, met with senior Delhi government officials and promised to deploy more police if they were needed, Kejriwal said. National Security Adviser Ajit Doval was in Delhi’s Seelampur district to inspect the area after the outbreak of violence, India Today television channel reported. An AFP reporter saw at least 10 injured people admitted to Guru Teg Bahadur Hospital over a half-hour period, some claiming to have bullet wounds. “Since yesterday, we’ve been calling the police to enforce a curfew, to send reinforcements,” Saurabh Sharma, a student from a riot-hit area who took his injured friend to the hospital, told AFP. “But no one has come. There are only three policemen.” “The protesters are attacking police wherever they are present and clashing among each other where the police aren’t there,” senior policeman Alok Kumar told AFP earlier on Tuesday. One firefighter was injured by a stone and five fire trucks were damaged, PTI reported. Broadcaster NDTV said three of its reporters and a cameraman were attacked by a mob on the northeastern fringe of the city of 20 million people. “There is hardly any police presence in the area. Rioters are running around threatening people, vandalising shops,” a resident of the poor, migrant neighbourhood of Maujpur told PTI. In Jaffrabad, one of the poorest neighbourhoods on the fringes of Delhi and home to shanty colonies, an AFP reporter saw locals turn off their lights and lock their doors amid a massive police presence. Police manning barricades said mobs in the area were threatening journalists and that their officers had come under attack. “People are killing (each other). Bullets are being fired here,” a tailor in Jaffrabad told AFP, adding that he was returning home to his village in northern Uttar Pradesh state.