Kuwait says coronavirus cases has risen to 25, from 18, on Wednesday
Official: UAE is ‘well prepared and equipped for the worst-case scenarios’ 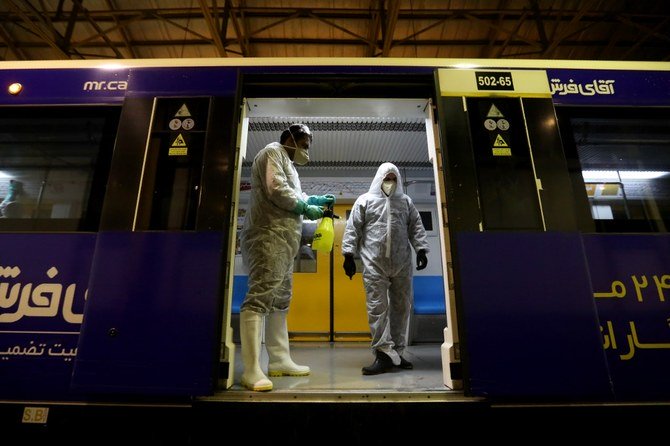 DUBAI: Nineteen people have died and 139 people have been infected by coronavirus in Iran, health ministry spokesman Kianush Jahanpur said on Wednesday in an announcement on state TV.
Iran has the highest number of deaths from coronavirus outside China, where the virus emerged late last year.
In Kuwait, the health ministry on Wednesday said the number of people with coronavirus has risen to 25 and announced that schools would be closed next week.

The UAE also said on Wednesday that it was “well prepared and equipped for the worst case scenarios” as the coronavirus spreads in Middle East, an official from the country’s National Emergency Crisis and Disasters Management Authority.

The UAE has enough facilities to quarantine patients and relevant bodies have been instructed to undertake “a complete surveillance of all people entering the country”, the official said. The UAE has reported 13 people have been diagnosed with the infection, of whom three have recovered and two are in critical condition.
Meanwhile in Oman, the country’s Minister of Health Dr. Ahmed bin Mohammed Al-Saeedi, said: “I am not going to underestimate the severity of the disease, but any unjustified exaggeration is unnecessary. There is no need for any unjustified intimidation by the novel coronavirus and the cases that we have reported are only minor symptoms.”
Meanwhile, Egypt Air suspended its flights to China on Wednesday due to the coronavirus outbreak in the region.
“Among those who had been suspected of the virus, 35 have been confirmed and two died of the coronavirus infection,” said Health Ministry spokesman Kianoush Jahanpour. He said 95 people had been infected across Iran.

The Health Ministry urged Iranians to stay at home.
Iran said on Monday 900 cases were suspected, dismissing claims by a lawmaker from Qom who said 50 people had died in the city, the epicenter of the new coronavirus outbreak.

Iran, which confirmed its first two deaths last week in Qom, has yet to say how many people it has quarantined, but the semi-official Mehr news agency said 320 people had been hospitalized.
Iraj Harirchi, Iran’s deputy health minister, has tested positive for the coronavirus and is now under quarantine.
Seven Arab countries have reported their first cases of coronavirus, with those infected all having links to Iran. Kuwait said the number of infected people there had risen to eight.

Algeria has reported its first confirmed case of the new coronavirus, an Italian man who arrived in the country on Feb. 17 and has been put into isolation.
Bahrain on Wednesday said coronavirus cases have risen to 26, including six Saudi women, as three more people had tested positive for the virus.
The country has suspended all private and public schools, universities, and nurseries across the kingdom for two weeks from Tuesday amid concerns regarding the coronavirus outbreak. It earlier suspended all flights from Dubai and Sharjah.

The Saudi Ministry of Health said that it was coordinating with Bahraini health officials for the treatment of the Saudi women who had visited Iran. They will remain in Bahrain until they are fully recovered. The Kingdom has advised citizens and residents to avoid traveling to Italy and Japan.
Iranian authorities have ordered the nationwide cancellation of concerts and soccer matches and the closure of schools and universities in many provinces.

The head of Qom’s Medical Science University, Mohammad Reza Ghadir, expressed concern over “the spread of those people infected by the virus across the city,” adding the Health Ministry had banned releasing figures linked to the coronavirus.

Many Iranians took to social media to accuse authorities of concealing the facts.
Rouhani called for calm, saying the outbreak was no worse than other epidemics that Iran has weathered.

The sight of Iranians wearing masks and gloves is now common in much of the country.
Sales of masks, disinfectant gels and disposable gloves have soared in Tehran and other cities, with officials vowing to prevent hoarding and shortages by boosting production.
Iran has shut schools, universities and cultural centers until the end of the week in an effort to stop the spread of coronavirus.

The UAE has banned all flights to and from Iran. The UAE, home to long-haul carriers Emirates and Etihad, remains a key international transit route for Iran’s 80 million people.

Emirates, the government-owned carrier based in Dubai, flies daily to Tehran. Its low-cost sister airline, flydubai, flies to multiple Iranian cities, as does the Sharjah-based low-cost carrier Air Arabia.

Kazakhstan plans to suspend flights to and from Iran from March 1 because of the spread of coronavirus in the Gulf nation, Kazakhstan’s chief sanitary doctor, Zhandarbek Bekshin, said on Wednesday.

Kazakhstan will also reduce the number of flights to and from South Korea, another country with a large number of coronavirus cases, he told a briefing.

An Iraqi family of four who returned from a visit to Iran tested positive for the coronavirus, the first Iraqis known to have caught the disease.

The four cases in Kirkuk province brought Iraq’s total to five after it reported its first case on Monday, an Iranian theology student in Najaf. Iraq is deeply concerned about its exposure to the Iranian outbreak, as it has deep cultural and religious ties with its neighbor and typically receives millions of Iranians each year.

The Iraqi government, which has already banned all travel from China and Iran, added Italy, Thailand, South Korea, Singapore and Japan to its travel ban list on Tuesday. Returning Iraqi citizens are exempt, as are diplomats.

Populist Shiite cleric Moqtada Al-Sadr suspended a call for his followers to hold a “million-man” protest, saying he had decide to forbid the events “for your health and life, for they are more important to me than anything else.”

“I had called for million-man protests and sit-ins against sectarian power-sharing and today I forbid you from them for your health and life, for they are more important to me than anything else,” he said in a statement. It was not immediately clear how the government’s call on citizens to avoid public gatherings would affect the strength of anti-government protests, and the response of security forces.
A Turkish Airlines plane flying from Iran was diverted to Ankara on Tuesday at the Turkish Health Ministry’s request and an aviation news website said one passenger was suspected of being infected by coronavirus.

Turkey’s Demiroren news agency broadcast video showing ambulances lined up beside the plane, with several personnel wearing white protective suits on the tarmac.
The plane was flying from Tehran and had been scheduled to land in Istanbul. Turkey shut its borders to Iran on Sunday and cut flights due to the spread of the virus in that country.
Oman’s Khasab port has suspended the import and export of goods to and from Iran from Feb. 26.