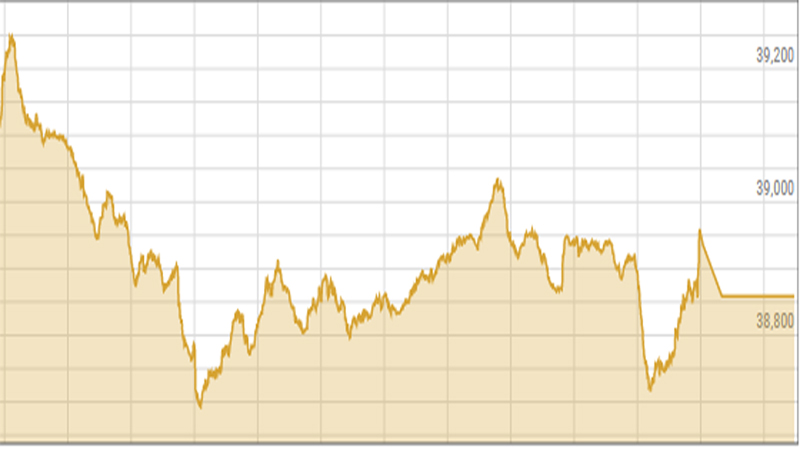 A day after plunging over 1,100 points, the stock market extended its losses and retreated a further 285 points on Tuesday in the absence of major positive triggers that could provide direction to the market.

Investor sentiment was also dampened by political uncertainty after a provincial cabinet decided not to further extend the bail granted on medical grounds to former prime minister Nawaz Sharif.

A host of financial results were released during the trading session, however, they failed to turn direction of the market.

Following a brief open in the negative zone, the KSE-100 index staged a recovery and rose in the first hour. However, the gains were wiped out shortly afterwards and the market reported losses for the rest of the session.

A buying spree towards the end of the day helped the market inch up marginally. Despite weak investor sentiment, the automobile and steel sectors closed with gains.

Arif Habib Limited, in its report, stated that the market opened down by 105 points but quickly went up by 104 points for a short while. Later, it fell back into the red zone for the rest of the session.

“During the session, the index lost 451 points and closed down by 285 points,” it said. “Exploration and production companies, banks and oil marketing firms mainly faced selling pressure whereas cement and steel sectors recorded price gains.”

Pakistan Petroleum announced its financial results but they failed to impress investors, leading to further selling of the stock.

The cement sector led the volumes table with trading in 17.7 million shares, followed by banks (17.6 million) and technology firms (12.4 million).

Among individual stocks, Unity Foods topped the chart with trading in 10 million shares, followed by The Bank of Punjab (9.2 million) and Hascol Petroleum (8.6 million), the report added.

Pakistan Petroleum (-2.9%) from the exploration and production sector declared its 1HFY20 earnings, where the company posted earnings per share of Rs8.98 with no cash payout.

“Going forward, we expect market to remain bearish in the short term on the back of uncertainty on the macro front,” the analyst said.

Overall, trading volumes decreased to 124.3 million shares compared with Monday’s tally of 144.3 million. The value of shares traded during the day was Rs6 billion. Shares of 336 companies were traded. At the end of the day, 159 stocks closed higher, 162 declined and 15 remained unchanged.

Foreign institutional investors were net sellers of Rs841.6 million worth of shares during the trading session, according to data compiled by the National Clearing Company of Pakistan.