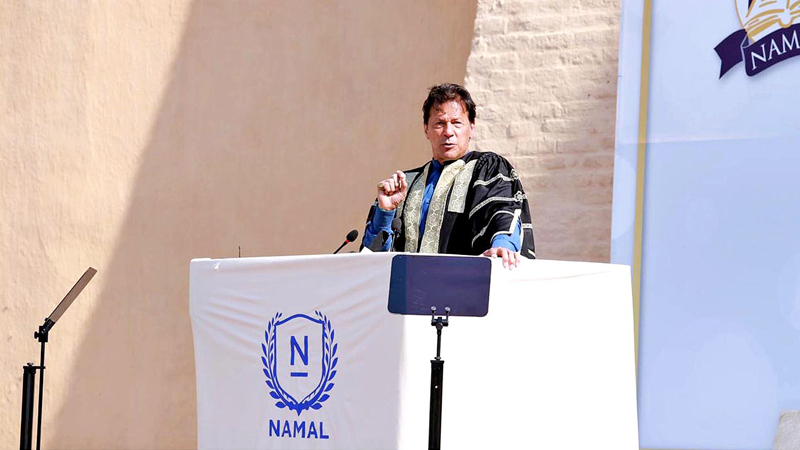 Prime Minister Imran Khan on Sunday said that former rulers had made Pakistan debtor. While addressing the convocation of NAMAL university, the premier said that the struggle to make country progressive should never end. “The Pakistan Tehreek-e-Insaf (PTI) is the first government which is making corrupt elements accountable,” he added.

He also congratulated the parents of the graduating students and told them not to be so serious. “Your children have done great. This is a day of joy for you all,” he said.

Imran stressed upon the country’s youth, especially students, to clearly identify a roadmap of life with clear objectives to achieve their aims and always learn from the bitter lessons of life.

The prime minister said that students should listen to their inner voice from their heart or personal inclination which could steer their future course in life.

He said the man was created with certain objectives. He said Allah Almighty had bestowed upon human beings with different potentials, which were often left unattended. “You can achieve everything you have pictured or dreamt of in your life. In this struggle, human being could stumble over hurdles and difficulties. But these stumbling blocks should not lead you to frustration,” he advised a cheering assembly of students and faculty members.

The prime minister recalled his long cricket career in this regard. “The craze often arises from heart and propels people to go forth. You have to make strong determination and once you made it, burn your boats as there is no way to return,” he added.

The prime minister said difficult times should be taken as part of learning and soul searching, which enable a person to explore the factors behind failure. He said that these lessons learnt, coupled with high-level education, could help enhance the human capabilities to analyse these factors. “It is a progression in life and a demoralised person cannot excel in life. Never feel dishearten from the bad effects of failure and hard times… seek how to manage them by switching goals from one to other,” he added.

He further said Quaid-i-Azam Mohammad Ali Jinnah and Allama Iqbal wanted the establishment of a true Islamic welfare state on the pattern of world’s first welfare state of Madina, which was established by Prophet Muhammad (PBUH).

He said it was the most successful model for the world to emulate and a great civilization emerged on the basis of these modern principles. The country which adopted those principles achieved progress, he said, adding that even the Scandinavian countries were progressing as they had adopted the basic principles of humanity.

The prime minister said that in China, its leadership had resolved some 30 years back to lift a huge population from the poverty and now it was the fastest growing economy in the world with its GDP growth rate hovering around $30 trillion.

He said a strong nation would rise on the principles of the state of Madina. The main thing was to correct the life path as science could not answer two things, ie; the basic aim of life and what to happen in the life hereafter, he added.

Being the most successful personality in the world, Prophet Muhammad (PBUH) stood distinct and role model for all humans, he said, and urged the students to follow his way of life.

He said that on behalf of people of Pakistan, he offered his gratitude over the way, the leadership of United Arab Emirates stood with Pakistan at a time when it needed friends.

“The UAE proved as a friend in need and helped us at a time when we faced probably one of the critical economic challenges,” he added.

The prime minister also mentioned the support extended by the leadership of Saudi Arabia and China which helped his government to manage the national economy. “My country will never forget the way you stood with us in time of need,” he observed. Meanwhile, Imran Khan, while launching a gigantic project to revive decades old Kundian Forest over 10,000 acres, directed the Punjab government to go tough on tree fellers.

“The tree fellers are criminals. I ask Punjab government to treat them as criminals. Don’t impose merely fine on them rather arrest them too. This is an offense not only against the nation but also our children,” the prime minister said while addressing the inauguration ceremony of spring tree plantation at Kundian Forest. Chief Minister Sardar Usman Buzdar, Adviser to PM on Climate Change Malik Amin Aslam, provincial cabinet members, representatives of environmental protection organisations, leaders of Pakistan Tehreek-e-Insaf and a huge number of students attended the ceremony. Of total 19,271 acres of forest area, around 5,000 acres has some green cover, 5,222 acres are barren and would be turned into forest by massive forestation during next four years under prime minister’s 10 Billion Tree Tsunami Project. The prime minister who planted a sapling, asked the locals to guard the forest against tree fellers and land grabbers.

Under this spring tree plantation drive, 250 million saplings would be planted across the country with 1.3 million to be planted in one day as part of Plant for Pakistan Day observed on the day.