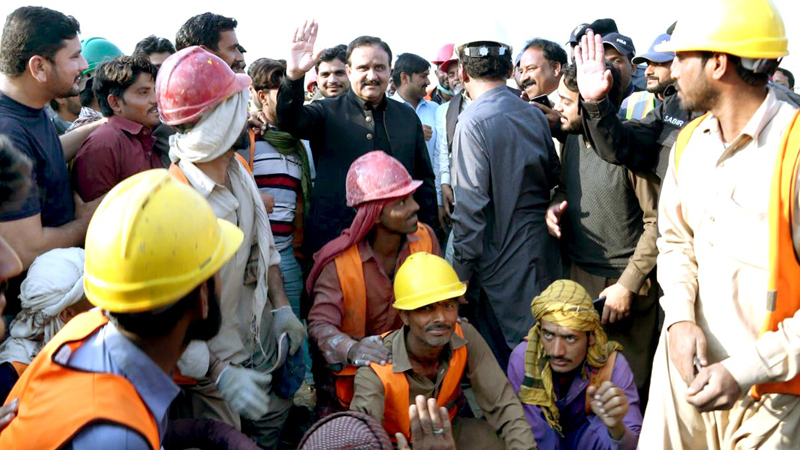 Punjab Chief Minister Sardar Usman Buzdar has said that bringing a green revolution in Pakistan is a flagship programme of the PTI government.

He said Prime Minister Imran Khan himself inaugurated Clean & Green Pakistan Program last year, which is being successfully moved forward by the government. He was addressing a ceremony held under Plantation Campaign of 2020 for the restoration of forests in Kundian an area of Mianwali.

He said that restoration of Kundian forests will improve the process of climate change besides generating job opportunities and protecting wildlife. He said that the Punjab government has started Municipal Services Program at a cost of Rs24 billion and under this programme elected representatives have started providing different services in their respective area. He asked the people to actively participate in Clean & Green Pakistan project. He said that Pakistan and Punjab will be made clean and green under the leadership of Prime Minister Imran Khan. He said that Mianwali is very close to my heart and its problems are being solved on a priority basis. Chief Minister planted the sapling of Palkan. 1200 student of the schools also planted saplings during the ceremony.

Provincial Minister for Forests Sibtain Khan while addressing the ceremony said that forests department has so far been planted 26 lac saplings in the province and today 3.5 lac saplings are being planted. He said that the area of forest will be increased by promoting plantation. 1.5 lac people will get jobs in the recent year whereas job opportunities for five lac people will be generated in the next four years. He said that five times increase has been made in the fine for wood theft. He said that forest department nurseries have five crore and 19 lac saplings which will be provided at reasonable rates.

Meanwhile, Buzdar said that Prime Minister Imran Khan has exposed mega personalities socked with corruption. The virus of corruption of previous regimes has weakened the roots of Pakistan. Opposition parties have no other agenda rather than saving their corruption. In a statement issued today, Usman Buzdar said that people of Pakistan have given five years mandate to Pakistan Tehreek e Insaf and PTI government will come up to their expectation and will complete its tenure. He said that the desires of opposition will remain desires in future as well. Prime Minister Imran Khan is a ray of hope for 22 crore people of Pakistan.

Buzdar will lay the foundation stone of Mother & Child Hospital Project in Sir Ganga Ram Hospital on 24th February. The 600-bed hospital will be set up at a cost of Rs7 billion. Four billion will be spent on the construction whereas the rest of three billion will be utilized for the procurement of medical equipment and machinery. Modern healthcare facilities will be made available for the mother & child in this hospital. The building of Mother & Child hospital will have ten stories and 13 operation theatres. Emergency ward will be established on the ground floor.