PTI government will fall in next six months: Bilawal 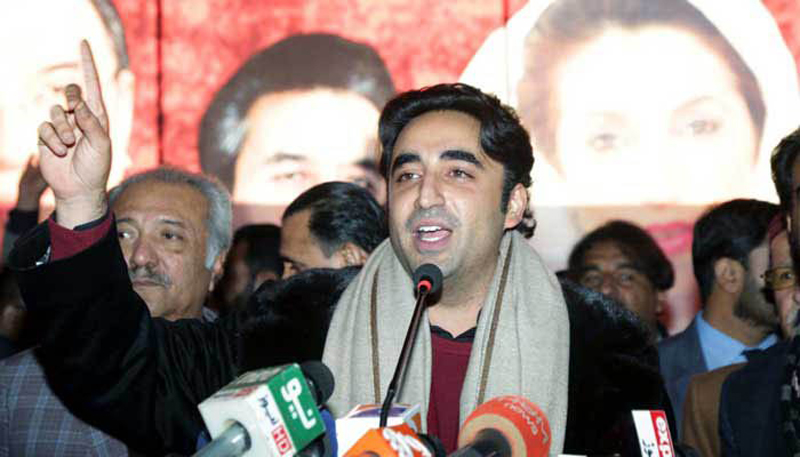 Pakistan People’s Party Chairman Bilawal Bhutto Zardari Saturday said that the Pakistan Tehreek-e-Insaf (PTI) government will fall in six months, adding that the rulers will themselves be responsible for their ouster due to anti-people policies.

“Asif Ali Zardari said on the very first day of this government that it will be toppled due to its own policies and now I am saying that it will be over in next six months,” Bilawal told reporters here at Bilawal House. He said the government was formed in result of a ‘contract’ and therefore it has no authority. “The contract of the government is going to expire soon. We’ll not form the government in the current power-sharing formula with the establishment but the PPP will revisit this formula after coming into power,” he said. “We’ll not make any deal for the power sharing as the PPP ensured the civilian supremacy and strengthened the parliament through 18th amendment,” he added.

In reply to a question, the PPP chairman said that though there are just seven MPAs of PPP in Punjab Assembly but they are the ‘real opposition’ in the province. “The PPP had just only 17 MNAs in 90s when Nawaz Sharif used to be a ‘selected’ leader and he tried to become Ameer ul Momineen but Benazir Bhutto didn’t let him do so with the support of just 17 MNAs,” he said.

He was of the view that Sindh Chief Minister Murad Ali Shah is delivering much better than the chief ministers of Punjab, KP and Balochistan. He said the incident of dog biting becomes a ‘breaking news’ if it happens in Sindh but the same case isn’t highlighted if it is in Lahore or Faisalabad. “How the HIV of Sindh is bad but the HIV of Punjab is good,” he questioned.

According to Bilawal, the inflation isn’t going anywhere as it has just started. “Let the summer come. There will be no electricity and no AC but the utility bills will be very high,” he feared.

Bilawal observed that ‘suffocation’ is at its peak these days as the freedom media had 16 months back is not seen any more. “Yes, there should be a dialogue between institutions but you have to take your share yourself,” he said, adding that no institution is ready to admit the power of people that rests with the parliament only as parliamentarians are the real representatives of the people. Democracy is a continuous process as it cannot be achieved in a day or two, he said.

According to Bilawal, there were some filters within the governments when there was dictatorship in the country as “we have the example of Ch Pervaiz Elahi’s government in Punjab when a dictator was ruling the country.”