Sader Issa, a dentistry student in Syria, couldn’t be prouder of his beloved father Jad. Shattering common misconceptions about those with Down Syndrome, Jad raised his son with the utmost devotion, providing him a life filled with love and never leaving him wanting for anything.

Wanting to raise awareness about the condition, Sader shared his heartwarming tale of being brought up by his wonderful dad and his candid narrative is an eye-opening testimony on the capabilities of those with Down Syndrome. 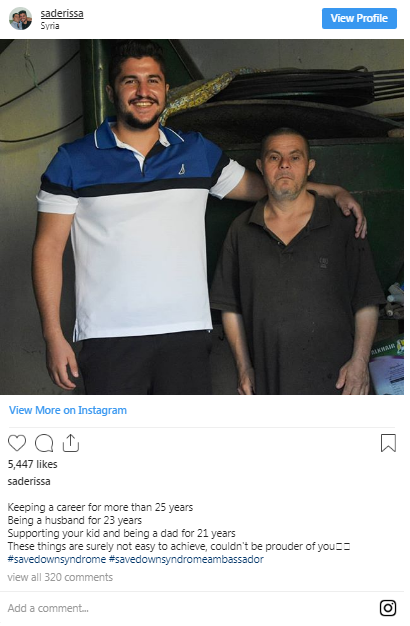 According to Issa, if he had a choice, he wouldn’t change a thing and credits his achievements to the love, care, and encouragement he received from his dad growing up. The young man pursued a career in dentistry and is now a third-year student. “Throughout my life, he has been the greatest support for me when I needed it,” he says.

In spite of living with Down syndrome, Jad worked at the local mill factory and supported his family for over 20 years. Proud of his son’s success, every time he meets new people, the man states, “My son is a doctor.” And according to Issa, his father’s “eyes are filled with joy and satisfaction as if to express: ‘Yes, I have Down’s syndrome, but I raised this man and did everything in my power to make him become a doctor and help others.’”