* Launched in 375 rural union councils of 23 districts of Pakistan, the programme will feature transferring of 200,000 assets to deserving households 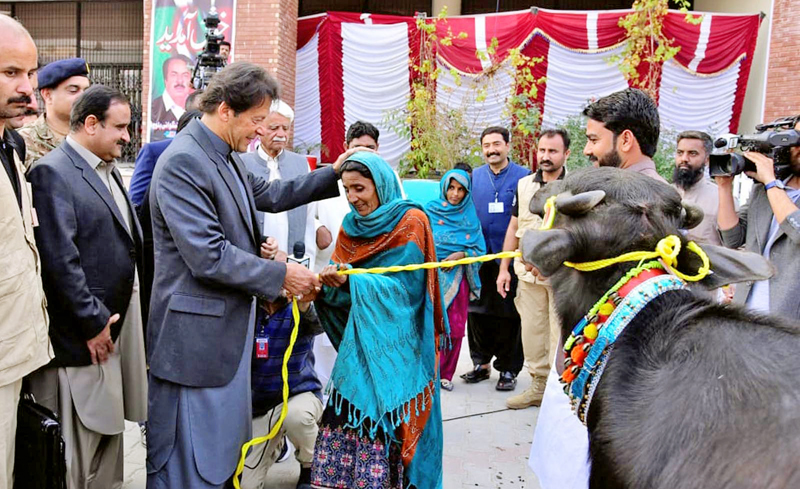 Taking his government’s anti-poverty initiative of Ehsaas a step forward, Prime Minister Imran Khan on Friday launched Ehsaas Amdan Program, aimed at creating opportunities for respectable livelihood for the most disadvantaged people through transfer of assets.

Addressing the launching ceremony here, the prime minister said the government is striving to develop Pakistan as a welfare state as had been envisioned under its ideology. So far, the country has witnessed the pro-rich development that instead of benefiting the poor, the gap in the society widened, he said.

On the stage were also Kulsoom Bibi and Nokar Hussain, the two beneficiaries of the program who also spoke high of prime minister’s anti-poverty initiatives to make them live an independent and respectable life.

Under the Rs 15 billion program, the government will give away small assets to the people living below poverty line to make them earn a living and come out of the shackles of poverty. The assets include livestock (goats, cows, buffaloes and poultry), agricultural inputs, body of auto rickshaws, and inputs for small retail outlets and small enterprises.

Launched in 375 rural union councils of 23 districts of Pakistan, the programme will feature transferring of around 200,000 assets to the deserving households with 60 percent women and 30 percent youth beneficiaries.

The prime minister told the gathering that the State of Madinah had taken the responsibility of its poor people, and added China too has become a great nation by steering its 700 million people out of poverty. “This is our dream about Pakistan too,” the prime minister said, who also distributed assets including agriculture tools, a cotton ginning machine, cattle and rickshaws among the poor people.

He said the Ehsaas Program is an effort to uplift the people as it consists of Kafalat Card for the weakest segment, Amdan Program to increase income, health insurance cover for six million families, loan scheme for small business and 50,000 scholarships for the youth. He said the government will provide interest-free loans to around 80,000 every month. Moreover, he said, the government has already set up 180 shelter homes and will widen the project countrywide to ensure that no poor has to spend the night in the open and without food. Besides, the government is promulgating a law for provision of legal services to the people who cannot afford a lawyer to contest case in the court, he added.

The prime minister said the government is in the process of introducing a uniform education curriculum with no discrimination among rich and poor or seminaries and government and private schools. “This is more difficult. This is not easy. During the last 70 years, we have destroyed our education system and it will take time to rectify it,” he remarked. He said a carrot and stick policy will also be introduced for the teachers and the habitually absent teachers will be replaced with the efficient and punctual ones.

He appreciated the new Inspector General of Punjab Police Shoaib Dastgir who has started the police reform and is apprehending the notorious criminals who earlier used to enjoy the protection.

The prime minister told the gathering that Pakistan has come out of the difficult time, with 75 percent reduction in the current account deficit, appreciating rupee, improving stock market and increasing foreign direct investment. In the coming days, the people will get more good news, he added.