Citizens of nowhere: Trump ban raises fear for US Rohingya 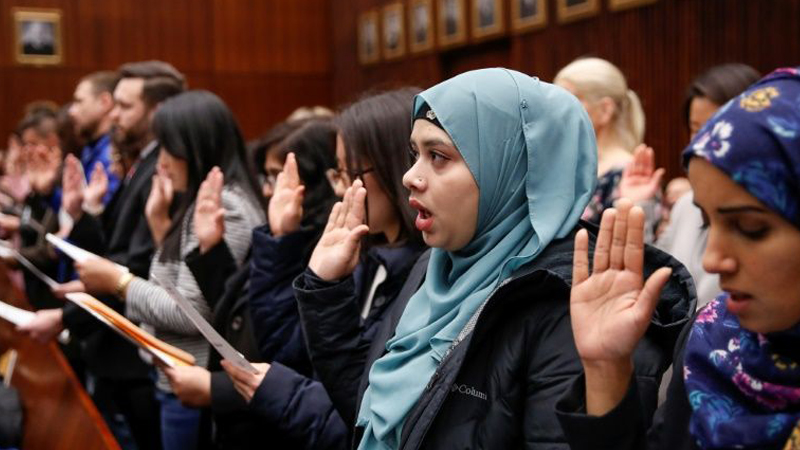 A refugee from Myanmar’s tyrannized Rohingya minority, Lila Mubarak embodies perfectly the “poor, huddled masses” welcomed to the United States for more than a century by a bronze plaque at the foot of the Statue of Liberty.

The 27-year-old beams as she recounts her difficult path to citizenship a few short years after fleeing persecution in her homeland to make a new life in America’s third city, Chicago.

“I’m so happy to be an American citizen because I was stateless. This is a first for me,” Mubarak said after becoming naturalized a few days ago.

But fears are growing in America’s 8,000-strong community of Rohingya — a Muslim ethnic group described as one of the world’s most oppressed — that they might be among the last to benefit from American largesse.

President Donald Trump’s inclusion of Myanmar beginning Friday on a list of countries with harsh US entry restrictions has laid bare the frailty of the community’s prospects for peace.

Mubarak’s journey to the shores of Lake Michigan — she came via Malaysia — mirrors the stories of many Rohingya.

Growing up, she never imagined exile in America because she had no reason to flee her southeast Asian homeland, formerly known as Burma before the country’s ruling junta made the switch in 1989.

After getting a green card five years ago, she attended classes at the Rohingya Cultural Center in Chicago, a Midwestern city that is home to around a quarter of America’s Rohingya.

At its height, the Rohingya population numbered about 800,000 in Myanmar, a small fraction of the country’s mostly Buddhist population of 54 million.

Mistreated for generations, they were stripped of their citizenship in 1982 and denied education and health care.

Then in 2013, religious tensions heightened and many Rohingya villages were torched, forcing nearly 200,000 into camps.

Myanmar’s army has been accused of mass murder, systematic rape and other abuse amounting to what the US Holocaust Memorial Museum describes as compelling evidence of ethnic cleansing, crimes against humanity and genocide.

Abdul Jabbar Amanullah, who fled in 2012, works as a senior case manager at the Rohingya center, helping new arrivals get work. Many are employed to clean O’Hare International Airport or wash dishes at a nearby casino.

“The jobs are good for new Rohingya residents because they don’t require much English at all and the pay isn’t bad,” Amanullah said, adding that while many work for $15 an hour, a few have been able to buy their own homes.

The center’s director Nasir Zakaria, who escaped Myanmar as a 14-year-old by paddling to Bangladesh, says the Rohingya love their adoptive community, which has the familiarity of village life back home.

He talks online to his parents and several siblings who remain — cell phones are illegal for Rohingya in Myanmar — and hopes one day to see them again.

Poet Emma Lazarus’s 1883 sonnet on the Statue of Liberty enjoins the downtrodden Old World: “Give me your tired, your poor, your huddled masses yearning to breathe free, the wretched refuse of your teeming shore.”

For many, acting Homeland Security Deputy Secretary Ken Cuccinelli distilled Washington’s shift in attitude to refugees under Trump when he twisted the words last summer.

“Give me your tired and your poor who can stand on their own two feet and who will not become a public charge,” he said.

Effectively putting a halt to entries from those nations, it is not supposed to bar refugees fleeing persecution, the State Department told AFP.

But Azeem Ibrahim, director of the displacement and migration program at the Center for Global Policy, believes the message from the White House is clear.

“Somebody in this administration probably realized that this is among the largest refugee population in the world,” said the author of “The Rohingyas: Inside Myanmar’s Hidden Genocide.”

“So if you want to stop refugees you’re going to include one of the largest populations.”

Back at the Chicago Rohingya center, English and citizenship teacher Susan Chestnut says that when she started two years ago she was shocked at the low level of literacy among those she was helping.

“Imagine not knowing how to use a pencil. Most of them never had been in school until they started my classes,” the Chicago-area native told AFP.

Chestnut too believes that Trump’s visa restrictions are intended to convey Washington’s enmity to a people whose “resilience and courage” amazes her daily.

“They are not terrorists, they are not bad people. They don’t understand. I teach them that, as a citizen, one of the most important things you can do is vote, having a voice,” she said.

“They’ve never had that. They don’t know what it means to be a citizen. They are citizens of nowhere but they consider America their country.”