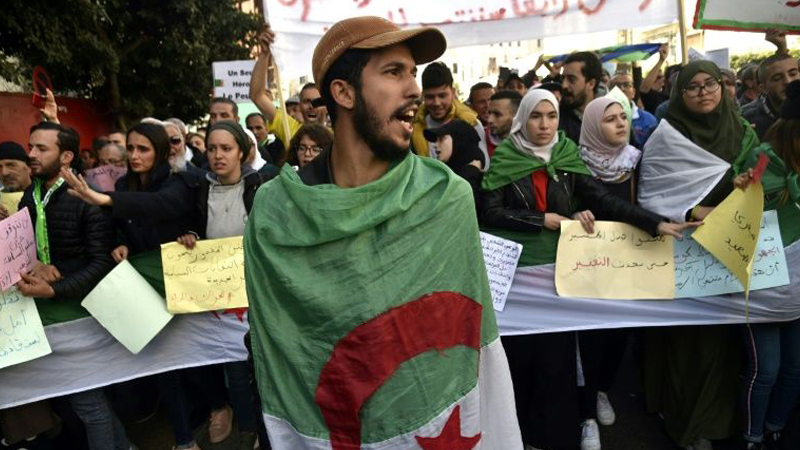 Algeria this weekend marks a year since the birth of an unprecedented protest movement known as “Hirak” — one that quickly forced an ailing president from power and is now looking to maintain momentum.

Anti-regime protesters and groups have designated Friday and Saturday a landmark moment, mobilising to “disqualify the system’s agenda of self-renewal, and to lay the foundations for a new republic.”

Protests first erupted on February 22 last year, in response to President Abdelaziz Bouteflika announcing he intended a run for a fifth term — despite being debilitated by a 2013 stroke. Less than six weeks later, he stepped down after losing the support of the then-army chief in the face of enormous weekly demonstrations.

But despite hordes — diplomats said “millions” — turning out after Bouteflika’s fall to demand an overhaul of the entire system, the military maintained a political stranglehold in the months that followed.

The election of Abdelmadjid Tebboune, once a prime minister under Bouteflika, as president in December appears to have reinforced the regime’s hand and further stalled the protest movement.

But many boycotted the poll — even the official turnout was below 40 percent — and demonstrators remain numerous.

“Soldiers have returned to their barracks, civilians are in power, so there is a democratic and constitutional facade” exactly as before, said Dalia Ghanem, a researcher at the Carnegie Middle East Center based in Beirut.

“Tebboune is just the civilian face of a regime that remains in the hands of the military.”

But “the capacity of the regime to adapt without really changing, and its resilience, will be tested in the coming years,” she contended.

It will dole out political handouts through limited reforms, she said, but an economic crisis caused by low oil prices will limit its largesse and hence its scope to maintain social peace.

The protest movement, meanwhile, has plenty of rethinking ahead, if it is to maintain momentum. The size of marches across the country on Friday and Saturday will represent a key test of the spontaneous, leaderless and youth-dominated anti-regime campaign.

Will it grasp President Tebboune’s extended hand and risk being swallowed up by the regime?

Or does it need to gear itself up for an institutional game, with the risk of exposing its own divisions and contradictions?

But whatever the challenges ahead, Hirak has already forced change on Algeria’s political order, in a context where real opposition was consistently hindered, gagged and co-opted during Bouteflika’s two decades at the helm.

And above all, in maintaining an overwhelmingly peaceful line, the movement has “succeeded in ensuring there has been no bloody confrontation or brutal repression,” said historian Karima Direche.

This marks a contrast with other countries, and also Algeria’s own past experience.

“To see Algerians congregating every Friday for the last year — women, men, Berbers… Muslim brothers and secularists — in the streets is extraordinary”, said Ghanem.

“A wall of a fear… has been destroyed by this new, heavily politicised generation, which knows what it wants,” she added.

Direche sees the coming year as allowing “stock-taking of what Algerians want collectively”. If the movement succeeds, “Algeria could become a case study”, Direche hopes, with much resting on the coming year.