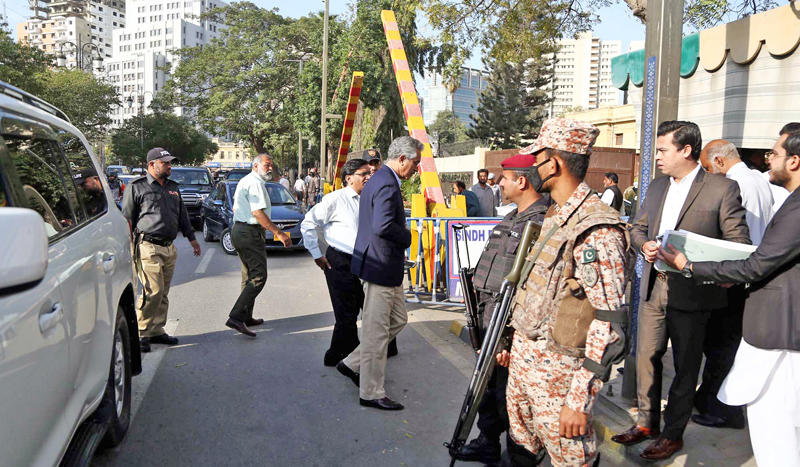 The Supreme Court on Friday directed the Pakistan Railways (PR) and Sindh government authorities to carry out an operation for the removal of the encroachments from all the railway lands meant for the long-delayed Karachi Circular Railway (KCR) to ensure smooth operations of the transport facility for the public.

A three-member bench, headed by Chief Justice of Pakistan Gulzar Ahmed, issued these directives to PR and provincial government authorities during the hearing of a case about the removal of the illegal encroachments from the land meant for KCR.

Resuming proceedings at the SC Karachi registry, the bench, which also comprised Justice Faisal Arab and Justice Sajjad Ali Shah as its members, expressed its displeasure over the failure of the federal and provincial authorities in implementing the court’s May 2019 order to revive the KCR.

The bench directed the railways authorities and the Sindh government to carry out an operation for the removal of the encroachments from all the railway lands meant for KCR and make sure that the transport facility is made functional within six months.

It further directed that such an operation be carried out with the aid and assistance of security forces all over the country.

The chief justice observed that the bench has still not been given any proper update of the KCR and its infrastructure, as neither the railways secretary has any instructions from the federal government nor the Advocate General of Sindh Salman Talibuddin from the provincial government.

The chief justice further observed that both the railways secretary and the AG Sindh said that they were dependent on China for the finances and for activation of the Chinese contractor company.

The bench directed the PR secretary to issue notices to occupants of railways land in the Gulshan-e-Iqbal area to vacate the premises, adding that it should be done within one week.

Meanwhile, the SC bench directed Pakistan Railways and the provincial government to chalk out a programme for the relocation of the people who will be affected by this operation and settle them in a decent manner by providing them with all utilities while ordering that “indiscriminate action be taken for the removal of encroachments”.

The bench directed them to submit weekly progress reports to the court containing the specific plan of the KCR and clearly showing the areas from where the encroachments had been removed.

Adjourning the hearing till March 6, the bench directed Chief Secretary Sindh, Attorney General of Pakistan and Advocate General of Sindh to appear before the court for dealing with the issue of the KCR’s revival.

AG Talibuddin requested the court to defer its orders for the anti-encroachment operation, arguing that it would dislocate a large number of residents from their houses.

He maintained that work on the recommendations prepared by the urban planning committee would be started very soon, including preparing a master plan for the metropolis.

The chief justice observed that the court had passed directives for the removal of encroachments from KCR land two years ago, but the authorities concerned did not prepare any plan for relocation of the people to be affected.

He remarked that the commercial activities were continuing on the encroached land and not a single illegal wedding hall had been demolished during the past two years.