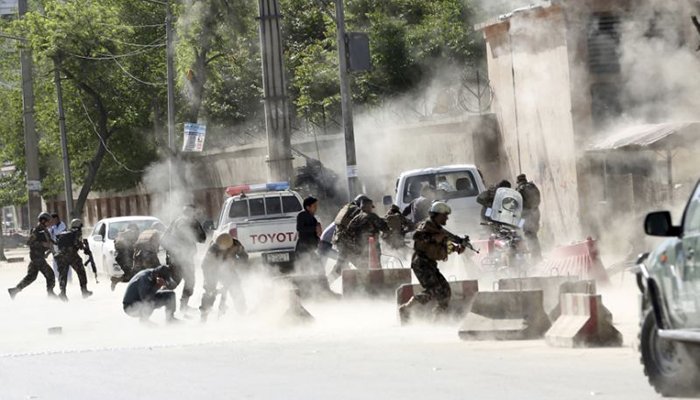 KABUL: An Afghan official announced on Friday that a week-long “reduction in violence” between the Taliban, the US, and Afghan security forces will commence shortly, the ceasefire has come ahead of the signing of a possible deal between Washington and the insurgents.

If the partial truce goes ahead, it would mark a historic step in more than 18 years of gruelling conflict in Afghanistan and would pave the way for a deal that could, ultimately, see the war end.

“The reduction in violence will start from 22 February and will last for one week,” Javed Faisal, Afghanistan’s National Security Council spokesman, told AFP.

US Forces-Afghanistan declined to comment. One Taliban source in Pakistan confirmed to AFP the partial truce would commence on Saturday.

The United States has been in talks with the Taliban for more than a year to secure a deal in which it would pull out thousands of troops in return for Taliban security guarantees and commitments.

A reduction in violence would show the Taliban can control their forces and demonstrate good faith ahead of any signing, which would see the Pentagon withdraw about half of the 12,000-13,000 troops currently in Afghanistan.

Afghan officials have said the US-Taliban deal could be finalised February 29 in Doha, assuming the reduction in violence proceeds to plan.

The Taliban source in Pakistan said: “both sides have agreed to sign the agreement on February 29”, adding that talks between the Taliban and the government, needed to cement a broader peace deal, are slated to start March 10.

A second Taliban official in Pakistan told AFP the reduction in violence might not start until Sunday.

Whether it is “Saturday or Sunday does not matter. The Taliban leadership council has basically given a green light to start the reduction in violence and sign the deal,” the official said, adding, “it’s happening”.

In Afghanistan’s southern province of Kandahar, which is seen as the Taliban’s heartland, one insurgent told AFP he had received orders to stand down.

“We have got the orders from our leadership that reduction in violence period will start from Saturday, and we have been ordered to be ready for it,” the source said.

The US and the Taliban have been tantalisingly close to a deal before, only to see President Donald Trump nix it in September at the 11th hour amid continued insurgent violence.

Any truce comes fraught with danger, and analysts warn the attempt to stem Afghanistan’s bloodshed is laced with complications and could fail at any time.

Or, worse still, they say warring parties could exploit a lull to reconfigure their forces and secure a battlefield advantage.

On Thursday, the deputy leader of the Taliban said the insurgents are “fully committed” to a deal with Washington.

“That we stuck with such turbulent talks with the enemy we have fought bitterly for two decades, even as death rained from the sky, testifies to our commitment to ending the hostilities and bringing peace to our country,” Sirajuddin Haqqani wrote in an opinion piece in the New York Times.

Haqqani is also head of the Haqqani network, a US-designated terror group that is one of the most dangerous factions fighting Afghan and US-led NATO forces in Afghanistan.