The Refugee Summit in Islamabad

The conference entitled “40 years of Afghan Refugees Presence in Pakistan: A New Partnership for Solidarity” was held in Islamabad. It was co-hosted by the Pakistan government and the United Nations High Commissioner for Refugees. The conference was attended by Secretary General Antonio Guterres, UNHCR chief Filippo Grandi, Prime Minister of Pakistan Imran Khan, Second Vice president of Afghanistan Ustad Sarwar Danish, Foreign Minister of Pakistan Shah Mehmood Qureshi, Minister of States and Frontier Regions Mehboob Sultan and other distinguished guests and dignitaries. 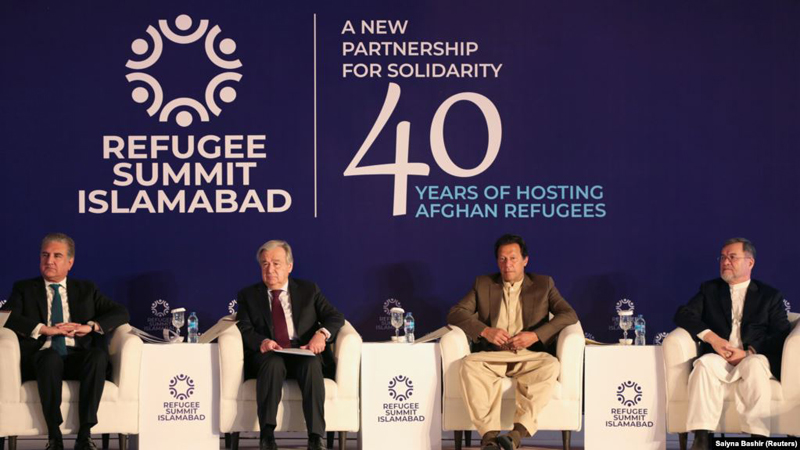 The conference took place at an important juncture when efforts at consolidating peace in Afghanistan are making progress. Besides providing an opportunity to highlight the exemplary compassion, generosity and hospitality exhibited by Pakistan in hosting one of the largest refugee populations in the world, the conference further identified key developments and milestones in the 40-year-long evolution of the Afghan refugee situation. The conference will build a positive narrative on refugees, especially at a time when borders are being closed on them and millions are being made stateless under nationalistic and ideological pretences.

It is rightly said that every gun that is made, every warship that is launched, and every rocket that is fired signifies a theft from those who are hungry and are not fed, those who are cold and are not clothed. This world in arms is just spending money. It is spending the sweat of its labourers, the genius of its scientists, the hopes of its children. Under the clouds of war, it is humanity hanging on a cross of iron.

An unfortunate tragedy shook the entire structure of Afghanistan during the post 9/11 era when millions of people had to flee their homes for their bare survival. Although it is the obligation of every person born in a safer place to help someone in danger, the woeful souls, surrounded by fears of death and violence, had no place to go. In that time of need Pakistan opened its doors to welcome its Afghan brethren. At that time Pakistan was struggling with multifaceted problems of rising violence, war against terror, volatile economic conditions and meagre economic resources, but it instantly provided food, shelter and clothing to three million refugees. Pakistan did not let Afghans bear the pain of homelessness alone.

UN High Commissioner for Refugees Filippo Grandi said that for the last forty years the people of Pakistan have stood with their Afghan neighbours. Iran has also been with Afghan refugees through times of hardship and loss. Over the years, governments and the people of the host countries have not only welcomed Afghans but have to, a large extent, absorbed them into the fabric of their societies. The history of Pakistan’s solidarity with Afghan refugees is honourable. It also shows that generosity has not come without cost. Hosting millions of refugees present enormous challenges. It has an impact on local economies, infrastructure, services, security, and environment.

United Nations Secretary General Antonio Guterres called upon other countries to support Pakistan and to show similar leadership in handling refugee flows across the world. He said that despite its own challenges Pakistan has sheltered and protected Afghan refugees with limited support from the international community.

Prime Minister Imran Khan said that keeping a complete check on refugee camps with a huge number of people would have been difficult for any government. He added that instability in Afghanistan is not in Pakistan’s interest. Khan said that the national and international media has highlighted that India’s belligerent rhetoric and aggressive actions are threatening the peace and security of the region. The prime minister assured the honourable guests of Pakistan’s support for Afghan peace and reconciliation. Sustainable peace and creation of a conducive environment would facilitate the return of Afghan refugees to their homeland with dignity and honour as per the teachings of Prophet Mohammad (peace be upon him).

Khan highlighted the dire human rights and humanitarian situation in the Indian-occupied Jammu and Kashmir as a result of India’s illegal and unilateral actions of August 5, 2019. The premier said that India’s ultranationalist ideology based on Nazism is going unchecked, and could lead to destruction, making the region could a nuclear flashpoint.

Pakistan intends to use the international summit on Afghan refugees for bringing back the lost donor focus on the world’s largest refugee population. It will call attention to consequences of the protracted crisis and galvanise progress towards a resolution. Wars bring untold miseries on human beings. Apart from the tragedy of dying soldiers and innocent men, women and children, also horrific and dreadful is the life of those who are rendered homeless and who have to leave their beloved places in search of unknown destinations and an uncertain future. No one puts their children in a boat unless the water is safer than the land.