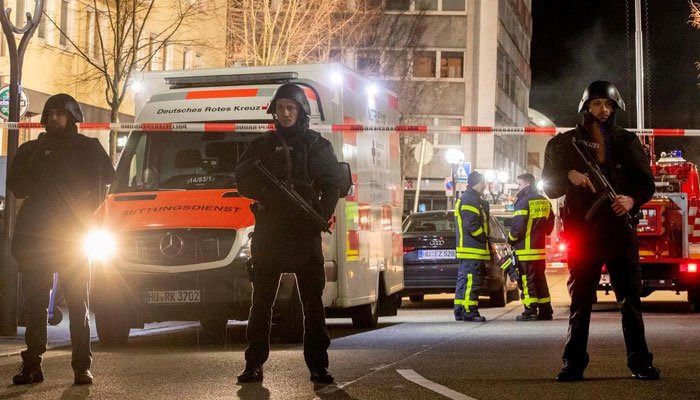 HANAU: A suspected right-wing extremist shot dead nine people, some of them migrants from Turkey, in an overnight rampage through a German city before killing himself, officials said.

The attack late on Wednesday targeted two shisha bars in Hanau, a town close to Frankfurt in the western state of Hesse.

Police chased a car used to leave the scene of one shooting to its owner’s address, where they found the bodies of a 43-year-old German man and his 72-year-old mother, Hesse interior minister Peter Beuth said.

Federal prosecutors said they had taken charge of the case due to indications that the attack had an extremist motive, and newspaper Bild said the suspect had expressed far-right views in a written confession.

In shisha bars, customers share flavored tobacco from a communal hookah, or water pipe. In Western countries, they are often owned and operated by people from the Middle East or South Asia, where use of the hookah is a centuries-old tradition.

Some of those killed were of Turkish origin, a spokesman for the Turkish presidency said. “We expect German authorities to show maximum effort to enlighten this case. Racism is a collective cancer,” Ibrahim Kalin said on Twitter.

German magazine Focus cited security sources as saying many of the victims had an immigrant background.

Germany’s political landscape has been polarised in recent years, with a wave of immigration and a slowing economy helping to fuel support for extremist groups at both ends of the spectrum.

In October, an anti-Semitic gunman opened fire outside a German synagogue on Yom Kippur, the holiest day of the Jewish year, and killed two people as he livestreamed his attack.

Authorities have banned some far-right groups endorsing violence, while Germany’s post-war centrist political consensus has been undermined by growing support for the anti-immigrant Alternative for Germany (AfD) party, notably in the former-Communist eastern states.

The mayor of Hanau, Claus Kaminsky, told mass circulation Bild that it had been “a terrible night”.

“You could not imagine a worse night. It will of course keep us busy for a long, long time and remain a sad memory.”

“I am deeply moved. Just the fact that eight people have lost their lives has shaken me up. But I ask all citizens not to speculate. The police must have the chance to clear up the situation and investigate — until then, we should wait with prudence, no matter how hard this may be.”

MP for the region, Katja Leikert said it was “a real horror scenario”.

“On this dreadful night for Hanau, I would like to express my deepest condolences to the relatives of those killed. I hope the injured will recover quickly,” she said.

Germany has been targeted in recent years by several extremist attacks, one of which killed 12 people in the heart of Berlin in December 2016.

Far-right attacks have become a particular concern for German authorities.

Last June conservative politician Walter Luebcke, an advocate of a liberal refugee policy, was shot at his home.

On Friday police arrested 12 members of a German extreme right group believed to have been plotting “shocking” large-scale attacks on mosques similar to the ones carried out in New Zealand last year.

German-Turkish Islamic organisation Ditib, which funds around 900 mosques in Germany, called for greater protections for Muslims in the country, saying they “no longer feel safe” in Germany.