Panic as death toll from toxic gas leak rises to 14 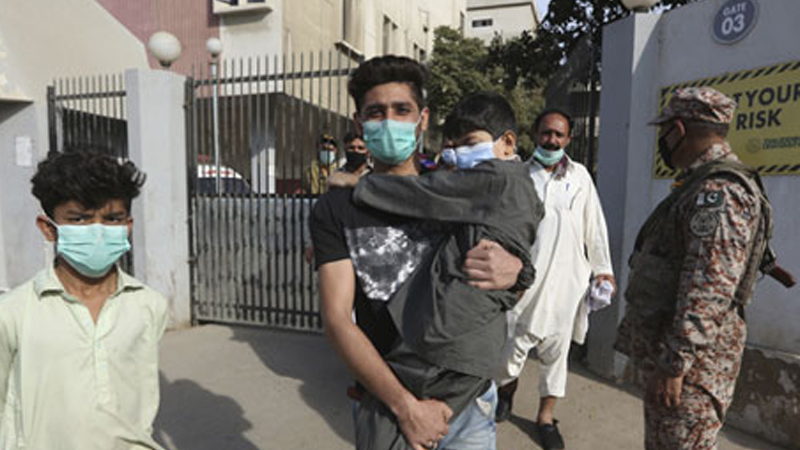 A purported gas leak in Karachi has killed 14 people and sickened hundreds more, health officials said Tuesday, as panic gripped in the affected area and the authorities called in chemical and nuclear specialists from the armed forces to detect the source of the leak.

The leak set off a panic in Karachi and raised concerns because officials could not immediately identify the source and the type of gas involved.

Zafar Mahdi, a senior health official, put the death toll at 14 on Tuesday.

Authorities said they were planning to evacuate residents from Keamari to safer places. Hundreds of residents rallied Tuesday demanding the source of the leak be traced quickly. All of the stricken people – hospitals said they had treated more than 650 – were residents of Keamari.

The International Center for Chemical and Biological Sciences (ICCBS) on Tuesday advised the government to consider ‘exposure to soybean dust (aeroallergens)’ as a cause of breathing difficulties being faced by residents of Keamari. A letter sent to Karachi Commissioner Iftikhar Shallwani by Dr Iqbal Choudhary, the director of ICCBS, said the lab has examined blood and urine samples of people ‘exposed to toxic aerosols’ as well as soybean dust samples collected from the port area. Dr Choudhary said that while the ICCBS is still ‘extensively engaged in deciphering the cause of this toxic exposure’, the findings so far suggest that the symptoms being experienced by Keamari residents are a result of ‘overexposure to soybean dust’.

The lab suggested that hospitals should give bronchodilators and antihistamines to affected people. the ICCBS also advised that ‘extreme care’ be taken while unloading soybean containers.

Earlier in the day, one person was admitted to a hospital from Lea Market area, raising concerns that the incident may not be a ‘localised’ one, as claimed by Commissioner Shallwani. However, Sindh Health Ministry said the affected person was a worker at the port, adding that the government will issue an advisory on Wednesday.

The specialists from the armed forces will be investigating the reported gas leak and determine the source of the deadly agent which has taken a toll on area residents over the last three days. The most affected neighbourhoods in the locality are Bhutta Village, Jackson Market, Tara Chand Road and GR Railway Colony.

A number of households in the affected area have evacuated on self-help basis and moved to residences of their relatives. Schools in the area have also been closed until further notice. Hospitals within Karachi’s district South have been put on alert by the provincial government to deal with an influx of casualties if need be.

Most people affected by the lethal gas were brought to Ziauddin Hospital and Karachi Port Trust (KPT) Hospital over the past 24 hours. Some others were shifted to Dr Ruth KM Pfau Civil Hospital Karachi, Jinnah Postgraduate Medical Centre (JPMC), Kutiyana Memon Hospital and Burhani Hospital. Doctors said the patients complained of breathing problems, respiratory issues, stomach ache, burning sensation in eyes, and a tightness in the chest.

Earlier, a team of Pakistan Navy’s Nuclear, Biological and Chemical Defense (NBCD) also conducted an investigation into the possible source of toxic gas leakage in the port area. However, no details of the findings were made public.

At a news conference KPT Chairman Rear Admiral (r) Jamil Akhtar said neither any oil vessel nor any facility at the port could be blamed for the poisonous gas leakage. “If there had been a leak from the port, then the first affectees would be the people working there. Here we are in front of you,” he had said, adding that he was not in a position to state the source or origin of the leak as the NBCD team had not provided any results yet.

Authorities were alerted to the situation when people in the Keamari area began rushing to nearby hospitals with severe breathing problems on Sunday night. The concerned authorities were not sure about the exact cause of the incident.

The next day, on Monday, Shallwani had informed a Sindh cabinet meeting that a ship that was offloading soybean or a similar substance could be the probable cause of the toxic gas. “When offloading from this ship is halted, the smell too diminishes,” he had reasoned.