Kartarpur a ‘glaring example’ of Pakistan’s desire for peace: UN 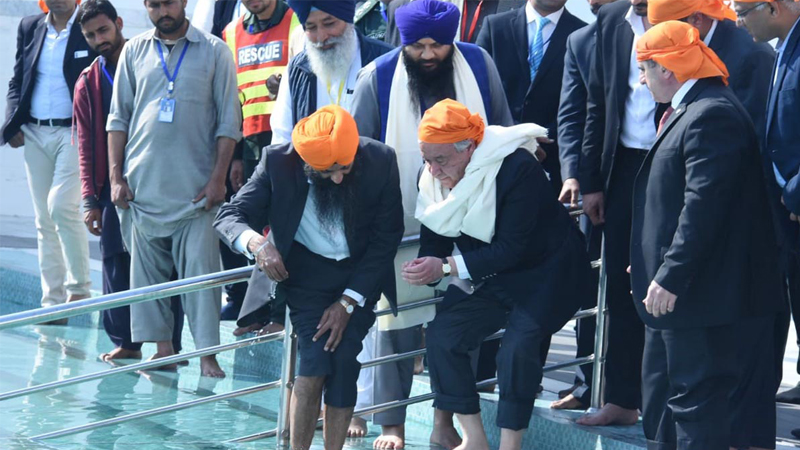 United Nations Secretary General Antonio Guterres on Tuesday appreciated Pakistan for its efforts and effective measures to restore peace and promote interfaith harmony in the region.

He acknowledged this fact during his visit to Darbar Sahib Kartarpur, recently developed and opened up by Pakistan for Sikh community from across the world, in Narowal district of Punjab.

The UN secretary general remarked that Kartarpur Corridor project is a glaring example of Pakistan’s advocacy for peace and interfaith harmony in the world in general and in the region in particular. He was confident that Karturpur Corridor will further harness peace, tolerance, love, brotherhood and interfaith harmony not only in the region but also the world over. He also appreciated the facilities being provided by Pakistan government to Sikh Yatrees and general visitors at Darbar Sahib Kartarpur.

While wearing an orange scarf, a tenet of Sikh religion, Antonio Guterres took a round of various sections of Darbar Sahib. He was also served with traditional food in lunch. While a good number of Sikh Yatrees from India was also present.

It is to mention that law enforcement agencies put a foolproof security apparatus in place in and around the Darbar Sahib Kartarpur.

Separately, during a meeting with students from various institutions on ‘Role of Youth in UN of 21st Century’ at LUMS, Guterres stressed the need for greater participation of youth besides gender parity within the political systems as well as international organizations to effectively address issues like global warming, unfair globalization, unregulated new technologies and conflicts in the world. He said it has become necessary to engage young people in order to promote institutional dialogue in democracies. “Permanent inter-flow of communication between the political society and civil society is the basis of modern democratic system,” he observed.

The UN secretary general said that presence of youth is absolutely essential in the corridors of power where decisions are made, policies are defined and actions get implemented. He regretted that his generation didn’t succeed in achieving desired goals to reverse emergency in climate change, fair distribution of resources among all segments of societies, regulation of new technologies and avoiding conflicts.

Terming climate change defining issue of the age, Guterres said, “We do not have the political will to reverse the climate emergency, we live in despite being citizens of a global world.” He said the world today is faced with the challenges of record increase in levels of gaseous emissions in the air, land and sea, rising temperatures, soaring water levels due to melting of glaciers. “There is a war between humans and the nature and the nature is striking back with enormous power,” he observed, adding, “We have not yet taken necessary decisions to reverse this effect.”

The UN secretary general said as a world body, “we must ensure that the temperatures don’t rise more than 1.5 degrees, and the carbon emission remain low in the next decade.” Guterres said UN’s ‘Youth Climate Summit’ in September last year was a means to force politicians to understand that things have to change on climate. He said mobilization of the youth is important as the climate challenges are to effect more adversely to the young generations in the coming decades. Regarding globalization, he said, “Despite producing enormous benefits to the world in trade etc, globalization has produced increase in poverty levels which is a threat to the social cohesion of societies.”