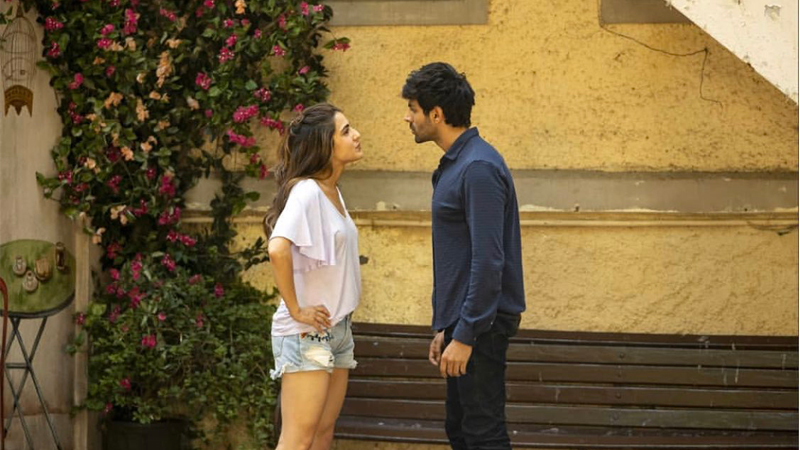 Tum Mujhe Tang Karne Lage Ho’ is my takeaway from this complex, emotional jigsaw puzzle which is far away from the 2009 namesake (Love Aaj Kal). Can’t agree more with Saif Ali Khan when he reacted to the trailer first.

Yes, the original was better and how!

This ‘Love Aaj Kal’ presents two sides of the same coin- intense love. Yes, the timezones are different, the characters are different but the essence remains the same. So, we meet a 22-year-old career-oriented, focussed and chilled out Sara Ali Khan as Zoe in a night club, dancing her heart away. Her eyes meet a geeky Kartik Aaryan (Veer) – the quintessential Imtiaz Ali hero who is struggling in his head between the perfect and not-so-perfect life. There is a whiff of existential crisis in his living as well, compelling the viewer to not take it as a breezy romantic drama.

They head for a quickie but Veer stops as he feels they are ‘underutilising’ the precious moment and sees Zoe as the perfect one for him. It looks good for a while as a viewer but after a point, you feel too many emotions riding high in your own head.

Randeep Hooda as the ever romantic Raj is interesting as he knows the nick of his trade and acts as a narrator (not literally though). He is the one who binds the two tales from different time zones. It’s his presence which helps you understand the absurdity in situations.

Debutant Aarushi Sharma as Leena (Randeep’s love interest from the younger days) is the girl-next-door we all have seen in real life too. But there is a spark in her in character which is fearless at the same time.

The characters are written well but that’s only on paper, dear. Once the screenplay moves it leaves you confused with too many ‘whys and what and how’, you know this one is a troublesome affair.

Zoe ‘s inability to strike a work-life balance will find a connect with the audience of the same age group but like they say excess of everything is bad-as an Imtiaz Ali fan, I missed the soul-stirring romance he brings to screen otherwise.

Veer will remind you of Ranbir Kapoor from ‘Tamasha’, Shah Rukh Khan from ‘Harry Met Sejal’. Why? Because somewhere there is a battle of complexities running in a similar vein in Imtiaz’s male characters. 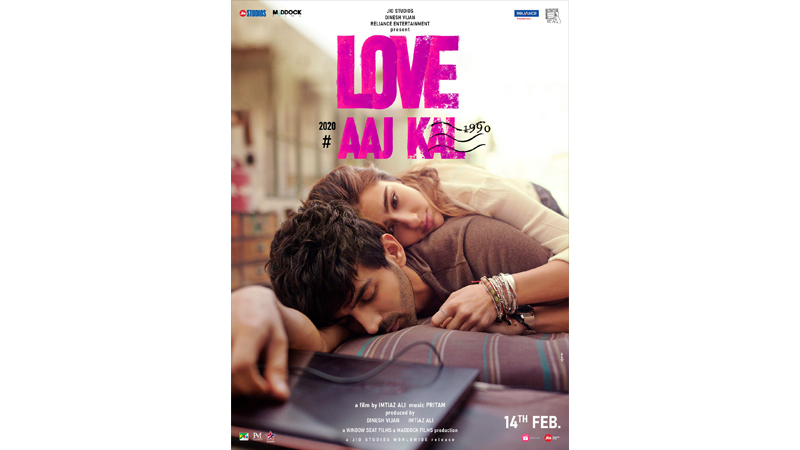 Yes, they are similar.

It would have been an experience to watch Veer in Kartik’s way and not Ranbir Kapoor.

Amit Roy’s cinematography runs smoothly and plays a key role in letting the complex story flow. But this time music composer Pritam fails to impress. Other than, ‘Shayad’ and ‘Parameswara’, no other song clicks the way it should have since it’s a romantic drama. It must have been a tough job for editor Aati Bajaj to keep the narrative in place, given it’s a non-linear watch.

The movie does touch upon the reality of human relationships, forced bonds, infidelity and lack of commitment in modern times but it further leaves the viewer exhausted, confused and unsettled.

PS: Watch it only if you are a fan of the filmmaker or the actors. Also if you are single on Valentine’s Day and want to feel good about it!

Love Aaj Kal (transl.?Love these days) is a 2020 Indian Hindi-language romantic drama film directed by Imtiaz Ali and starring Kartik Aaryan and Sara Ali Khan. Principal photography began in the first half of March 2019 and ended in July 2019. It was released in India on 14 February 2020 on Valentine’s Day.