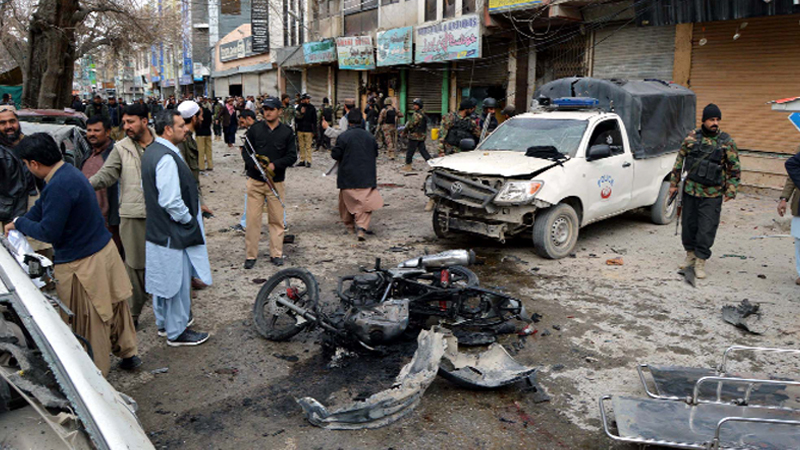 At least 10 people were killed in a suicide blast that hit a police vehicle in Quetta on Monday, officials said.

Two police personnel were among those killed in the blast. “We have received 10 bodies so far and 35 injured in Civil Hospital,” a hospital official said.

The suicide bomber wanted to target rally of a religious group, but blew himself up when police stopped him, Abdul Razzaq Cheema, Quetta police chief, told reporters.

Police said the blast went off near Quetta’s press club where dozens of supporters of Ahle Sunnat Wal Jammat had gathered outside. Hospital officials say some of the wounded persons were listed in critical condition.

Cheema said dozens of religious party members were rallying to pay tribute to Islam’s first caliph when the bomber blew himself up there. Footage on social media appeared to show the explosion ripping through the local bazaar, sending people running for shelter. The bombing destroyed some nearby shops and vehicles, police said.

Taking notice of the incident, Prime Minister Imran Khan grieved the loss of human lives in the blast. He also directed the authorities concerned to provide the best medical treatment to the injured.

Balochistan Chief Minister Jam Kamal Khan directed provincial IGP to submit a report within 24 hours. Balochistan Governor Amanullah Khan Yasinzai also condemned the blast and said, “Such a cowardly attack can’t weaken the morale of the nation and the security forces.” In a statement, the governor maintained that measures should be taken to foil the nefarious designs of militants, adding that law enforcement agencies should take stern action against such elements. “Foolproof security measures should be ensured across the province for the protection of the masses,” he said, and directed the provincial health department to provide the best possible medical facilities to the injured victims.

Ambassador of Japan to Pakistan Matsuda Kuninori also strongly condemned the bomb attack and expressed condolences to the families of the victims, according to an official statement. “My thoughts and prayers are with the grieving families. Almighty Allah may give you strength and patience to bear this difficult time”, the ambassador said. “No act of terrorism can be justified. Japan strongly condemns terrorism in all its forms and manifestations and is firmly committed to continue supporting efforts by the government of Pakistan to fight against terrorism,” he added.