‘World should look towards Pakistan with new perspective’ 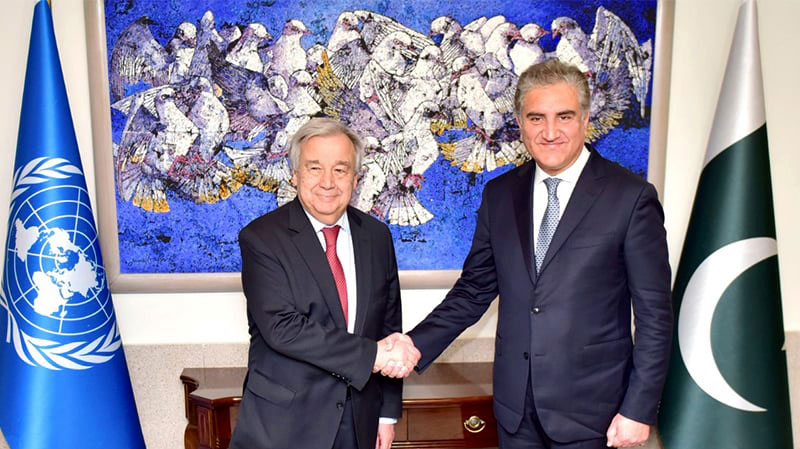 United Nations Secretary General Antonio Guterres on Sunday commended Pakistan for its immense contributions in strengthening the United Nations charter and objectives across the globe, terming Pakistan as a reliable partner and committed member of the world body.

In a joint press stakeout along with Foreign Minister Shah Mahmood Qureshi, the UN secretary general said Pakistan had been playing a leadership role in the region with its peaceful efforts especially in facilitating the Afghan peace and reconciliation process.

He said Pakistan and its people had been showing generosity by hosting millions of Afghan refugees on its soil for decades despite limited international aid.

Guterres said he always found Pakistan’s commitment and support to the UN charter and objective very impressive and permanent.

He urged the world community to look towards Pakistan with new perspective as it had been progressive and developing under the principles of its founder Quaid e Azam Muhammad Ali Jinnah and the ideals of Allama Muhammad Iqbal.

“We believe that your sacrifices will come to fruition and you will also get liberation from the oppression and Indian subjugation,” the foreign minister assured the Kashmiri people.

Mentioning purpose of his visit, the UN chief said it was aimed at acknowledging the great generosity and hospitality that Pakistan extended to Afghan refugees for years.

About his meeting with Pakistan foreign minister, he said they had discussed a number of issues, including the regional security and Afghan peace process.

The UN secretary general also appreciated Pakistan’s peacekeeping role under the banner of UN around the world, noting that its peacekeeping missions were serving with commitment under the UN charter.

He also acknowledged Pakistan’s efforts in eradication of terrorism saying that the country was now fully safe and secure. About Kashmir dispute and ceasefire violations by India, he reiterated the need to de-escalate the tensions and stressed that dialogue and diplomacy should be the tools for resolution of issues. He also urged for ensuring respect to human rights of Kashmiri people in the Indian Occupied valley.

About Afghanistan peace process, he maintained that a peaceful well negotiated political solution and effective permanent ceasefire were crucial for securing durable peace in Afghanistan which would further the repatriation of Afghan refugees with dignity. Guterres further said the United Nations Military Observers Group (UNMOG) in India and Pakistan were monitoring the ceasefire violations along the Line of Control.

He also appreciated the opening of Kartarpur Corridor and said it was a symbol of interfaith harmony, peace and tolerance and manifestation of Pakistan’s efforts towards regional peace.

Foreign Minister Shah Mahmood Qureshi said that he had very intensive and fruitful meeting with the visiting UN Secretary General. The foreign minister said they had agreed on a time bound roadmap for repatriation of Afghan refugees, in assistance with the international community. Reaffirming Pakistan’s support for peace and reconciliation in Afghanistan, he said it was committed to its efforts as peace in the neigbouring country was vital for the regional stability.

He said now Pakistan was looked upon as part of the solution parting ways with its perception of the past as being a part of the problem. He also reiterated Pakistan’s commitment with the objectives and charter of the UN, saying that multilateralism was a forum for fostering cooperation and interfaith among the world community instead of unilateralism as manifested by India in her illegal act of August 5 last year over the internationally recognized Kashmir dispute. The minister said he had also conveyed Pakistan’s concerns over the evolving situation arising out of that unilateral act by the Indian government. He said all shades of Kashmiri people, its leadership and even Indian people had rejected that move. Even against the controversial citizenship acts, chaos erupted across Indian in which so far 25 people were shot dead by the Indian security forces, he added. Shah Mahmood Qureshi said more than 200 days had passed since the siege and lockdown was clamped on the Indian Occupied Kashmir, where people had been deprived of their basic human rights and subjected to worst inhuman conditions. He maintained that the UN Secretary General was the custodian of UN charter and they had certain expectations from him to be fulfilled. He urged the UN Secretary General to reaffirm the UNSC resolutions on the Kashmir issue, besides highlighting the restoration of fundamental rights and freedom of movement, calling upon India to respect the 2003 ceasefire violations agreement. In reply to a question, both observed that Islamophobia was a threat to global interfaith harmony and the negative impacts from the hate speeches were the main cause of this menace now spreading in the West. They renewed their pledge to fight this threat at all fora. Qureshi said Kartarpur corridor was a symbol of interfaith harmony and tolerance when compared with the demolition of Babri Mosque in India. The minister said he had also shared with the UN chief certain development initiatives of the government over social security net including Ehsaas program, Sehat Sahulat cards and other steps in line with the sustainable development goals.