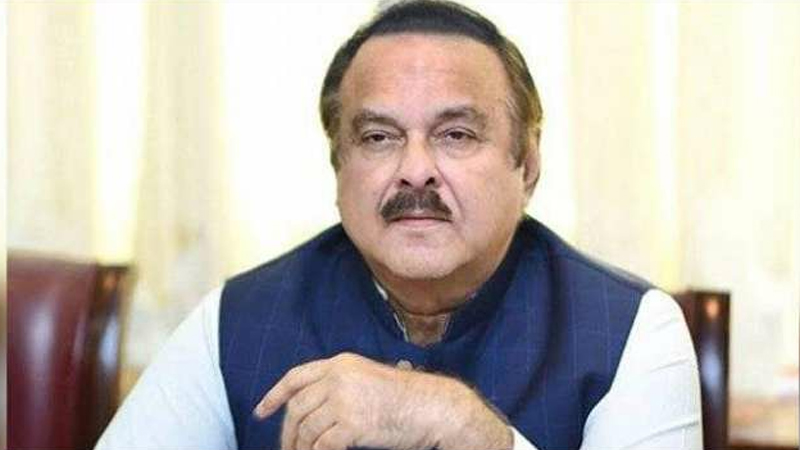 Pakistan Tehreek-e-Insaf (PTI) leader Naeemul Haque was laid to rest in Karachi’s Gizri graveyard, after his funeral prayer was held at Masjid Aisha, Khayaban-e-Ittehad in DHA, on Sunday evening.

Speaking to the media, Firdous paid rich tribute to Haque and said, “As a soldier on the frontline, he (Haque) not only defended Prime Minister Imran Khan’s narrative at every turn but also worked tirelessly to turn his (PM Imran’s) vision into reality.”

“We will not let his (Haque’s) cause die. PTI will keep his vision alive,” the SAPM vowed.

Haque, who was one of the founders of PTI, passed away on Saturday after battling cancer. He was 70.

Survived by a son and a daughter, Haque was diagnosed with cancer a couple of years ago but over the past few months, his health had started to deteriorate. He was moved to a hospital in Karachi during the first half of the day after his condition further destabilised.

Prime Minister Imran – who had called upon Haque at his residence earlier this month to inquire after the deceased leader’s health – said he was “devastated by one of my oldest friend Naeem’s passing”.

In a tweet, the prime minister said: “He was one of the 10 founding members of PTI and by far the most loyal. In 23 yrs of PTI’s trials and tribulations, he stood by me. He was always there for support whenever we were at our lowest ebb.

“In the last two years I saw him battle cancer with courage and optimism. Till the very end he was involved in Party affairs and attended cabinet meetings as long as he was able. His passing has left an irreplaceable void.”

Haque was the former central information secretary and one of the founding members of the PTI. He was also the former president of PTI’s Sindh chapter.

When the PTI came into power in 2018, he was appointed the Prime Minister’s Special Assistant on Political Affairs.

According to the Inter Services Public Relations (ISPR), the COAS prayed for the deceased and his family. On the other hand, Chief of Naval Staff (CNS) also expressed his grief over the sad demise of Special Assistant to the Prime Minister on Political Affairs Naeemul Haq.

In a message received from the Pakistan Navy Spokesperson, Chief of the Naval Staff extended his heartfelt condolence on the death of prominent politician Naeemul Haq.

“Very sad to hear about the passing away of Naeemul Haque. My profound condolences to the bereaved family and the PTI.”

Punjab Health Minister Dr Yasmin Rashid called the PTI senior leader “a true friend, a pillar and a patriot”. She also expressed condolences saying: “Terribly saddened that Naeemul Haque lost the battle to his illness. She added that Naeemul Haque fought valiantly for the cause of ‘Naya Pakistan’ and stood beside Prime Minister Imran Khan through thick and thin. Chief Minister of Punjab expressed deep sorrow and regret over the death of Naeemul Haque and extended his heartfelt condolences to the bereaved family. He lauded the unparalleled services of the stalwart for the party and called him a valuable asset. He added that they have lost a long and sincere friend and his services will be remembered.