Notwithstanding the consistent claims of Union Home Minister Amit Shah that everything is “fine and normal in Jammu and Kashmir (J&K)”, there appears to be an uneasy undercurrent still prevailing even after the lapse of six months, following the abrogation of special status under Article 370 on August 5, 2019.

Since the former two Chief Ministers-Omar Abdullah and Mehbooba Mufti- had completed their six months preventive detention, apparently it has become a bit difficult for the J&K administration to further retain them in custody, therefore, both of them were booked under the Public Safety Act on the night of February 6, barely a few hours before their preventive detention was to end. According to rules, preventive detention under PSA can be extended beyond six months only if an advisory board constituted two weeks before the completion of the 180-day period, recommends for that.

The arrest of two leaders under PSA were made after the administration’s persuasive methods had failed to get undertakings from them that they will not speak against abrogation of Article 370 and Section 35 A. The strong willed-Omar and Mehbooba Mufti, did not bend, even when they were informed that they would be put in Jail under the dubious PSA.

The arrest under PSA of several other senior J&K leaders (Media reports states more than 20) clearly indicates that the undercurrent of resentment has been continuously brewing in the Kashmir Valley, therefore, several more leaders have been put in Jail under the PSA. 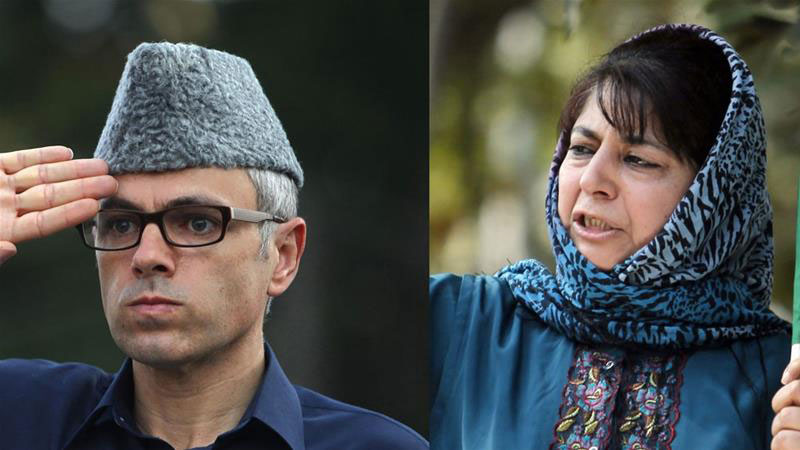 According to the dossier former chief minister Omar Abdullah’s “considerable influence” over people, including the ability to attract voters to polling booths despite poll boycott calls and the potential for channelling energies of the public for any cause has been cited in support of his detention under the PSA reports mention.

The 49-year-old Omar, who had served as India’s minister of state for external affairs as well as commerce and industries, states his ability to convince electorates to vote in huge numbers even during the peak of militancy and poll boycott calls by separatists and militants.

The grounds of detention against Omar, who was also the chief minister of the state from 2009-14, states that on the eve of reorganisation of the state he had made attempts to provoke general masses against the revocation of Articles 370 and 35-A.

The grounds also mention his comments on social networking sites to instigate common people against the decisions on Articles 370 and 35-A, which had the potential of disturbing public order.

Days after Mehbooba Mufti was booked under the stringent PSA, her daughter Iltija Mufti claimed the the same day that Mehbooba Mufti was slapped with the PSA as she refused to sign “an illegal bond that she would not issue any statements against the scrapping of Article 370 will be made”

However, the police have neither cited any of Omar’s social media posts in the dossier as a proof nor in the order for grounds of his detention.” To the people of Kashmir, we don’t know what is in store for us…….stay safe and above all please stay calm,” was the last few tweets of Omar before he was taken to Hari Nivas (Government guest House) for preventive detention.

His political opponent and Peoples Democratic Party (PDP) leader 60-year-old Mehbooba Mufti has been accused of making anti-national statements and extending support to organisations such as the Jamaat-e-Islamia of the state, which had been banned under the Unlawful Activities (Prevention) Act (UAPA).

The Mehbooba Mufti had been under preventive detention since August 5 last year, when the Centre announced the abrogation of Article 370.

Mehbooba has also been slapped with the PSA for her remarks which included challenging accession of Jammu and Kashmir to India in case the Article 370 was abrogated.

The statements of the former chief minister, whose party PDP was an ally of the BJP till June 2018, on security forces killing militants was also made a part of the PSA dossier against her.

Her support to the Jamaat-e-Islamia group of Jammu and Kashmir after it was declared as a banned organisation by the Centre under the Unlawful Activities (Prevention) Act (UAPA) also figures in the dossier.

Omar’s father, Farooq Abdullah, who was a five-time chief minister and currently a member of Lok Sabha, was booked in September last year under the PSA, a law which was enacted by his father Sheikh Abdullah in 1978 to fight timber smugglers in the state as they would easily get away with minimal detention those days.

Sheikh Abdullah brought the Act as a deterrent against timber smugglers as it provided a jail term, without a trial, for up to two years. However, this Act came in handy for the police and security forces during the early 1990s when militancy erupted in the state.

Days after Mehbooba Mufti was booked under the stringent PSA, her daughter Iltija Mufti claimed the the same day that Mehbooba Mufti was slapped with the PSA as she refused to sign “an illegal bond that she would not issue any statements against the scrapping of Article 370 will be made”.

The charges under which Mehbooba Mufti was booked under the PSA are unfounded and the PSA is due to detenue’s reluctance to sign an illegal bond that no statements against the scrapping of Article 370 will be made. Her daughter’s demand that the Government of India (GoI) should substantiate this with evidence for examples like BJP ministers who incited violence in Delhi with ‘Desh ke gadaron ko’ slogan followed by shootings.

There appears to be truth in Mehbooba Mufti’s daughter iltija charge that her mother had been put in jail under PSA after she declined to sign the bond for release and also assure to keep mum against the Abrogation of Article 370 and Section 35 A.

These undaunted leaders showed their strong will by refusing to sign bonds for their release. If they had done that their political carriers would have plummeted to zero ground. They would have last credibility with the Kashmir masses. Therefore, it is good for their political health to stay in jail for the unknown period, although their physical health may deteriorate by staying in jail confinement and lonely surroundings.

Iltija, who now operates Mehbooba’s Twitter handle, also questioned as to why the BJP was scared of a debate on Article 370. “However, the BJP can exploit Article 370, especially in election campaigns, including Delhi, but those most affected by it cannot utter a word. Why is BJP scared of a debate?” Iltija said in a series of tweets.

It is in a way an attempt to discredit these pro-India well established democratic leaders, and instead groom new leadership in J&K who wish to go with the present ruling/political dimensions in Delhi.

Moreover, not only democratically elected leaders but discontent among working journalists also vented out when Kashmir Press Club issued statement that present dispensation has muzzled the press.

Kashmiri journalists have also accused the police of harassing and intimidating them since August 5 last year. Their freedom is curbed and they were not being allowed to function independently. They have been forced to come to police station and appear before the area SHO’s and disclose the sources of news items published in their respective newspapers. Some of them were also kept in interrogation centres to pressurise them to seek information of their news sources, according to the report in Hindustan Times published with the New Delhi date line.

The Indian Express Editorial dated February 11, with head line “A BIZARRE CASE” states: the grounds on which the government has invoked the draconian Public Safety Act against former chief ministers Omar Abdullah and Mehbooba Mufti read like a fake WhatsApp forward. But the Union Home Ministry, no less, has peddled this misinformation to keep the two politicians in extended detention, raising serious questions about the bona fides of decisions taken by those in charge of the country’s internal security.”

The case against Mufti is as, if not even more, absurd, embellished with comparisons to a medieval queen for “her dangerous and insidious machinations and usurping profile and nature”. Mufti’s tweets and statements, conveying to the BJP, her then willing partner in the ruling coalition, that India would be left with no friends in Kashmir if Articles 370 and 35 A were revoked, have also been twisted and taken out of their political context.

It increasingly appears that the government has no plan for Kashmir that can be democratically or transparently implemented, and that it is counting on “national security”, or purported threats to it, to justify all actions. The J&K High Court has as good as abdicated its role by declaring last week it was “not a proper forum to scrutinise the merits of administrative decision to detain a person”. With this, the court, which even earlier quashed PSA cases only on procedural grounds, has effectively removed itself as the main remedy.

Abdullah’s sister has petitioned the Supreme Court on the PSA cases against the former chief minister, but the court’s track record does not offer confidence, the Indian Express editorial states.

An interlocutor Radha Kumar who worked on behalf of the Centre government for solution of the Kashmir problem point outs in her article in the Indian Express titled “Dissent as sedition” there is a stark contrast between the PSA against Abdullah and Mufti on the one hand and, on the other, the Narendra Modi administration’s complacence when its own ministers and MPs make incendiary statements accusing critics of being terrorists and calling for violence.

Keeping in view the above stated facts and developments, one can draw a conclusion that all is not well in J&K and its administration directly under the control of the union Home Ministry, is pushing the draconian laws to muzzle the dissenting democratic voices.

The writer is a senior journalist and Indo-Pak peace activist