Bilawal says he is being politically victimised for speaking against PTI

* PPP chief appears before NAB Rawalpindi, get questionnaire to respond to in two weeks
* Says Aseefa will lead party if he is illegally arrested 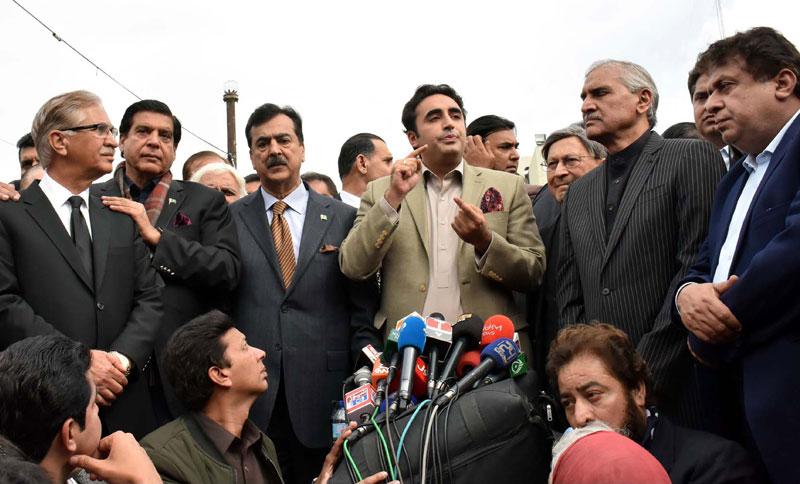 “The former chief justice had declared me innocent one year ago as I was not involved in any business activity,” the PPP chief told media after appearing before NAB in Rawalpindi, as he raised questions about why he was asked to appear before the accountability watchdog. He said he has presented himself before the authorities three times and also answered the bureau’s questions. “The last questionnaire was issued to me in May of last year. They had no objections […] all of a sudden what happened in December when the first notice was issued?” he said, and alleged that he was issued another notice right after PPP announced a campaign against the current PTI government.

“A notice is served to me over announcement of a march. I appeared before the NAB today (Thursday) despite reservations … I had answered their questions thrice in past,” he said. “Transactions between two private companies have nothing to do with NAB. No public office holder was involved in it and I was only seven years old when I became the company’s shareholder,” he maintained. “If I wasn’t even a public office holder at the time, what sense does it make that NAB summon me?” he asked, adding that he had a detailed talk with the NAB team and they have issued him a questionnaire. “Aseefa Bhutto Zardari will lead the party if I am illegally arrested,” he announced.

Strict security arrangements had been made around the NAB’s Rawalpindi office and all routes leading towards the old headquarters of the anti-corruption watchdog were blocked. Heavy contingents of police had been deployed to stop the possible entry of PPP workers inside the bureau’s premises. Various party leaders – including PPP Punjab President Qamar Zaman Kaira, former prime minister Yousuf Raza Gilani, PPP Senator Sherry Rehman and PPP Secretary General Nayyar Bukhari – and supporters had gathered outside NAB’s Rawalpindi ahead of Bilawal’s appearance. Addressing a press conference alongside other PPP leaders, Kaira said, “We’ve been speaking about the NAB-Niazi nexus, now courts are also speaking about it.” He said even courts are saying that NAB is ‘ill-prepared’.

Sherry Rehman said Bilawal cannot be made a party in the case the NAB is questioning him about as he was not a public office-bearer at the time.

In January 2019, the Supreme Court, while hearing the fake accounts case, had ordered that the names of Bilawal and Sindh Chief Minister Murad Shah be removed from both the exit control list and the joint investigation team’s report on a probe into the case. The court had also ordered that the case be forwarded to NAB and directed the anti-corruption watchdog to wrap up its investigation within two months.