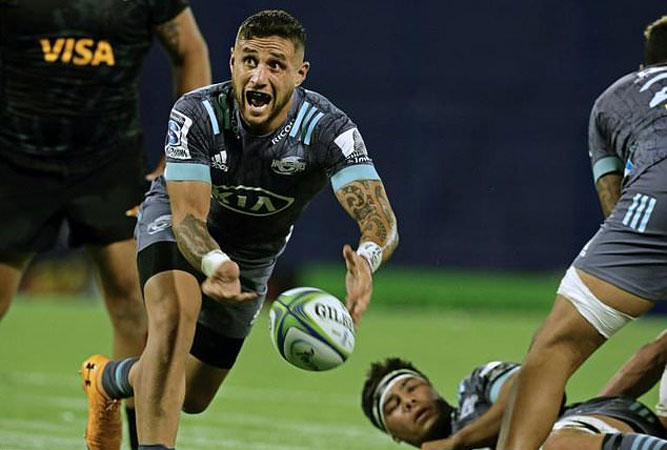 All Blacks half-back TJ Perenara was praised for his honesty after disallowing his own try during the Wellington Hurricanes win against the Jaguares in Buenos Aires last weekend.

Referee Rasta Rasivhenge was heard on live television asking Perenara whether he had grounded the ball under a pile of bodies. “Did you get it, TJ?”

“No,” replied the scrum-half, who has 64 caps for New Zealand. “Thanks for your honesty, TJ. That’s good leadership by you, thank you very much,” said the South African official. The Hurricanes were 23-12 down at the time but went on to win 26-23.

Coincidentally, Rasivhenge disallowed a Perenara try two years ago against the Northern Bulls for a knock-on and although TV replays proved inconclusive, Perenara also showed his sportsmanship. “If I had put it down more cleanly, then it’s a try,” he admitted. “But I didn’t, so it’s not.”

New Zealand Rugby are to review controversial rules that limit All Blacks players’ game time in the first three matches of the season.

As a result scrum-half Aaron Smith was benched in the 53rd minute just as his Otago Highlanders were trying to engineer a comeback against the Coastal Sharks in Dunedin before losing 42-20.

There was much hype when 2007 Rugby World Cup winner Jannie du Plessis quit Montpellier to join the Golden Lions with the 37-year-old tighthead prop considered a battle-hardened warrior.

The former Springbok was forced to back-pedal at numerous scrums, conceded four penalties and was taken off seven minutes into the second half as the Lions won 27-20.

“We need to fix a few things,” conceded Van Rooyen ahead of a home clash with high-riding Western Stormers this Saturday. Du Plessis may be top of that list.

Robinson said a TV deal till 2025 was in place and South Africa were actively engaged in talks about the long-term future of Super Rugby and the Rugby Championship.

“They are people that we trust and they’ve been great partners over the last 25 years,” he said. “We would like to think that we would be privy to those sorts of comments or conversations.”

Auckland Blues are “excited” about their prospects ahead of hosting the Canterbury Crusaders on Friday in one of the fiercest rivalries in the competition, despite losing their 10 matches against Super Rugby’s defending champions.

“When the Super Rugby schedule comes out you always look first for the Crusaders game,” said Blues coach Leon MacDonald who made 122 appearances for the 10-time champions Canterbury between 1997 and 2009.

“They are the benchmark. It is the game where the hairs on the back of your neck bristle. I know the boys are excited.”

Jaguares fly-half Domingo Miotti is the unlikely pacesetter in the 2020 Super Rugby points scoring charts ahead of a visit from the Queensland Reds, having been on the bench for the Argentina side when the season kicked off.

Coach Gonzalo Quesada originally opted for Joaquin Diaz Bonilla as his first-choice playmaker, but he was injured a few minutes into the clash with the Golden Lions in Buenos Aires.

Enter Miotti, who scored 18 points in the rout of the Lions and another 13 in last weekend’s defeat to Wellington Hurricanes

“Losing Joaquin so early was a serious blow, but the silver lining has been the great form of Domingo,” said skipper and scrum-half Tomas Cubelli.

Experienced Wallabies centre Reece Hodge says the key to ending the Melbourne Rebels’ winless start to the season lies in his own hands when they host the NSW Waratahs on Friday.

“I haven’t got my hands on the ball enough, so I need to find a way to get involved a bit more and help the team as much as possible,” he said after defeats to the Sunwolves and the Brumbies where the Rebels conceded big early leads.

They a winless Waratahs who traditionally fare well against the Rebels. The Melbourne side have won only two from 17 against the Sydneysiders.