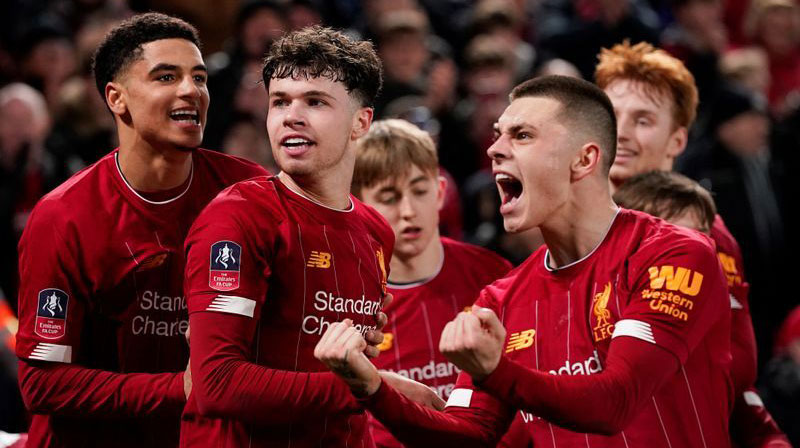 LONDON: Liverpool manager Juergen Klopp, it seems, can do no wrong after his youngsters vindicated his decision to rest his entire first-team squad by beating third-tier Shrewsbury Town 1-0 in their FA Cup fourth-round replay at Anfield on Tuesday. Klopp, whose side are 22 points clear and heading for a first English league title for 30 years, was not even in attendance but would have been smiling as Ro-Shaun Williams’s unfortunate 75th-minute own goal sealed victory and a fifth-round clash with Chelsea. Seven-times winners Liverpool, whose starting lineup was the youngest in the club’s history, were given a let-off as League One Shrewsbury, backed by 8,000 fans, had a goal ruled out via VAR with the score 0-0.

But they were worthy winners and the youngsters received a standing ovation as they steered Liverpool into the fifth round for the first time since Klopp took over in 2015. “It was just unbelievable,” 18-year-old Neco Williams said. “It was a night that we will remember for a long time. “Hopefully we will do the same against Chelsea in the next round. Every team Liverpool put out will put everything out there on the pitch.” Wayne Rooney will face his old club Manchester United in the fifth round after he netted a penalty for Derby County in their 4-2 win over fourth-tier Northampton Town.

Newcastle United edged past third-tier Oxford United 3-2 thanks to a superb extra-time winner by Allan Saint-Maximin. Steve Bruce’s side, held at home, had been cruising with goals by Sean Longstaff and Joelinton. But Oxford hit back through Liam Kelly and Nathan Holland’s sublime volley in the fourth minute of stoppage time sent the tie into 30 minutes of extra time. Newcastle have reached the fifth round for the first time since 2006 and will face Championship side West Bromwich Albion. The night’s other replays were decided by penalties with Reading beating Cardiff after a 3-3 draw. Birmingham City edged out Coventry City after it finished 2-2 after extra time.

Reading host Sheffield United while Birmingham, who needed a stoppage time Harlee Dean equaliser, travel to Leicester City. After his side squandered a two-goal lead to draw 2-2 at Shrewsbury, Klopp had vowed that no first-team players would feature in the replay as it fell during the inaugural Premier League winter break. As against Aston Villa in a League Cup quarter-final in December, when the first-team squad were at the FIFA Club World Cup, he gave under-23 manager Neil Critchley the reins. On that occasion Liverpool’s ‘kids’ suffered a 5-0 loss, but they proved too technical for Shrewsbury.

Critchley’s side, with an average age of 19 and only Curtis Jones and 16-year-old Harvey Elliott having any Premier League experience, gave Shrewsbury a lesson in passing and movement in the first half without much of a goal threat.

Shrewsbury, who have twice reached the last eight and knocked out Everton in 2002-03, improved after the break and their fans were in raptures when Shaun Whalley headed in from close range, only for their cheers to be silenced when a VAR check ruled the effort out for offside. Liverpool, unbeaten in 40 games at Anfield in all competitions, are next in action away at Norwich City on Feb. 15 when Klopp’s seniors return to continue their title procession. Judging by Tuesday’s display, the future looks as bright as the present at Anfield.